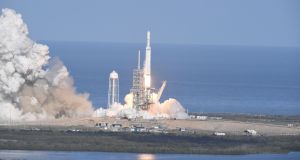 The SpaceX Falcon Heavy takes off from Pad 39A at the Kennedy Space Center in Florida, 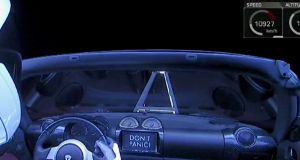 Behind the wheel: The Tesla heading for Mars

It looked like science fiction, but it was happening right in front of our eyes, complete with a David Bowie soundtrack. Elon Musk, owner and chief executive of both electric car maker Tesla and space launch company Space X decided to bring both halves of his empire together to demonstrate the capabilities of the new Falcon Heavy rocket.

Significantly, the launch took place from the famed Pad 39A of the Kennedy Space Centre in Florida, the same launch pad that saw Neil Armstrong, Buzz Aldrin, and Michael Collins fired at the Moon in July 1969.

The biggest and most powerful rocket launched since the heady days of Apollo and the mighty Saturn V, the Falcon Heavy uses 27 separate ‘Merlin’ rocket engines to develop 22,819-kilo-newtons of thrust. That means that it can lift a total payload of some 64-tonnes into low Earth orbit or geosynchronous orbit (by comparison the now-retired Space Shuttle could heft 24-tonnes into orbit). Or it can fire a relatively lightweight Tesla Roadster sports car towards the planet Mars.

As far as attention-grabbing car launches go, this was the most literal, and arguably the most spectacular. The Falcon Heavy and its Roadster payload accelerating to speeds beyond 20,000km/h to break away from Earth’s gravity and speed for a Mars flyby.

That’s not even the top speed. In fact, to reach Mars, the Roadster will continue accelerating away from the Earth, eventually reaching a peak speed of 11km/second (that’s 39,600).

The Roadster has a passenger - a dummy astronaut dubbed Starman - and sends an appropriate message to the stars; the car’s infotainment screen displays the worlds ‘Don’t Panic’ in tribute to Douglas Adams’ Hitch-Hikers’ Guide To The Galaxy.

Just moments after liftoff, the two side booster rockets separated from the main Falcon vehicle, and autonomously flew themselves back to Kennedy Space Centre for a controlled landing. The re-usability fo Space X’s rockets is key to the company’s plans to make spaceflight more affordable, and eventually more commonplace. As we went to press, we were awaiting confirmation that the third, centre-core, stage had successfully pulled off a landing on a remotely-operated barge, floating out in the Atlantic Ocean. The camera monitoring the touchdown cut out just, but Space X said that this was expected, as the vibrations of the descending rocket often play havoc with the antennae.

Even if the centre-core landing fails, it’s hard not to be impressed by what Space X has achieved here. The launch of the most powerful currently available space rocket, delivering a cargo not just to Earth orbit, but actually blasting it towards Mars, yet recovering significant portions of the launch vehicle to be re-used again and again.

Elon Musk may have a reputation as something of a snake-oil salesman, and Tesla cars have been coming in for severe criticism for their quality levels from independent testers in the past week, but you certainly can’t fault the ambition, nor the sheer chutzpah of both Space X and Tesla.

And it was all set, all but inevitably, to the strains of David Bowie’s Life On Mars.