Cullinan, named for the famous diamond, will be Rolls’ first 4x4 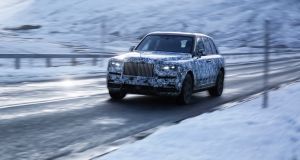 The Rolls Royce SUV: coming to a country estate near you this summer.

We’ve known it to be in the works for the past three years, known that Rolls-Royce was about to follow the leads of such as Bentley, Lamborghini, and Porsche by creating an SUV. Or a 4x4. Or, as Rolls-Royce internal nomenclature would have it, a ‘high-sided vehicle.’ Much like referring to the power output of its cars with a delightfully old-school ‘adequate, sir.’

Well, now the top-hat Rolls has a name and it’s Cullinan. Actually, that has been its name all along, Project Cullinan, given as a code-name once development of this behemoth started. Now, though, it has been adopted as the official name for the production version,

It comes from the famed Cullinan diamond, the largest gem-quality rough diamond ever found - which makes you suspect that Rolls is softening us up for just how gargantuan this thing is going to be. The diamond, found in South Africa, was eventually presented to Britain’s King Edward VII and cut to form the centrepieces of the sceptre and crown of the royal family’s crown jewels.

The Cullinan car will not be mounted on a plinth at the Tower Of London, but will instead be based on the same aluminium spaceframe chassis as the current Phantom saloon (a platform to which Rolls refers as ‘The Architecture of Luxury’) and borrow that car’s 6.75-litre turbocharged V12 engine. A plugin hybrid version will also likely be eventually made available, although it won’t be on offer when the car is revealed in full later this year. It will also share some components and parts with BMW’s super-luxury X7 SUV, which will itself be launched soon.

“The name Cullinan has been hiding in plain sight since we revealed it as the project name some years ago,” comments Torsten Müller-Ötvös, chief executive officer of BMW-owned Rolls-Royce. “It is the most fitting name for our extraordinary new product. Cullinan is a motor car of such clarity of purpose, such flawless quality and preciousness, and such presence that it recalibrates the scale and possibility of true luxury. Just like the Cullinan Diamond, the largest flawless diamond ever found, it emerges when it is perfect and exists above all others.

“We were inspired by the epic processes, over many millennia, which went into the creation of the Cullinan Diamond. The name embodies the many facets of our new motor car’s promise. It speaks of endurance and absolute solidity in the face of the greatest pressures; it tells of rarity and preciousness and it alludes to the pioneering, adventurous spirit of The Hon. Charles Rolls and the engineering innovation of Sir Henry Royce; and, of course, it speaks of absolute luxury, wherever you venture in the world. Quite simply, the name Cullinan is perfect and brilliant.”

A diamond amongst rough-cut SUVs? We shall see…