Disbelief at plan for German taxpayers to pay for Dieselgate 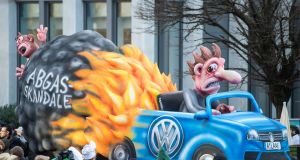 German environmental and consumer groups have reacted with disbelief to a suggestion that taxpayers should pay for the cost of fixing the Dieselgate fallout.

On Friday a leaked government committee paper suggested that public money be used to finance engine retrofits in a bid to drive down the levels of air pollution caused by diesel engine emissions.

The leak comes a week before a closely watched court case to examine whether Düsseldorf and around 40 other German cities in breach of EU air quality rules can be forced to impose inner-city bans on diesel engines.

The committee that wrote the leaked paper was established by the federal government after a Dieselgate meeting with German car industry executives last autumn. At that meeting Volkswagen chief executive Matthias Müller, backed by heads of BMW and Mercedes parent Daimler, refused to consider the cost of hardware fixes, estimated to be around €1,500 per vehicle. Instead they have begun recalling vehicles for far less expensive – and less efficient – software tweaks.

Germany’s acting chancellor Angela Merkel has held back on forcing car companies to recall their own vehicles for a hardware fix, suggesting it would take too much time in Germany’s battle against noxious city air. Now a committee set up by her government has recommended retrofits financed “entirely or to the greatest possible proportion” by a government subsidy.

The finding, in a preliminary report leaked to the Süddeutsche Zeitung daily, will be discussed at a meeting on February 28th.

Time is running out for finding a solution to chronic air pollution in German cities. One of the greatest problems is nitrogen-dioxide from cars fitted with illegal software that ramps up emissions in on-road situations and throttles emissions in tests.

Niklas Schinerl of Greenpeace Germany attacked the proposal for protecting an industry that, “despite over two years of never-ending scandal is still making multi-billion profits”.

“Instead of delaying the death of a failed technology like diesel at public expense, the government must push ahead with the development of clean traffic. A far-sighted transport policy has to shape the transition to an age without the combustion engine.”