Has Opel come too late – and with too little – to the crossover party? 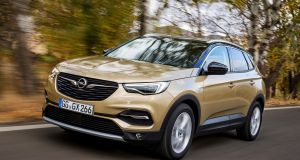 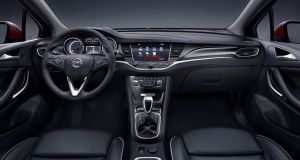 Opel’s fortunes seem to be far too closely aligned with Irish soccer. The brand was synonymous with the success of the national team in the Jack Charlton era, and sales boomed.

And just as the Republic’s fortunes waned so too have Opel sales. As our national team languishes on the couch during the World Cup, so Opel sales staff seem to be missing out on the top-tier new car sales battle. The all-important January sales statistics show the brand has slipped out of the top-10 best-sellers in Ireland.

Offloaded by General Motors, it’s now part of the French car group PSA, along with Peugeot and Citroen. The jury’s out on whether that’s the route to success.

There is a wide and varied range of reasons offered up as to why Opel has slipped off consumer shopping lists. But a key one is certainly a lack of competitive crossover SUVs.

From a company that did so well from selling people-carriers such as the Zafira and Meriva (with its quirky doors) it seemed as if mainstream European brands such as Opel weren’t enthused by the arrival of the new crossover class, largely led by Asian brands. These oriental upstarts were re-writing the rulebook and the old establishment were seriously irked.

Yet try as they might to remind people of just how good Opel’s Astra hatchback and Insignia saloons are, the public is fixated on all-things SUV. So Opel has delivered a trio of crossovers: the Mokka X, the Crossland X and the Grandland X.

It was not a promising start: the Mokka made a mockery of the beefed-up supermini class. Based on an ageing GM platform it was a half-hearted effort at best. And customers clearly see as much.

The Crossland X and Grandland X offer much more promise, largely because the underpinnings came via a co-operation with PSA, now Opel’s parent. For the Crossland, read Peugeot 2008. For Grandland read Peugeot 3008, winner of the prestigious European car of the year. Yet neither Opel seems able to match its French sibling. That raises some serious questions in a segment that can make or break a brand these days. The 2008 leaves the Crossland some way behind, but the Grandland admittedly makes a decent fist in its fight against the 3008.

I still struggle to see any of the mainstream crossovers as stylish, but whereas the Crossland is merely a mongrel of a high-roofed hatchback, the Grandland X at least looks like a crossover. However, it can’t overcome the fact that to allow for decent headroom in the back the roofline extends too far to please the eye.

The cab interior is smart but relatively conservative at a time when the world is awash with tech. Compare this to its French sibling and it feels like a generational shift. Our test car came fitted with the latest Opel offerings in terms of lighting systems and digital controls. It also featured OnStar system, well worth ticking as an option even if the assistants can’t access your sat-nav to input addresses on the Opel crossovers for some reason.

Yet compared to the 3008 it all feels too sober and bland. As with all these crossover brands, Opel hopes to sell this car to fashionable young buyers. I can’t see it.

Practicality is where this car should and can be pitched. It’s got good space in the back row of seats for family transport and the 514-litre boot is ample for any shopping trip. Drop the rear seats and you get 1,652 litres, which can swallow two full-sized bicycles and kit if you are so inclined.

Then there’s the real star of the show: a 1.2-litre turbocharged petrol engine putting out 130bhp. Yes, there is a diesel 1.6-litre on offer, but I can’t see why you would look further than this 1.2-litre three-cylinder livewire.

It would have seemed ridiculous to even consider anything but diesel in a crossover 12 months ago, but the world has changed. Forget about the official 0-100km/h time of 11.1 seconds: this feels a lot faster.

On a cross-Border run, the petrol Grandland not only proved it could outrun any diesel counterparts, it did so in a way that belied its size. It’s smooth, refined and a joy to drive. It’s also from PSA.

On the road, the car feels solid and the handling refined. It’s a pleasant drive and soaks up the bumps well while it doesn’t wallow too much in the bends. Opel claims to have stiffened the Grandland X and made it more sporty compared to the PSA equivalent, but most family buyers would opt for comfort over those traits in this type of car. Luckily for them, the sporty characteristics of the Grandland X are so subtle as to be invisible.

The Grandland X comes in three trim grades SC, SRi and Elite. SC comes with a good level of standard specification on 17-inch alloys but only gets Bluetooth phone connectivity – the higher grades get Apple CarPlay and Android/Auto.

Other options of note include a contrast roof colour, heated and cooled front seats, heated rear seats, adaptive headlights and a large sunroof. Some options are only available on the top trim Elite such as induction phone charging and a Denon premium sound system with eight speakers and subwoofer.

The problem for Opel is that it doesn’t just have to take to the pitch these days and expect sales orders to fly in, it has to play the match as well. And there’s a lot of talent out there running about already. Prices start from €27,995 for the petrol and from €28,995 for the manual diesel.

Those are good, but not as attractive as the starting points for the current kings of this class: the Hyundai Tucson (from €26,245) and the Nissan Qashqai (from €25,620). And then there is the award-winning Peugeot 3008 (from €25,995). Up against these prices the Opel is already starting with a handicap.

For someone with a soft spot for the Opel brand, it’s heritage and the fact it has a proven track record in producing well-engineered cars, it’s sad to see it slip. In football parlance it needs to be careful not to do a Leeds on it. The Grandland X is a vital addition but it’s not good enough to stop the rot or lead the brand’s revival. Hopefully it has something in the pipeline that is.

Verdict: A worthwhile consideration, but for Opel it’s late to the party and lacks any leadership quality in its class