Chinese-built car, designed by a Corkman, goes on sale in Europe in 2021 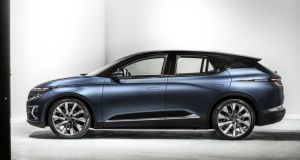 Byton, a Chinese-based upstart car maker, with one significant Irish connection, has shown the production-ready version of its electric, autonomous, M-Btye SUV at the Frankfurt motor show.

A rival to the likes of Tesla’s Model Y and the Audi e-Tron quattro, the M-Byte arrives with pretty sleek styling, and one major unique selling point — the biggest digital dashboard you’ve ever seen.

Inside the M-Byte is a colossal 48-inch information and entertainment screen — bigger than many household televisions; heck, it’s longer across that some fully-grown humans are tall — that stretches almost the fully width of the windscreen. It’s even curved, and Byton claims that its size and shape make it a world’s first.

On the outside, while the styling is generally speaking quite conventional, there are a couple of stand out points. The flush-fit door handles are a nice touch, but more significantly, Byton has said that it wants to create a style that reflects the importance of data power, rather than engine power — that’s why the side glass and shoulder line dips downward in a long curve, rather than rising up in a more traditional wedge-shape. The idea is to show off how roomy the car is, rather than trying to make it look like a coupe. That’s a refreshing attitude, to be fair.

Inside, as if that monster 48-inch screen wasn’t enough, there are actually extra touchscreens. One, a seven-inch unit, is mounted in the middle of the steering wheel, and it’s the driver’s main control centre. It’s mounted above the airbag, and has been made with shatter-proof glass (as is the big display) to prevent injury in the event of an accident.

The passenger also gets their own eight-inch screen, which gives them control over the big screen, and the climate control on their side of the car. The seats are designed to rotate inwards slightly when the car is under autonomous control, making it easier for the driver and passenger to chat. Gesture, voice, and multi-touch controls will make it, theoretically, easier to navigate through the functions of all these screens, and Byton says that its technology will even be able to read a driver’s expressions and mood. To what end, we’re not quite sure…

"As one of the most important motor shows in the world, Frankfurt is a yardstick for us” said Dr. Daniel Kirchert, Bytons chief executive officer. “We are on the verge of starting series production and the feedback from media and especially from our future customers, is of great relevance to us. Today's unveiling of the Byton M-Byte also shows the effort paying off for the team, which has worked relentlessly on the car for over two years. Within that short amount of time, together we have taken a smart electric car from an initial idea on a white sheet of paper to series production readiness, while also building a coherent infrastructure with locations on three continents and an efficient ‘Industry 4.0’ production facility in China. We can rightfully be proud of this.”

And the Irish connection? Byton’s chief engineer is David Twohig, a native of Cork, who left his position with Renault-Nissan (previous work; the Zoe, the Qahsqai, and the Alpine 110 sports car) to move to Byton. “I think that Byton is focusing on what would be in the old marketing speak a ‘genuine un-met need.’ A genuine human requirement” Twohig told The Irish Times. “Because car guys, like myself, we love cars and we’ve created these beautiful things, which are a symbol of human freedom, but we’ve created a problem. We’ve created an environmental problem, about which many people can speak more eloquently than I, but we’ve also created a problem of serious congestion in the major cities of the world. That’s true in Paris, in Dublin, in London, in the massive urban centres in Asia. So people are spending hours of their day stuck in traffic jams, and we’re guilty of that. It’s partly the car industry’s fault, and Byton is genuinely thinking about how we can give that time back to the driver, and the passengers, and the user of the car. Make it so that time in the car can be genuinely used. That’s an interesting challenge, and we’re thinking deeply about it.”

The M-Byte will be sold in two versions — a basic model with a 272hp single electric motor, and around 360km range, and a twin-motor, four-wheel drive model with 408hp, and a claimed range of 435km. The basic car gets a 77kWh battery pack, the 4WD one comes with a 95kWh pack.

Byton claims to have some 50,000 reservations for the M-Byte from customers around the world, and is currently in the last stages of prototype testing. The car is expected to go on sale in China early next year, before coming to Europe in 2021, at an expected European price of around €45,000. There are no specific plans for Ireland, as yet, but hey — the chief engineer’s from Cork, so presumably we won’t be left out.