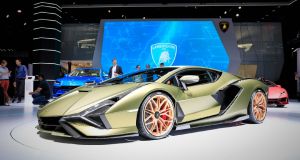 Just in case you were worrying that the climate crisis was going to mean us all giving up big, multi-cylinder engines, fret not! Lamborghini has brought its fastest-ever car, the Sián, to the Frankfurt motor show and guess what — it’s a hybrid.

Admittedly not much of a hybrid. From a system total 819hp output, the Sián’s dinky little electric motor contributes just 34hp, leaving 785hp to come from a roaring, bellowing, stomping 6.5-litre V12. As is only true to Lamborghini tradition.

There is some innovation amid the dinosaur’s call, though. Instead of conventional batteries, the Sián uses super-capacitors. These don’t hold a charge for as long as a normal battery, but they’re lighter, smaller, and faster to respond than a regular battery. In fact, Lamborghini claims that its super-capacitor is three times more powerful than a battery of the same weight and three times lighter than a battery producing the same power. The system is fully charged every time the car brakes (one of the efficiencies of the super-capacitor system) and the power is delivered as a sudden burst of extra grunt when you need it.

We’re not too sure about Lambo’s claims to have a ‘world’s first’ with this system though. Mazda did use something similar on a previous model of the 6 saloon (the i-ELOOP system) albeit not with quite so much power nor cylinders.

Performance is (pun incoming) electric — Lamborghini reckons that thee Sián will accelerate from 0-100km/h in just 2.8secs, and on to a top speed of more than 350km/h. That acceleration will be relentless, too. One of the tricks up the sleeve of the hybrid system is that it can add torque to the wheels when the engine is pausing in the middle of a gearchange, so the power delivery is essentially seamless.

While the engine and basic structure of the Sián is basically that of the Aventador, the body is all-new, with obvious allusions to recent Lambo concept cars such as the ‘Terzo Millennio.’ Lamborghini also admits that it has looked to the past for inspiration on this one, especially the Countach and Diablo, designed by one of the great Italian car stylists, Marcello Gandini. Look at the six individual rear lights, especially, for a Countach reference. The colour of the show car, incidentally, is called Oro Electrum (electric gold).

Only 63 Siáns will be built (to mark the fact that Lamborghini first started producing cars, as opposed to tractors, in 1963) and they’re all already sold out.

“The Sián is a masterpiece in possibilities,” said Stefano Domenicali, Automobili Lamborghini chairman and chief executive. “Not only does the Sián deliver a formidable hyper-car design and engineering tour de force today, it augments the potential for Lamborghini as a super sports car brand for tomorrow and for decades to come, even as hybridisation becomes more desirable and inevitably essential. The Lamborghini Sián represents the first step in Lamborghini’s route to electrification, and expedites our next-generation V12 engine. Its Sián moniker, meaning ‘flash or lightning’ in Bolognese dialect, denotes the first electrification of a Lamborghini production car and confirms our strong connection to the territory in which we operate. With the Sián, Lamborghini demonstrates its dynastic strength as a legendary super sports car brand for the future.”

Meanwhile, across the vast Volkswagen Group haul, the Sián has a distant cousin. The launch of Seat’s high-performance spinoff brand, Cupra, was generally met with a round of shrugs and a sense of ‘why?’ Why would you launch a supposedly separate brand, whose only model is a version of an existing Seat (the Ateca) with a silly badge that looks like a cheap tattoo?

Well, as of Frankfurt, the identity of the Cupra brand comes at least a little more into focus, with the reveal of this — the Tavascan concept.

Built on the VW Group’s MEB all-electric car platform, the Tavascan is a tightly-surfaced, low-slung sports SUV that boasts performance almost as impressive as its styling. Cupra reckons that the Tavascan can hit 100km/h from rest in just 6.5secs, and its 77kWh battery pack should be good for a WLTP-certified one-charge range of 450km. Twin electric motors, one on the front axle, one on the rear, generate a combined 306hp.

The name, incidentally, comes from a village in the Pyrenees mountains, which Cupra says: “Is unique due to its stunning landscape and surrounding nature.”

“Besides the Cupra Formentor, which will be launched in 2020 alongside two other high-performance plug-in hybrid models, we have already proved our technological capabilities by developing the world’s first 100 per cent electric touring car, the Cupra e-Racer. With the presentation of the all-electric Cupra Tavascan concept, we are translating this vision into the streets and proving that performance can be electrified”, said Cupra chief executive Wayne Griffiths.

The exterior styling is pretty exciting, from the backlit-badges front and rear, to the huge vents cut into the bumper and the front fascia (which Cupra claims are fully functional, either smoothing out airflow, or providing cooling for the battery pack), and — something we haven’t seen since the old Mitsubishi Evo FQ400 — a series of vortex-generating blades across the top of the rear window. And is it just us, or is there a very Lamborghini-esque aesthetic to the Tasvascan? Something about its sharp-edges and low-clung glasshouse that puts us in mind of Lambo’s own SUV, the Urus.

Inside, the cabin is very minimalist, with a 12.3-inch digital instrument display, a flat-bottom multi-function steering wheel, and a 13-inch infotainment screen, which can be swivelled fully away from the driver to face the front-seat passenger, allowing them to watch a movie on the move (cinema on the commute?).

Elsewhere, the cabin is full of carbon-fibre and Alcantara detailing, while each seat gets its own built-in speaker and microphone to access the infotainment system.