IBM claims car brands will not matter by 2030

Digital experience will drive car sales and use in a decade, tech giant says 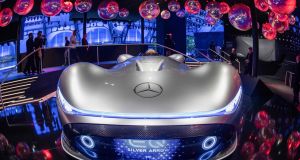 A futuristic concept car from Mercedes, on display at the Frankfurt auto show.

In a decade’s time, you will no longer care about what brand of car you sit into in the morning, but you will care about that vehicle’s safety credentials, and how well it integrates into your digital lifestyle. That is the claim of IBM, in its Racing Towards a Digital Future report on how it sees the motor industry adapting to technological advances by 2030.

IBM’s prediction isn’t that brands won’t matter at all in the motoring sphere by then – but that specifically within the autonomous car and ride-hailing market, brand appeal will become less and less significant. According to the report, 48 per cent of consumers say the vehicle brand wouldn’t matter to them in an autonomous, mobility-as-a-service paradigm, but cost and convenience would. The IT giant expects that, by 2030, some 15 per cent of new cars could be fully autonomous, and that car-sharing will account for 26 per cent of global annual mileage.

The survey, carried out by the IBM Institute for Business Value conducted the Automotive 2030 Consumer Survey with 11,566 consumer respondents, as well as the Automotive 2030 Executive Survey with 1,500 automotive executive respondents. Those motor industry executives are also currently fearing something of a digital Armageddon, with 50 per cent of them saying that they need to reinvent their organisations with digital technologies, and do so urgently.

IBM says that in this future motoring world, attributes such as “handling,” “horsepower,” or “styling” will become less important, and that other aspects will come to define how a customer sees a particular brand or service, such as “connected”, “personalised” or “seamless”.