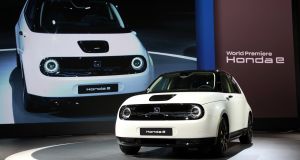 The new Honda e: arriving in Ireland in 2021 with a range of 200km on a single charge and a price tag we can guess will start close to €30,000 depending on grants

Honda has announced prices for the Pikachu-like Honda e at Frankfurt, staring €29,470 in Germany. That means it might just sneak under the €30,000 barrier here after grants, but we won’t know for a bit yet – Honda Ireland confirmed to The Irish Times that the e won’t arrive here until 2021.