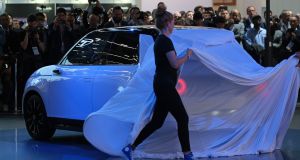 Once upon a time in Frankfurt, the motor show was huge; commercially, culturally, and especially physically. Some of the bigness has left the show this year. Certainly the crowds are down and the stands are noticeably smaller.

While Mercedes and the VW Group still have massive halls all to themselves, the spaces don’t seem as vast as once they did. BMW’s stand is relatively small, compared to long, long, ago when they took a whole hall about the size of the Aviva to themselves and even had a “rolling road” inside, where the latest models drove around a mock road at mezzanine level. Today big name brands such as Toyota, Peugeot and Citroen, Volvo, Nissan, Fiat, Alfa Romeo, have optd out of this show and gone to a land far away (Geneva 2020 to be exact).

For all that though, there seems to be something amid the displays and the shiny metal. Is it optimism?

It might just be. Just before the show opened, BMW — a brand that has in recent times had to reduce and retrench to cope with sales headwinds — predicted that sales would not only shortly recover, but that new factories would actually have to be built to build the necessary cars.

Ford, too, seems more bullish (something that will be of cold comfort to its Irish employees, who are still staring down the barrel of job losses). With its (costly) European restructuring well under way, Ford is predicting it will sell one million electric, plugin-hybrid, hybrid, and mild-hybrid cars in the next three years in this side of the Atlantic.

Mercedes-Benz, another brand which has had to pull its financial horns in of late, also came out swinging at Frankfurt. The debut of its EQS concept has been, arguably, a little more low-key than might reasonably have been expected, but it is still a truly striking car, and hopefully will translate through to production relatively unchanged. For now, it’s not a replacement for the mighty S-Class, but an adjunct, but one day it or its successor will be the true king of the Mercedes range, and on today’s 700-km-ranged evidence, that’s fine by us.

But all the talk on the show floor is of the BMW 4 Series Concept. The ‘beaver-teeth’ grille of this concept, and the fact that it looks rather more like an Infiniti than a BMW around the sides and back, are troubling many.

As an almost-footnote on the BMW stand, though, was a hydrogen powered X5 prototype. Hydrogen has generally taken a back seat to batteries in recent years, but this car, produced in co-operation with Toyota, shows that there’s still potential in filling up with star fuel.

The two big reveals of the day thus far couldn’t be more different. Land Rover’s new Defender is a replacement for a car that started production in 1948, and finished in 2016. That means the new car has an almost impossible level of expectation up to which it must live, but I reckon Land Rover has done a good job here. The styling is a little snub-nosed, but the line around the rear lights and wheelarch, which almost perfectly replicates the shape of the old Defender’s rear end, within the modern frame of the rest of the car, is delightful. The optional flip-up front centre jump seat is also a lovely touch, and while launching the Defender with diesel engines might seem a bit old-school, a mild-hybrid is coming soon, a plugin-hybrid beyond that, and a fully electric version beyond that. If Land Rover has, at long last, got its reliability sums right, then this could well be a a much-needed runaway success for the troubled firm.

VW’s ID3 is a launch from a company clearly untroubled by much. Born out of the angst of the diesel emissions scandal, the ID3 has now been repurposed as the spiritual successor to the original Beetle and Golf — it’s meant to be the people’s electric car, with neat, appealing styling, a minimalist, but classy cabin, long range performance, and a price starting at less than €30,000 (grants inclusive) when the full range arrives here in 2021. Until then, a pricier, sub-€40,000 model will be available for well-heeled early adopters. Is it the new Golf? Possibly, although the actual new Golf is coming early next year, so let’s wait and see, eh?

Also trying to mix electric power with retro vibes was Hyundai, whose 45 concept — an all-electric, autonomous hatchback — has seventies styling inspired by the original fastback Hyundai Pony. It looked more striking in the early photos, to be honest, but Hyundai says it will influence its future styling, and with those Giugiaro-esque lines, that can only be a good thing. Of rather more immediate import on the Hyundai stand was the handsome new i10 city car, which arrives soon. It looks smart, if recent Hyundais are anything to go by it should drive well, and the only shame is that Ireland is unlikely to get the sporty N-Line version. Boo.

Audi’s far-out AI-Trail concept — a mix of Mad Max and iPad — was a striking addition, but the plugin-hybrid A7 Sportback, with 367hp and emissions of just of just 48g/km, comes dangerously close to taking the title of ‘Car The Judges Would Most Like To Drive Home From The Show.’

Elsewhere, Honda confirmed that its Pokemon-styled ‘e’ electric city car will start at a price tag of just under €30,000 in Europe (which means that it might just sneak under the €30,000 barrier here too, once rebates and grants are applied) and that the next Jazz hatchback will be sold only as a hybrid in Europe, using a similar gearbox-less hybrid setup to that of the larger CR-V.

As well as the EQS, Mercedes showed off the new diesel plugin-hybrid GLE 350de, which can go for a claimed 100km(!) on one charge of its batteries, and which — obviously — has diesel economy on its side on longer journeys. Actually, in spite of general electric fever, Mercedes was being ever-more bullish on diesel power, saying that it still has a significant role to play, and that the company has actually seen diesel sales creeping up again a little. That won’t please the environmental protesters picketing the doors of the Frankfurt show, but it does seem to be rather a perfect encapsulation of the 2019 event — look forwards, plus a little bit backwards, and cling as tight as you can to the glimmer of optimism that’s in the air.