New all-electric hatchback will go on sale in Ireland next year from under €30,000 after grants 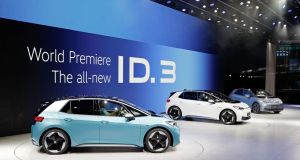 Volkswagen’s new beginnings, offering a cleaner, conscientious, empathetic and caring brand, got off to a shaky start on Monday night. The event was meant to herald in a new era for the car giant, complete with new VW logo. But not all the choreography went to plan when the grand curtains that cloaked the show stand failed to drop on cue.

So, as an increasingly tetchy marketing boss, Jochen Sengpiehl, outlined how the new brand was embracing its more sensitive and humourous side, the Cherry pickers were wheeling in to try and release the curtains and reveal the new look car brand, post-diesel scandal - and post Ferdinand Piech, the autocratic former boss whose sudden death a few weeks ago reminded people of the tough journey VW and its sister brands have taken to become the global giant they are now.

But while everything may not have gone like clockwork on stage, the event itself did herald something historic: the launch of the Volkswagen ID.3 billed as the third-most important car in the history of the company, following on from the original Beetle and the first-generation Golf.

It’s too early to say for definite, but in terms of the VW brand it’s a big news event, a major turning point for a company that grew from the literal ashes of war to dominate the global car industry.

It is also, of course, a massive multi-billion-euro mea culpa for the diesel scandal, the terrible admission that VW was forced to admit; that it had sold the world a pup when it came to how clean its diesel engines were, and that they were in fact pumping out vast amounts of potentially lethal gases.

In fact, VW’s emissions have done more to propel the world towards electric power for cars than anything short of legislation and certainly more than all the hype around the likes of Tesla.

The ID.3 is a family-sized hatchback, with a conspicuously spacious interior, and a one-charge range of up to 550km. That is a truly impressive range, but it will be available only if you buy the most expensive version of the ID.3, the one with a 77kWh battery. The mid-spec version uses a 58kWh battery, and can go for around 420km on a charge, which is similar to rivals such as the Kia eNiro and Nissan Leaf, but with a slightly smaller battery, underscoring the efficiencies of VW’s new MEB electric car platform. A basic model, which will be priced at less than €30,000 in Ireland after grants, will have a 45kWh battery and a still-reasonable range of 330km. Supply will be very limited in 2020, though. For many Irish buyers, this is likely to be a 2021 model, really.

By that time electric car owners can expect to be paying to charge their vehicles at public charging points. However, VW is believed to be in negotiations with a leading electricity supplier to provide a year's free public charging to new ID.3 buyers.

The ID3 has been designed around fast-charging, and assuming you can find a charging point capable of outputting 100kW at a time, you can charge your ID3 for up to 290km of range in 30-minutes. Sadly for Irish customers, the majority of our fast-charging network (when it works at all) is limited to 50kW for the moment.

The electric motor outputs 204hp, and has 310Nm of torque. The only performance figure that VW is quoting so far is the top speed; 160km/h.

According to VW’s head of sales and marketing, Jurgen Stackmann, the ID3 is already a major success. Although VW had previously only shown the car in striking rainbow camouflage, it has garnered something like 30,000 pre-sales from customers across Europe. “This is a huge success – and shows that the ID.3 is coming at the right time. Most pre-bookers come from Germany, Norway, the Netherlands, Sweden and Great Britain” said Stackmann. That’s 30,000 orders for a car that won’t actually start to filter onto dealer forecourts until next year. Irish buyers have also been signing up for the new car, though a spokesman refused to reveal how many Irish buyers have signed up, apart from saying the Irish order book was “healthy”.

The ID3 will have to sustain that success, though, if it is to repay the many billions of euro VW has sunk into its development. The MEB platform that underpins it will spread out to several other VW models, from SUVs to a luxury saloon to a wild beach-buggy recreation. VW has also offered the MEB platform under licence to other car makers, and Ford is expected to take up that offer. The next-generation Focus could, potentially, be based around the MEB.

Not surprisingly, VW is using the ID.3’s launch to push back against doubts expressed in recent months over just how clean electric cars really are. “With a share of 14 percent of all global greenhouse gas emissions, the transport sector is particularly in question here – and with it the automotive industry.”

Speaking on the night, Dr Herbert Deiss, VW Group chairman said currently the VW group of brands make up one per cent of the global greenhouse gas emissions. Dr Deiss said that this will change, step by step. For a start, by 2028 the group will have launched nearly 70 new electric vehicles. “This corresponds to a volume of 22 million electric vehicles based on our electric platform - spread over all brands.” He said that within 10 years nearly every second group vehicle in Europe and China will be electric.

However, he said that vehicles must be charged by green electricity to make a real difference in terms of overall CO2 emissions. “We must stop producing energy using coal as quickly as possible. That is the only way that electric mobility can make sense.”

As to the ID.3, the cabin is strikingly minimal — a big central display, a smaller digital instrument pack behind the wheel, and that’s it. The Tesla-style all-screen dash has come to the mainstream market. The gear selector is, BMW i3-style, up on the side of the instrument panel, freeing up storage space in the centre console. Only the electric windows and hazard warning lights are still operated using tactile switches, and VW expects users to make broad use of the car’s voice control systems.

The fact that the battery pack is under the floor, and that the single electric motor is under the boot (yes, the ID is, Beetle-style, both rear-engined and rear-wheel drive!) means that the cabin is hugely spacious. VW claims Passat-style interior space in a Golf-sized package.

As well as this striking new electric car, VW has also revealed a new logo, with which to help market itself. Don’t worry — it’s still basically the same superimposed V and W in a circle (no return to the original Wolfsburg city crest badge, sadly) but it does away with the 3D-style blue-and-chrome badge used recently. Instead, it’s a slimmed-down, flattened badge, much more in keeping with the original logo from the 1950s.

That’s a costly exercise at a time when there are multiple draws on a car company’s cashflow, not least the development of new electric and autonomous systems. For all the flowery words about embracing responsiblity and becoming more vibrant, it’s the cars that will matter more, not the multimillion euro logo tweak to the signage over the showroom.