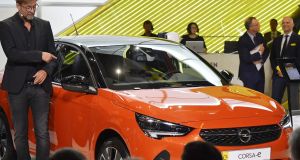 Electric and part-electric power is clearly high in the minds over at Opel, where the German brand (whose headquarters is just down the road from Frankfurt at Russelsheim) is pushing both the new electric Corsa, and a plugin-hybrid version of the Grandland X crossover.

The Corsa-e is getting a publicity push from a rally car version, which Opel claims is the first electric rally car to be eligible for European championship events. it uses the same 134hp electric motor as the road-going Corsa-e, and will take part in its own Opel-backed electric rallying championship next year.

The Grandland X Hybrid4 is, unsurprisingly, a sister car to the recently announced Peugeot 3008 Hybrid4, and uses the same combination of 200hp 1.6-litre turbo petrol engine, with two 109hp electric motors, for a total output of 300hp. It’ll go for as much as 59km on a full charge of the batteries, with fuel economy a claimed (slightly laughable) 1.4-litres per 100km (201mpg). The 29g/km Co2 figure is deadly serious, though, and the Grandland and Corsa are part of what Opel says will be an ‘e-offensive’ in the coming years.

“At Frankfurt, we at Opel will be showing how the future of the automobile will become reality”, said Opel’s chief executive, Michael Lohscheller. “We focus on the customer and their needs. Instead of prescribing the way forward, we offer the entire drive portfolio – from ground-breaking electric and hybrid drive to efficient combustion engines. All new models are equipped with state-of-the-art technologies and already available to order.”

Audi’s AI-Trail quattro joins the German car maker’s three other autonomous car designs, but it’s the one designed for off-roading and rugged, robotic adventures into the presumably barren wastelands of the future. It looks like a Mad Max film set refugee that somehow got mixed with an iPhone.

Audi describes it as an off-road experience vehicle, a monobox shape with huge wheels and tyres pushed out to the corners. It looks huge, but it’s actually smaller than an Audi Q3 SUV. Those wheels are 22-inches in diameter, with massive 33-inch tyres, and with the 60mm-travel suspension they grant the AI-Trail a ground clearance of 34cm.

The wild design goes a bit further than you might expect, though. Yes, it’s a futuristic one-box design, and yes it has the de rigeur rear-hinged doors that you might expect. But what about the headlights? Instead of conventional headlights, the AI-Trail is equipped with five rotorless drones — yes really — that can fly around and ahead of the car, illuminating the surrounding terrain. They sit in a rack on the roof, so that they can be a light source when the car is parked up in a campsite, and of course the drones also have cameras, so you can theoretically use them to view potential hazards up ahead.

Audi is extending this all-round vision concept into the AI-Trail’s interior, which is said to be based on helicopter designs. There is no instrument panel. Instead, you simply plug in your mobile phone to a slot on the steering column, and that then becomes your instruments. This lack of an instrument pack, says Audi, means it can lower the beltline of the car, to really improve the view out.

As with the other AI cars, the Trail is designed to be autonomous and self-driving on road, but it does have a steering wheel and pedals, so that the driver can take over when heading out into the bush. It’s designed to be a slower car than the AI-Con luxury saloon, because the idea is to preserve battery life for heading off on long off-road treks, and of course because off-roading is a discipline best tried slowly. Audi reckons on a 400-500km range for the battery on one charge.

Each wheel gets its own electric motor, for maximum possible flexibility and control when off-roading, and the total system output is 435hp, with a massive 1,000Nm of torque.

And in a (possible) tribute to the Citroen 2CV, the AI-Trails rear seats are actally fabric hammocks strung on a tubular frame, and they can be (just as with the old Citroen) removed and used as outdoor seating for picnics.