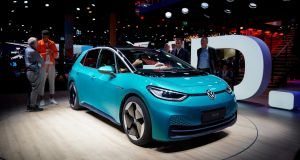 Once upon a time in Frankfurt, the motor show was huge; commercially, culturally, and especially physically. Some of that scale has left the show this year. Certainly the crowds are down and the stands are noticeably smaller.

Frankfurt has always been fond of a touch of motoring fantasy, but reality is starting to bite.

That said, if you were to judge by the press day of the opening day of the world’s biggest auto show, in Frankfurt, we are already in the age of electric. And on the cusp of an era of autonomous self-driving cars. It’s a world apart from the reality on most motor dealer forecourts.

To the backdrop of trade wars, threats of tariffs and the imminent impact of Brexit, a little bit of escapism is allowed. After all, having forked out billions on a punt as to what will power future cars, and whether tech giants like Google will try and gobble up their lunch, the car executives need to be able to daydream a little. And that’s where the futuristic concepts at Frankfurt come into play.

Perhaps a psychology student would also point to the strong retro theme that dominates this year’s concept and production models. Perhaps the current car giants are taking comfort in harking back to more halcyon days when stability was the order of the day.

For all the upheaval under way at present, there was also some optimism in the air. Just before the show opened, BMW – a brand that has in recent times had to reduce and retrench to cope with sales headwinds – predicted that sales would not only shortly recover, but that new factories would actually have to be built to build the necessary cars.

Ford, too, seems more bullish. With its European restructuring well under way, Ford is predicting it will sell one million electric, plugin-hybrid, hybrid, and mild-hybrid cars in the next three years on this side of the Atlantic.

Mercedes-Benz, another brand which has had to pull its financial horns in of late, also came out swinging at Frankfurt. The debut of its EQS concept has been, arguably, a little more low-key than might reasonably have been expected, but it is still a truly striking car, and hopefully will translate through to production relatively unchanged. For now, it’s not a replacement for the mighty S-Class, but an adjunct, but one day it or its successor will be the true king of the Mercedes range, and on today’s 700km-ranged evidence, that’s fine by us.

The two big reveals of the show couldn’t be more different. Land Rover’s new Defender is a replacement for a car that started production in 1948, and finished in 2016. The styling is part modern, part homage to its past. And it works a treat.

The optional flip-up front centre jump seat is also a lovely touch, and while launching the Defender with diesel engines might seem a bit old school, a mild-hybrid is coming soon, a plugin-hybrid beyond that, and a fully electric version beyond that. If Land Rover has, at long last, got its reliability sums right, then this could well be a a much-needed success for the troubled company.

VW’s ID3 is a launch from a company clearly untroubled by much. Born out of the angst of the diesel emissions scandal, the ID3 has now been repurposed as the spiritual successor to the original Beetle and Golf – it’s meant to be the people’s electric car, with neat, appealing styling, a minimalist, but classy cabin, long-range performance, and a price starting at less than €30,000 (grants inclusive) when the full range arrives here in 2021. Until then, a pricier, sub-€40,000 model will be available for well-heeled early adopters. Is it the new Golf? Possibly, although the actual new Golf is coming early next year, so let’s wait and see.

Also trying to mix electric power with retro vibes was Hyundai, whose 45 concept – an all-electric, autonomous hatchback – has 1970s styling inspired by the original fastback Hyundai Pony. Of rather more immediate import on the Hyundai stand was the handsome new i10 city car, which arrives soon. It looks smart, if recent Hyundais are anything to go by it should drive well also.

Elsewhere, Honda confirmed that its Pokemon-styled “e” electric city car will start at a price tag of just under €30,000 in Europe (which means that it might just sneak under the €30,000 barrier here too, once rebates and grants are applied).

In spite of general electric fever, Mercedes was being ever-more bullish on diesel power, saying that it still has a significant role to play, and that the company has actually seen diesel sales creeping up again a little. That won’t please the environmental protesters picketing the doors of the Frankfurt show, but it does seem to be rather a perfect encapsulation of the 2019 event – look forwards, plus a little bit backwards, and cling as tight as you can to the glimmer of optimism that’s in the air.

So to the car of the show and strangely it’s nothing sleek or electric: it’s a concept car that left everyone slack jawed. BMW’s buck-toothed coupe concept it supposedly softening us up for the premium car giant’s new design language. It was by far the most discussed, debated and berated car at the show. There are certain parts we like about the car, certain parts we don’t, and a front nose that will be the face of protagonists in several nightmares.

Finally, getting back to the future, and it seems that for all the glitz and glamour of the Frankfurt show, one of the fundamentals of self-driving cars can trace its developments to Tuam, Co Galway.

Connaught Electronics Ltd (CEL) started out as a manufacturer of automotive security products, before diversifying into camera systems. By 2007 it was starting to become clear how critical camera technology was going to be in the future automotive world. Not only would they provide information for parking systems, but ultimately these cameras are going to be the eyes for autonomous driving.

Today, as part of auto parts giant Valeo, the Co Galway operation oversees the group’s camera technology development, supplying to all the major global brands. As Mark Vrecko, president of the comfort and driving assistance at Valeo explained to The Irish Times: “the global operation of [Valeo’s camera] business is now based in Ireland, with the technological development being done in Ireland. We have in excess of 1,000 people working in the Co Galway plant and it is the centre of our worldwide activity on camera technology. And that worldwide activity is now producing 12 million cameras for our customers per year. In the next five to six years we will double this number.”

So at least some of the upheaval under way in the automotive world is being driven by technology tried and tested on west of Ireland roads.