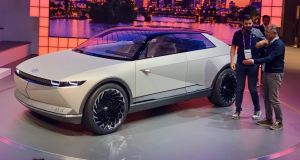 Hyundai had an early oar in for car of the Frankfurt motor show when it revealed the first, shadowy image of its 45 concept. Said to be inspired by the original Hyundai Pony Coupe Concept of 1974, it looked as if it was going to be an homage to those glorious ‘folded paper’ concepts for the 1970s that flowed from the pencils fo Gandini and Giugiaro.

The reality? Well, it does look cool from the back (with that full-width, animated, LED brake light) but from the front it’s a touch more bland. Still, good to see some 45-degree angles on a modern car design.

Hopefully, the 45’s stylistic demeanour will filter through to production models too. Hyundai sys that the 45: “Foreshadows a new era of Hyundai’s automotive design focused on electrification, autonomous technologies and intelligent design.” Well, if this is what thew next i30 is going to look like, count me in.

Hyundai’s stylists say that those 45-degree lines form a diamond silhouette, and that the overall look of the car reflects — wait for it — ‘Sensuous Sportiness.’ I do like a bit of sporty sensousness, I don’t know about you.

At the front, there are new so-called ‘Kinetic Cube Lamps’ for headlights, which basically use multiple, mobile, LED bulbs, but with a look that is meant to evoke the simpler headlight designs of the seventies.

Down the side, there’s a big strip of LED lights which is actually a battery level, so that the 45’s putative driver (and everyone else walking past, we guess) can tell as they walk up to the car how much juice is left in its battery pack.

There’s also an all-round camera view system, which Hyundai says has been designed to allow future autonomous applications, and all the lenses get a neat little rotating system, with brushes, to keep them free of dirt and road grime.

Inside, the designers have tried to create a ‘living space’ rather than a traditional cockpit. We think that means they’ve used light colours, pale wood, and binned most of the dashboard, replacing it with a gigantic touchscreen. The fact that the batteries are mounted under the floor allows the cabin to be broad and long, and there are big door pockets that can hold a tablet or, rather quaintly according to Hyundai, a large book. The seats can swivel around to face each other when the autonomous systems are switched on.

Hyundai isn’t giving any predicted performance figures for the 45, so really it’s just  a style concept, but if some of its seventies lounge lizard looks can rub off on future models, that would be fine by us.

While Hyundai is looking to the distant future, Ford is looking at a rather more imminent date — 2022. By that time, the Blue Oval wants to have sold one million electric or at least partially battery vehicles. In fact, by that date, it wants more than 50 per cent of its sales to be batteries-included.

“With electrification fast becoming the mainstream, we are substantially increasing the number of electrified models and powertrain options for our customers to choose from to suit their needs,” said Stuart Rowley, president, Ford of Europe. “By making it easier than ever to seamlessly shift into an electrified vehicle, we expect the majority of our passenger vehicle sales to be electrified by the end of 2022.”

At Frankfurt, Ford is showing off its new hybrid lineup, which includes the new Kuga small crossover (which comes with a mild-hybrid version of the 1.0-litre EcoBoost turbo engine); the new Kuga — which will be coming to these shores by the end of this year — which is, uniquely, available as a full, Toyota-style hybrid, a mild-hybrid, and a plugin-hybrid; the eight-seater Tourneo version of the Transit van, which will now come with a plugin hybrid option; and the new Explorer hybrid, a big, US-made 4x4 which, rather sadly, probably won’t be coming to these shores.

As for actual new models? Well, the Kuga and Puma are new, but we have seen them before. Other than that, the Ford stand is rather bereft of newness. There is word of the upcoming Mustang-inspired all-electric SUV, for which Ford is promising a 600km one-charge range, but that won’t be physically shown until the Los Angeles motor show later this year. There’s also much talk of new mobile phone apps, the tie-up with Centrica (Bord Gais) to supply home and public charging options, and a ‘Go Electric’ experience, which will tour Europe to try and rev the Ford-buying public up about electric options. Beyond that, though, the Ford stand is looking a little bereft.