Frankfurt this year will see several (literally) electric debuts, a new Land Rover Defender, and the fastest Lambo ever built 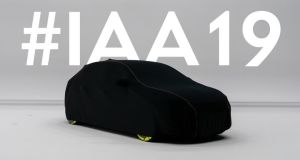 Frankfurt is a big motor show. Huge in fact, and we mean physically (we recommend good sneakers, maybe even rollerblades, for getting around). But also culturally.

It’s not the neutral ground of Geneva, the other big European auto show. Instead this is where the big German brands go to war with one another, fighting over who’s got the most exciting new model debut, or the biggest stand. If there’s going to be a show-stopper at Frankfurt, it’s most likely to come from Mercedes, BMW, Audi, Volkswagen, Porsche, Audi, or Opel.

Unless it’s not. Interlopers will, this year, be making some major heaves at Frankfurt, including Land Rover, Hyundai (which, in fairness, has its European HQ in Frankfurt), and Cupra (Seat’s high performance brand). Who will reign supreme in the city where Germany once crowned its Emperor, and created its greatest sausage?

Who’s bringing what to Frankfurt?

Not surprisingly, Audi will be bringing a lot of metal to Frankfurt - the new 600-odd-horsepower RS6 estate, the RS7 four-door coupe, the Q3 Sportback SUV-Coupe, an update for the A5 coupe (including a new diesel S5), and the odd ‘Citycarver’ A1 that tries to be an SUV (cough-Rover Streetwise-cough). On the concept car front, there will also be the AI:Trail, an electric, autonomous, off-roader, and Audi’s Formula-E electric racer.

Audi’s fellow Bavarian brand will show off its updated X1 SUV, and a concept version of the next-generation 4 Series Coupe, plus the dramatic half-electric M-Next Vision mid-engined concept. There might just be an appearance of the new 2 Series Gran Coupe, a sleek four-door version of the new front-wheel drive 1 Series. The new M3 might also be on the stand, and the X6 (in a none-more-black ‘Vantablack’ edition) definitely will be.

Ford was absent from the Geneva motor show earlier this year, but it’s coming to Frankfurt and it’s bringing the new Puma small crossover (controversial naming choice, but it is oddly appealing) in both Titanium-X and ST-Line forms, both with mild-hybrid power. The new Kuga, in diesel hybrid, petrol hybrid, and plugin hybrid forms, will also be there and we should get some sort of info (a concept too, maybe?) on where Ford’s going with its electric-and-SUV-heavy future, as well as its future relationship with Volkswagen in Europe.

Honda’s big noise at Frankfurt makes no noise at all - it’s the new Honda E electric car, much trailed by both a concept and a pre-production version, but appearing at Frankfurt in ready-to-wear form. It’ll come with a choice of 134hp or 152hp electric motors (driving the rear wheels) but a relatively short range of 220km. Honda reckons it’s an ideal car for aspirational urbanites, but will people be prepared to pay premium money for a short-range posh supermini?

Hyundai will be showing off its new i10 city car at the show, which looks dramatic from the front, and astonishingly quiet at the back. Still, it’s a step up from the current model and features a very classy interior. The Korean car maker will also have its ‘Project C’ version of the i30N hot hatch on the stand (same 275hp engine but lighter thanks to carbon components, and with a tuned chassis), and the intriguing 45 EV concept. This retro-seventies inspired car (Hyundai says much of its styling is inspired by the original Hyundai Pony) is said to be a look ahead at where the company’s design language is going to go. Which would be awesome. Hyundai’s electric racing car, designed for the EV touring car series, will also make a Frankfurt debut.

Lamborghini will attempt to stop the show with the dramatic Sian, which is its first hybrid, albeit a mild-hybrid. Fast-reacting super-capacitors back up a monstrous 6.5-litre V12, which makes more than 800hp and makes this the fastest production Lambo ever. Only 63 will be built, and they’re all already sold.

We’ve been talking about it for more than a decade, but at last the all-new Land Rover Defender is here. Well, in Frankfurt at any rate. It could hardly be a more critical vehicle for a brand being battered by sales headwinds right now. It’ll have the chassis from a Range Rover, but will target the likes of the Toyota Land Cruiser and VW Amarok, so it’ll have to be more reliable than anything Land Rover has ever built. Arriving in Ireland next Spring, there is no indication as to what sort of price tag will attach to the new Defender. The show car is apparently being driven to the stage from the middle of nowhere in Kazakhstan, so bring a dustpan and brush.

As with its national rivals, Mercedes will be pulling out all the stops at Frankfurt. Its new GLB small SUV makes a production-ready debut, in both standard and AMG forms. We might also get to see the new, slightly smaller, GLA, as Mercedes continues to ever-more finely slice each segment. Most importantly of all, we’ll be getting a lot of electric cars from Mercedes. The new van-based EQV MPV is already sales-ready, but much more significant will be the EQS - an S-Class sized fastback coupe, with all-electric power and - allegedly -a 700km one-charge range. It’s not only a preview of a luxury electric car from Mercedes, but a glimpse at both the styling and tech of where Mercedes is going in the next decade.

There might be (optional) Union Flags in its brake lights, but Mini is of course substantially a German brand these days. It’ll rock up to Frankfurt with the new Mini Cooper S E electric model (which goes on sale very shortly) and the super-hot 306hp, front-drive John Cooper Works GP. We might also get to see something of the top-secret Traveller all-electric MPV, or maybe the Rocketman electric city car.

With Citroen and Peugeot skipping Frankfurt, it’s up to PSA Group’s local operation (Opel’s HQ at Russelsheim is just down the road) to fly the flag at Frankfurt. Propping up the flagpole, then, will be an all-electric Corsa-e rally car, a plugin-hybrid version of the GrandlandX crossover, a facelift of the Astra hatchback and estate, and an all-electric concept crossover, which is most likely a preview of a future new Mokka, based on the Corsa-e.

Porsche’s all-electric Taycan, revealed just days before the show, will definitely be a big draw. With more than 700hp in Turbo S form, it’s searingly fast, impossibly low-slung, hugely spacious, and yet falls short of the rival Tesla Model-S when it comes to range (which Porsche says is down to ensuring battery reliability and safety). On a more traditional note, we should get to see more versions of the 992-era 911 including the Turbo and possibly the hardcore GT3, while there might be some news on the possibility of all-electric versions of the Boxster and Cayman.

Renault will have the new Captur (which goes on sale shortly) on its stand, and we should get to hear more details of that car’s plugin-hybrid version, as well as the conventional hybrid version of the handsome new Clio. There will also be a facelifted update of the large Koleos SUV to see, and an update of the Talisman saloon that, sadly, will still not be coming with right-hand drive.

Seat might be bringing its all-new Leon hatchback to Frankfurt, which would be a welcome sight as the current model is ageing fast. It may be that VW wants Seat to wait until the new Mk8 Golf has been launched, though. Seat will definitely have an interesting concept car on its stand though - the all-electric Tavascan SUV, from its sporty spin-off brand, Cupra. This has 300hp, 450km range, and looks like a more affordable Lamborghini Urus. Here’s hoping they actually put this one on sale. The plugin-hybrid Tarraco will also appear, and we might get to see an updated Ateca SUV too.

Skoda will be heavily promoting its new Kamiq small crossover at Frankfurt, including the new top-spec Monte Carlo model. There’s a faint chance we might also get to see the all-new Octavia, but that’s more likely to be held back for a few months yet. Definitely appearing, though, will be an all-electric version of the Mii city car, and a plugin-hybrid Superb saloon.

This is VW’s big moment. At Frankfurt, it will finally unveil, in production form, the new ID.3 all-electric hatchback, which promises big range (450km-plus) at a (relatively) affordable price. This is not just VW’s big mea culpa for its diesel scandal; this is arguably the third ‘big’ model in VW’s history, following on from the Beetle and the Golf.

It’s the reason that the debut of the new Mk8 Golf has been put back, in fact. Also on the stand will be an updated, electric, e-Up with longer range, and a classic Beetle with the batteries and electric motor from the e-Up installed which will actually be put on sale. There will also be the horror of the T-Roc convertible, but don’t worry - that one’s not coming to Ireland.

As with any major motor show at the moment, it’s almost as important to note who’s not going to attend as who is. Big names missing from Frankfurt 2019 will include Citroen, Peugeot, Nissan (despite revealing its new Juke crossover in recent days) and Toyota. Volvo will also be absent, although its high-performance electric brand Polestar will put in an appearance.