At under €8,000 in China the Renault Kwid could have a greater impact in reducing emissions thanks to potential volume sales 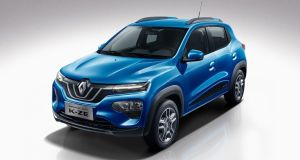 The ultra-budget City K-ZE has just been launched in China and it’s astonishing, even for a brand long known for its EV commitment

Renault might just have launched the most significant car in the modern world, but nobody noticed.

The ultra-budget City K-ZE has just been launched in China and it’s astonishing, even for a brand long known for its EV commitment.

While most EVs are aimed to pull city dwellers out of internal-combustion cars, the City K-ZE is based off lessons Renault learned making its ultra-budget Kwid.

In short, it’s designed to electrify a chunk of the car market that never before bought cars at all, cleaning up awful scooter and motorbike emissions in developing countries.

Its amazingly cheap entry price - it’s less than $8,700 (€7,879) in China and built by Renault and its Chinese joint-venture partner Dongfeng - means it could attract most of its buyers from people who’s only shopping options might have been dirty older cars or scooters.

It should sell in huge numbers, just like the Indian-built Kwid small car it’s based on, which means it will almost certainly have a far greater impact on the world’s automotive CO2 emissions than anything Tesla, Porsche or Jaguar will build. Or all of them put together.

It will use a Tianjin Lishen lithium-ion battery, built in China, with 30kWh of energy capacity, which Renault says is enough for 250km of NEDC-rated driving range between charges. That will probably circle down to towards the 180-200km area on the tougher new WLTP cycle, but it’s still impressive for the money.

It’s not stopping at budget cars for developing markets, either, with a pure BEV version of the small Twingo under development for a 2021 debut.

It has also been a major EV player for two decades and is the biggest EV seller in Europe. Its current EV range includes the Zoe, the Twizy, the Kangoo and the RSM SM3 ZE sedan in South Korea and the Master ZE.

It plans to have eight pure EVs and 12 hybrids on the market by 2022, and there’s a stronger 80kW electric motor on the way for the Zoe.

Its Alliance partners, Nissan, famously offer the Leaf as well (plus the Scoot and e-NV200), while the other Alliance brand, Mitsubishi, is strong on plug-in hybrids.

The car industry has been split on the importance of range and, as fast-charging networks become easier to find, when to fit cars with the range and battery packs that best suit their target buyers.

The Kwiddish City K-ZE is the first example of a western OEM biting the bullet and making a statement that price is more important than range.

The other side of the argument is that there isn’t going to be much of an overall environmental benefit if the only EV users are at the Porsche/Tesla/Audi/Jaguar/Mercedes-Benz end of the car market and not the higher volumes at the cheaper end.

It’s not the first time Renault has done this, with its groundbreaking Kwid, which sold for $4,000, instrumental in bringing small, cleaner cars on to the road. Though its crash safety was appalling by western standards, it was a whole lot safer than the scooters most of its buyers were riding before they climbed into their Kwids.

The K-ZE will make it to India within three years, mainly because the country’s charging infrastructure is virtually non-existent.