Frankfurt motor show: Buck-toothed BMW is not a joke, they're serious 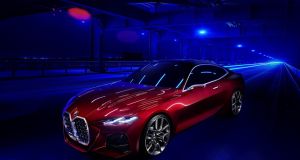 A radical new look for the next 4 Series coupe could be on its way after BMW pulled the covers off its Concept 4 at the Frankfurt motor show on Tuesday.

The Concept 4 has been clearly conceived to accustom people up to the iNext’s controversial buck-toothed grille, but while the body styling is sleek and refined, the front nose is the scariest thing we’ve seen in years. And that’s probably the whole idea.

The only reason BMW has shown the polarizing all-new Concept 4 car at the Frankfurt show is that it’s buttering us up for a production car that has very similar features.

And there’s good and bad in that.

The upside is that from some angles, it looks like some of the gloves have finally been taken off the designers’ hands at BMW, but only to a point.

That point is not at the clearly controversial “beaver-style” take on the brand’s traditional twin kidney grilles that BMW debuted with the iNext concept car.

It actually begins further along the body than that, with an almost unprecedented number of bonnet creases (at least eight) that even Audi hasn’t been brave enough to take on.

It is clearly a successor to the 4 Series coupe, with its sleek, elongated roofline and short rear overhangs, but the front-end treatment and the (in)creasingly complicated bonnet suggest something else is going on inside the minds of the BMW board.

It moves the 4 Series away from its smooth sides and into the Audi Sport world of fat, creased arches over both ends, but particularly the rear, where it now has the same kind of crouching-cat haunches as the RS 5.

“The kidney grille has always been a signature feature of BMW cars,” BMW design head Domagoj Dukec said. “The BMW Concept 4 presents a confident and classy take on this iconic feature. At the same time, the BMW Concept 4 offers a look ahead to the expressive face of the 4 Series range.”

The proportions of the grille fit well enough in width, but not necessarily height, though BMW insists it harks back to the 328 or the 3.0 CSi classics.

BMW has tried to draw the focus from the grille’s overall shape and on to its details, which include horizontal trim elements (BMW grilles are normally vertical), with a highly intricate series of “4” numbers joined together.

While the grille is deep, the headlights are the slimmest in BMW history and their relationship with the folded-over bonnet look surprisingly similar to Jaguar’s design ideas for the XE and XF models.

The three-dimensional sculptures in the LED lights with no traditional glass covering, showing up the shapes to the world.

But there’s nothing wrong with the Concept 4’s proportions, with an elongated bonnet, an elegant roofline and a short bootlid.

The rear end is detailed by a deep air diffuser, while the bootlid seems concertinaed with a deep groove between the top of the lid and the boot opening.

It’s less discretely muscular and more chiseled than most traditional BMWs, even the concept cars, and that might be a strong hint about where BMW’s design future lies under new chief executive Oliver Zipse.

The paint, dubbed Forbidden Red, is trimmed with brushed aluminium and chrome, while it rides on 21-inch alloy rims with deep dishes.

Still got chickpeas to use up? Try this crowdpleaser
10