Driving the Peugeot 504 – a perfect car for troubled times 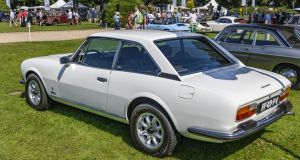 It was a time of trouble and strife, a time of mass public protests. A time of wars being fought in far away places, with people about whom we knew little. A time of scientific discovery, yes, but also a time when debate about the UK’s place in Europe raged and when tribalism was rife in Northern Ireland.

No, not last week, but in 1969. Nixon was in the White House, troops were in Vietnam, trouble was brewing in Belfast and Derry and the UK was separate from Europe. If all that sounds horribly familiar, well that’s just the wheel of history coming full circle, I guess. A shame that the same wheel can’t convince Peugeot to put the 504 back into production, but we can’t have everything.

It’s not as if putting the 504 back on sale would be that big a leap – in spite of having been first introduced on sale when Armstrong walked on the moon, the 504 was an incredibly long-lived car. Both in terms of its mechanical robustness, and the sheer longevity of its production. As late as 2007, it was still being built, new, in China and Nigeria. Travel to places such as north Africa, or Argentina – areas where people really know the value of a car that’s rugged and easily repaired – and you’ll still find 504s in use as taxis, pickups and personal mode of transport.

Such longevity speaks to the rightness of the 504’s original design, but there too lies a tale. The 504’s styling was the result of a mistake.

It’s a sunny afternoon in Sochaux, in the southeastern corner of France. With the Swiss and German borders on one side and the Jura mountains on the other, this is not often thought of as one of France’s idyllic rural spots. Rather, it’s the home of heavy industry. Peugeot has its home here, as does the company that makes and maintains France’s rapid TGV trains. Yet between the factories, there are glades, meadows and river valleys. There are pretty villages and recondite chateaux, all made – egalité, non? – from the same local sandstone.

There is also the Peugeot museum, or as it’s properly known L’Aventure Peugeot. Although it also incorporates Citroen and DS as well these days, this is very definitely Peugeot’s heartland, and the large, comprehensive museum reflects that. But while it’s tempting to hang around the exhibit with the one-off 505 convertible and the four-wheel drive 405 T16 from the 1990s (oh, so tempting) we’re here to celebrate the 504.

Behind the museum is the L’Aventure Peugeot workshop. As we arrive, a hopelessly pretty 404 Cabriolet is having its fuel system converted to run on unleaded petrol, while in the corner the bodyshell of a 1980s 205 GTI awaits a respray and a complete mechanical refit. The workshop’s task is to ensure the mechanical fitness of Peugeot’s own collection of its historic cars, but it’ll also take care of cars for clients and customers. It will even rent out some of its gorgeous originals, for special occasions or even just for a gentle spin up the banks of the Jura river.

Which is, rather pleasingly, what we’re here today to do. We have three classic Peugeots to try out: a 504 saloon, this one built in 1974, and powered by a 93hp 1.8-litre four-cylinder engine. There is also a more glamorous 504 Coupe, this one from 1983, fitted with the fuel-injected 144hp 2.7-litre V6 engine, and a hopelessly pretty 504 Cabriolet, from 1977, fitted with the slightly less powerful carburettor-fed V6.

Needless to say, it’s the Coupe’s keys that I snatch first. Well, why wouldn’t one? Resplendent in a minty green metallic finish, with hugely comfy dark brown velour seats within, it looks as close to perfect as any old car can, fettled so carefully as it has been by Peugeot’s own classic car team.

Thanks to fuel injection, the V6 fires easily into a slightly bland idle (this Douvrin V6 engine was never best known for its aural qualities) and despite the long, wobbly gear lever, the five-speed manual gearbox snicks easily between ratios. With the windows down and the sun shining, we’re off. The recently imposed French national road speed limit of 80km/h – normally a bore – feels like a good idea now, as that’s the sort of speed at which the 504 Coupe feels happiest. Go much faster and you start asking too many questions of the softly-softly suspension, the slightly slow steering, and the terribly spongy brakes.

Still, it’s a lovely thing to drive, with that wonderful aroma of old oil and warm metal that you only find in cars of a certain age. The Cabriolet, to which we then switch, is rather a different bag of French cats. From the outside, it is close to perfection – azure blue paint, no roof, sparking chrome, and the sense that only Catherine Deneuve herself would be adequate to the task of gracing its seats.

Start driving, though, and the result is rather different. This Cabriolet has been less-well cared for than the Coupe. There are tell-tale bubbles of rust in the wings, and someone has fitted a vile 1980s aftermarket wooden steering wheel, and an eyesore of a modern stereo header unit. On the move, with the wind in one’s thinning hair, it’s lovely but corners are not its friend. Chopping the roof off has clearly exposed the structure’s lack of rigidity, and as the car rides over bumps you can clearly feel the doors, windscreen, and steering column all moving arrhythmically in different directions.

How, then, could the 504 saloon be any better? It’s a pretty basic car, even by the standards of the day. The plain cabin is enlivened only by the huge, welcoming velour seats, finished in Cookie Monster blue. The vast steering wheel gives away the fact that there’s no power steering, and there’s not even a rev-counter in the simple dashboard.

Ah, but this is France – egalité, remember? – so being a less expensive, less glamorous car is no barrier to brilliance. And brilliance is what this 504 exudes, from its yellow headlamps to its distinctive drooping bootlid.

Ah, yes. The bootlid. The mistake. Here we must take a deviation back into 1969 and the design of the 504. Organised as a competition and collaboration between Peugeot’s in-house design department and the famed Italian styling house Pininfarina, two clay full-size models – one from each – were delivered to Peugeot HQ to be approved or rejected by the directors. On the day of the decision, Pininfarina’s Aldo Brovarone, who would go on to design the entirety of the Coupe version, decided that the rear of his design was not quite right. Assuming he had time to make adjustments to the clay, he began carving away, only be be suddenly ushered out by the unexpectedly early arrival of the Peugeot board of management.

Regarding the half-finished rear end of the Pininfarina model, all were struck by the downward-sloping shape, and all unanimously loved it. But, the front end of neither proposal was quite right, so both Pininfarina and Peugeot were told to come back again in a few weeks with new ideas for the front, but using the Pininfarina “mistake” back end.

Taking up the story, Hervé Charpentier, the directeur produits et collections at the Peugeot museum told The Irish Times: “So a few weeks later, everyone is back, and it is the Peugeot Design car that is revealed first. And as soon as the sheet is drawn back, the man from Pininfarina interrupts. ‘Do not even take the cover from my car’ he says. ‘That is the perfect front end for the Peugeot 504, and I will tell you why – it has the eyes of Sophia Loren. ’ And that is how the styling of the 504 came to be.”

Sophia Loren’s eyes and incorrect buttocks make for a compelling combination it turns out. Equally, the 504 saloon, even by modern standards, feels like a car that you can truly enjoy driving. With only 93hp on tap, but decent torque, speed comes easily to the 504, and it oddly seems happier to strop along at higher velocities than its Coupe or Cabriolet cousins, helped by brakes that feel sharper and stronger than in either of the more expensive cars. It is softly sprung, leaning over at the slightest provocation, but there’s plenty of grip, and lots of feel from the heavy, unassisted steering.

It’s fun because it’s a car you actually have to drive. There are no computers to help you out, no power assistance to ease your muscles, and absolutely no crumple zones should you get it all wrong. What there is, is the sheer delight of being part of a purely mechanical process once again, the ultimate motoring detox. The 504 isn’t going to do the job for you, but it will work with you if you put the effort in, and the reward is just delightful. Those armchair-comfy seats take the pain out of long stints at the wheel, the engine is endlessly willing and surprisingly responsive, and the whole car seems to vibrate with delight when you perfectly time a gearshift, perfectly nibble an apex, or even just slow down, pop an elbow on to the windowsill for some natural air conditioning, and just take in the natural beauty of La Belle France.

While all this was going on, US president Donald Trump was fulminating, British prime minister Boris Johnson was prevaricating, Russian president Vladimir Putin was plotting and the rain forest was burning. The 504 was a car born into turbulent times and it seems like the prefect antidote, today, to modern times. Forget the nouveau riche stylings of the Coupe, it’s this egalitarian 504 saloon that most resonated with me, 50 years on.

Start them stirring, knife skills at four: how to teach kids to cook
9