Trump fumes as US carmakers pursue drive for lower emissions

President and major manufacturers in stand-off over exhaust emission standards 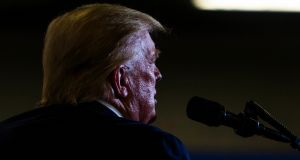 US president Donald Trump claimed on Twitter that Ford wanted “to build a much more expensive car, that is far less safe and doesn’t work as well”. Photograph: Doug Mills/New York Times

A dispute between US president Donald Trump and four major car manufacturers over emissions standards has turned nasty. But the Trump administration’s short-term goals for reducing carbon emissions are so clearly bogus they are enough to have somehow made it possible for the motor industry – a major contributor to global warming – to come out of a disagreement (ostensibly about the environment) looking like the good guys.

Trump has said he applies many of the same principles he used in running businesses to running a country effectively. But when several of your most influential employees publicly oppose and ignore orders coming directly from the chief executive this cannot be a positive indication that this approach is workable in politics.

That’s what’s currently happening in America Inc. A number of major global auto manufacturers, including Ford, Honda, Volkswagen and BMW, oppose a federal government policy objective aimed at reversing car exhaust emission standards (established late in the Obama administration) that would freeze them to a limit of their 2020 miles-per-gallon targets.

For the last three years Trump has been formulating plans “for the biggest deregulatory effort” of his presidency.

One might assume a policy that would ease the financial burden of reducing the auto industry’s carbon footprint would be welcomed by US car manufacturers. Instead Ford, Honda, Volkswagen and BMW have declared their support for California governor Gavin Newsom by agreeing to comply with stricter benchmarks being laid out in the state. It has been reported that Mercedes Benz is soon to join the four, which together produce nearly a third of all vehicles sold in the US.

Upon hearing the news that his efforts to create a nationwide emissions standard were being ignored, Trump did what all credible heads of state would do: he got on Twitter. Singling out Ford as the ringleader, the president told his 63 million followers that its founder Henry Ford would likely be unimpressed that the good name of his company was being dishonoured by its current leadership for “wanting to build a much more expensive car, that is far less safe and doesn’t work as well”.

What the hell was he on about? Notwithstanding the various criticisms Twitter has been subjected to recently, it has never been a suitable medium for providing context: one of the more crucial elements to effective communications that still seems to be an afterthought for most Twitterati (despite now having a whopping 280 characters at one’s disposal).

The tweet was in reference to some warped logic used by officials from the now oxymoronic Environmental Protection Agency and the National Highway Traffic Safety Administration, the two entities who jointly manage fuel economy regulations.

The previous administration had set fuel efficiency targets for new cars to reach a minimum of 55mpg by 2025. When opponents of this target took the helm at the aforementioned regulatory duo they argued it was too ambitious and needed to be revised down because the resulting drop in the price of petrol would incentivise more Americans to drive leading to an inevitable rise in the number of road fatalities. (Warped logic isn’t necessarily always bogus but it’s almost always ridiculous.)

American car manufacturers didn’t like the ambitious targets set by Obama all that much either but knew they were coming sooner or later.

Now the group of rebel car makers has struck a deal with California that all parties appear to be satisfied with. Aside from the obvious environmental benefits of improving fuel economy generally, California is keen to ramp up electric vehicle production.

An economy as large as California’s with a hunger for electric vehicles is just the impetus required by automakers craving regulatory certainty as well as policy support to justify the billions being spent on research and development in relation to electric vehicle technology. Unsurprisingly, therefore, a major component of the agreement reached by Ford and its allies with the Democratic governor of the country’s largest state is a commitment to co-operate with each other in the development of the electric car industry in tandem with the infrastructure needed to make the technology a viable alternative to conventional combustible engines.

Ford alone has spent more than $11 billion (€9.96 billion) on its development of battery-based cars and recently announced it had struck a deal with competitor Volkswagen, allowing it to share the German’s all-electric platform. Volkswagen is also busy with its R&D as it plans to roll out up to 70 different battery-powered new vehicle models across its brands by 2025. The car giant recently revised up its expected production volume expectations in that period from 15 million to 22 million. The first of the new cars was revealed this week at the Frankfurt auto show in the form of the new ID.3.

Trump’s once-powerful strategy for overcoming disobedient subjects – that is, saying nasty things about them on Twitter – may be losing its venom. But this stand-off isn’t over. In the absence of a tweet insulting enough to scare off four of the world’s largest car manufacturers, the US justice department has “opened an antitrust inquiry investigating if the automakers’ deal with California is in violation of federal antitrust laws and could potentially be limiting consumer choice”.

Perhaps it will in the short term, as electric cars don’t enjoy the economies of scale that allow for prices to drop. It’s inevitable that demand will rise, though. And all this short-term thinking in the White House could lead to an even shorter term in office for this administration.