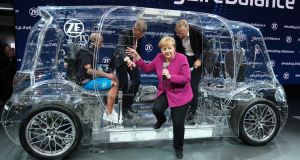 German chancellor Angela Merkel has said the German car industry faces a “Herculean task” in its transition to e-mobility, hours after fresh claims that Volkswagen built defeat devices into a second diesel engine model. After touring the stands at Frankfurt’s international motor show, including close inspection of the new electric models from Porsche, its parent company VW denied that cars with an engine from 2012 onwards had software that detected if exhaust tests were being carried out.

“We are no long facing radical change, it is already reality,” she said, praising German manufacturers for pulling together to produce affordable, market-ready models. “But it shows that trust in electromobility has to grow with customers.”

Four years after trust was rattled in German diesel engines, documents leaked to German public television suggested defeat software was part of the EA288 motor. This is a Euro-6 norm engine and is built into hundreds of thousands of Volkswagen Golf, Tiguan and Passat as well as models of the Audi, Skoda and Seat brands.

The broadcaster SWR said the documents showed that engine software adjusted the amount of Adblue ammonia solution released – to neutralise exhaust gases – if the car’s wheels, but not the steering wheel, were moving.

Volkswagen insisted the motor in question contained “nothing illegal” while the federal transport ministry said it had no evidence of a defeat device.

But car experts saw a similarity in the process to those discovered by US investigators, triggering the 2015 VW diesel scandal that has cost the Wolfsburg group more than €30 billion to date.

More than 11 million cars with the EA189 motor only met emissions standards on the test ramp and emitted 40 times more nitrogen dioxide than legally permitted during real-world driving.

Axel Friedrich, an exhaust expert involved in uncovering the first diesel scandal and a witness to a German parliamentary inquiry, said the documents suggested vehicles with the EA288 motor also “recognise whether it is on the test ramp and then sufficient AdBlue is injected but in normal use on the street much less is used”.

Leading Volkswagen figures have accused German environmental protesters of spreading panic about the industry and its products.

“In the public discussion at the moment one gets the impression that that car is nothing more than a singular risk,” said Bernd Osterloh, VW works council chief, to the Handelsblatt business daily. “On the danger scale it lies somewhere between Ebola and North Korean missiles.”