Frankfurt motor show: What would an S-Class electric car look like?

Possibly a bit like this – Promising a range of 700km on a single charge, the EQS will arrive in production form in 2022 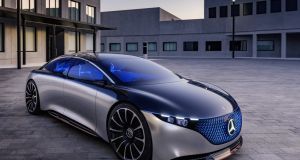 It’s an underbody platform that will underpin an entire range of future Mercedes-Benz electric cars, from premium sedans about the size of the C and E Classes to SUVs, but it will appear first in the production EQS in 2022.

The Vision EQS concept, showing what Benz’s design chief calls “one bow” surface language, will be based off a near production-ready skateboard architecture that will underpin the premium range of Benz’s future electric cars.

The Vision EQS has its battery deep in its floor and its two motors delivering 350kW of power and around 760Nm of “available” torque, along with a top speed of beyond 200km/h.

Despite its obvious heft, Benz claims the EQS can flit to 100km/h in 4.5 seconds, even as it stretches out to a 700km range on the tough, new WLTP energy-consumption test.

It’s capable of recharging 80 percent of the battery in 20 minutes on a 350kW charging station, too, with the lithium-ion batteries sourced from Benz’s in-house battery maker, Accumotive.

Benz has pitched it as more of a driver-oriented car than a self-driving pioneer, though the concept is fully Level 3 capable for highway driving.

No flashy showcar, the EQS is based around a mix of high-strength steels, aluminium and carbon-fibre, and also includes recycled plastics.

It will be the latest in a short line of Benz electric cars, which began in earnest with the EQC crossover. The EQC is, in truth, a hybrid car, with the electric powertrain stuffed into an architecture bred for both internal combustion and hybrid powertrains.

It will take the EQS production car to deliver the first fully-fledged, dedicated EV architecture for Mercedes, though it also has an EQB and the van-based EQV in the pipeline.

“With the Vision EQS technology platform, Mercedes-Benz is opting for a completely new, fully-variable battery-electric drive platform,” Mercedes-Benz said in a statement, confirming the EQS was built on a future production platform.

“This is in many respects scalable and usable on a cross-model basis: thanks to the modern modular system, the wheelbase and track, as well as all other system components, and especially the battery, are variable and therefore suitable for a wide range of different vehicle concepts.”

Its interior is large and white, with a dashboard panelled in wood that harks to luxury wooden lake boats.

Each headlight hosts a pair of holographic lens modules that join up with the rest of the light layout to give the EQS a 360-degree light signature.

Just like they do on the current Mercedes-AMG Formula 1 car, there are hundreds (well, 229) of little three-pointed stars that light up as part of the rear taillight and brake light system.

The fully digital front grille, seen before in Vision electric Mercedes-Benzes, has 188 individual LEDs to deliver precise signalling to other cars and pedestrians. It’s designed to appear free-floating and three dimensional.

The Vision EQS also introduces Benz’s new user interface system inside what it calls its “large interior sculpture” filled with connected light that surrounds the occupants and haptic air vents.

Its dashboard extends to join the main body of the front trim, while the seats are sculpted heavily and obviously and are covered in a microfiber made from recycled PET bottles. Even the roofliner comes from recycled ocean-waste plastic.