Frankfurt motor show: Why is retro all the rage in the auto sector? 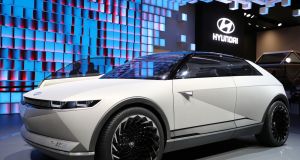 Hyundai’s 45 Concept car look so much like a modernised Austin Princess from the 1970s. Hyundai openly says — the car is inspired by the original 1974 Pony Coupe Concept

Reverting to a happier, nostalgic time is a classic trope of infantilism. It’s what drives the huge pop culture surge in things that remind us oldies of our childhood (Stranger Things harks back to 1980s films; the Marvel Cinematic Universe is our school day comic books on the big screen; The Great British Bake Off is coming home to fresh scones repackaged for streaming TV) and it seems now that it might be a safe place for car makers to go, to hide away from the strictures and stresses of where the modern motor industry is going.

That, at least, is the best explanation I can offer for why Hyundai’s 45 Concept car look so much like a modernised Austin Princess from the 1970s. OK, so clearly — as Hyundai openly says — the car is inspired by the original 1974 Pony Coupe Concept, which drew on the same well of ‘folded paper’ design as did the Princess,  but it still seems slightly odd to me that this should be Hyundai’s choice of influence for its future electric cars.

I don’t mind especially — the 45 Concept is rather gorgeous, so if Hyundai wants to make a production car, then that’s all good — but it does seem as if many car makers are aiming for retro designs and even ideals, possibly as a personal hiding space; possibly to try and make customers feel more comfortable about stepping into the future.

Elsewhere at Frankfurt, retro-ness was also evident. None more so that on the Volkswagen stand. No, not the new ID3 all-electric hatchback — that’s hardly retro (although there is a slight Ur-Beetle touch to the fact that it’s both rear-engined and rear-wheel drive) but in the shape of an original Beetle, repurposed to electric power with the motor and batteries from an e-Up city car. Charming, obviously, but also capable of putting some modern machinery to shame with its 200km range.

Land Rover’s new Defender is so obviously retro that I hardly need to mention the fact, but over at sister brand Jaguar, retro-ness was also in the air. The new XJ saloon was being teased, for a fraction of a second, in a photo shown on a giant video wall. It will be all electric, and will go on sale next year, but rest assured that it will also hark back to classic Jaguars of yore (albeit not with the painful pastiche that marked out Jaguar’s early-2000s effort).

Equally retro-seventies is the sight of a British car maker struggling, as Jaguar is right now, battered by falling sales, most especially in China. Chief executive Ralf Speth tried to put a brave face on things, pointing out how many jobs in the UK will be secured by the XJ’s production, but it was notable how bare the Jaguar stand was of newness. Notable also, that Land Rover’s white knight Defender is actually built in Slovakia (which hopefully means it will have superior levels of build quality to previous products).

Bentley, meanwhile, went full retro. Like, as retro as you can get. Clearly it’s had enough of making modern cars influenced by past glories and has decided to cut out the middle-man entirely, announcing a 12-strong run of bolt-by-bolt recreations of the legendary 1929 4.5-litre supercharged ‘Blower’ Bentley. One has to admire the sheer chutzpah of the idea, and presumably given the many, many millions that Bentley will be able to charge for these cars, this 80-year old design will have a much higher profit margin than any of the company’s modern, VW-based products.

Let’s move away from retro, for a moment, shall we? Let’s head over to the Seat stand, where the Spanish brand is pushing hard on both the electric and performance buttons. The new 240hp plugin-hybrid version of the seven-seat Tarraco SUV looks like a thoroughly logical product, and should avoid the low-speed sleepiness of the current diesel version. The Tavascan concept, a product of Seat’s spun-off Cupra high performance brand, looks even  more enticing, with its cut-price Lamborghini styling, and promise of 306hp performance from two electric motors. Seat’s sharp-suited president, Luca De Meo said: “Frankfurt comes at a great time for us, with historic sales and financial results. Our position enables us to remain committed to and continue investing in mobility for future generations with solutions that adapt for tomorrow. Electrification is a key part of this mobility, as are micromobility and the development of solutions that cater to it.”

Seat’s cousin, Skoda, arguably (and unsurprisingly) had the most sensible stand at the show, displaying a fully-electric version of its Citigo small hatch (the identical triplet of the VW Up and the Seat Mii) and a plugin-hybrid version of the updated Skoda Superb saloon. That Superb will make its Irish debut next week, at the National Ploughing Championships, but will Ireland’s rural buyers be ready for a sensible Skoda that comes with a plug?

Elsewhere, it’s notable that there are a number of new cars appearing at Frankfurt that have not even a snowball’s chance in Hades of making it to Irish shores. First among these absent equals is the new Ford Explorer, and I think that’s a crying shame. Yes, it’s an oversized American SUV, but it’s really handsome, and with hybrid power you’d think there might be a market here for at least a few. No right-hand drive production is planned, alas.

Also not appearing in Ireland is the revised Volkswagen e-Up (which you’d think would make an eminently sensible small electric car purchase), the glorious 455hp Alpina B3 Touring (a BMW M3 estate in all but name), the lighter, more focused, Hyundai i30N Project C hot hatch, the all-electric Smart ForTwo and ForFour (now with added Chinese ownership), nor even the mildly sporty Monte Carlo version of the Skoda Scala hatchback. Was it something we said?

Ferrari had its own mini-motor show at its factory in Maranello, and launched two new convertibles — the 800hp 812 GTS V12, and the 720hp F8 Spider. Neither is what you might call exceptionally relevant, but hey, they’re gorgeous and loud.

Also fitting that description was Lamborghini’s Sian, an 819hp V2 mid-engined monster, which boasts a mild-hybrid system that uses super-capacitors, not batteries. It looks utterly wild, but was arguably overshadowed by Bugatti’s announcement that it will make a limited run of the modified Chiron that it recently used to break the 300mph (490km/h) barrier. The world’s fastest car? Sweden’s Koenigsegg would beg to differ on that point.

Mercedes’ stand was all about electrical range, whether we’re talking 700km (the luxurious, and rather gorgeous, EQS concept), 400km (the sensible, practical, EQV van-based electric MPV), or 100km (the diesel plugin-hybrid GLE 350de). Arguably of greater sales import was the new GLB compact SUV, with its optional seven-seats and chunky, square-shouldered styling. One suspects that it will be a massive seller once it (shortly) reaches these shores, but yet again here is a car maker that’s reaching back to the past (the original G-Wagen) to give a new car a sense of heritage and buyer appeal.  Clearly, it’s working, but is that truly progress?

The most important news of the day was, just possibly, to be found on a small stand, distant from the rest. Pininfarina, the legendary Italian design house, has partnered with Bosch, and German engineering firm Benteler, to produce its own adaptable electric car chassis. The Italian company will build its own-brand range of cars on the platform, but it’s also going to offer it to other car makers for their use — a fully-ready, adaptable, modular, electric car platform which can be pretty much plugged-and-played. All through the fifties, sixties, seventies, and onward, Pininfarina made beautiful bodies to sit on the chassis and engines of others (everything from the Ferrari 250 GT Lusso to the Peugeot 406 Coupe). Now it has reversed that equation. Amid all the retroness of Frankfurt 2019, and with predictions floating around that car makers will increasingly outsource production so as to better rebuild themselves as digital giants, perhaps the Pininfarina stand was the least retro of them all.