Could demand for new cars in China be peaking?

Industry worried about falling Chinese sales, along with Brexit and tariff threat 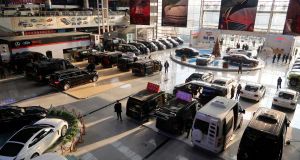 A car dealership in Tianjin, China. Global demand for cars is starting to stall, according to Deloitte, with recent forecasts showing annual growth limited to between 1.5 and 2.5 per cent. File photograph: Yilei Sun/Reuters

While the first reaction to Honda’s announcement of its UK plant closure was to blame the infernal machinations of Brexit, there may be a larger, more worrying elephant in the room. Certainly, the UK’s parlous attempts to decouple itself from the European Union will have weighed upon Honda’s decision, but there is another factor, a huge one for the global car industry: sales are falling.

Sales are especially falling in the market that was the great hope for the car industry – China. According to the latest figures from the China Association of Auto Makers (CAAM), sales have slipped by 15.8 per cent year-on-year in January 2019. That follows a 13 per cent fall in December, and a 14 per cent drop in November of last year.

“Car Sales in January continued to decline, and there was no sign of improvement. We estimate that February wholesales will also drop sharply. The reason for the sales drop is still the slowing overall economy, and consumption decline in small and medium-sized cities.” said CAAM assistant secretary general Xu Haidong.

If sales are catching a cold in China, then the rest of the car world might catch a flu. “peak car” is, rather like “peak oil”, a much bandied-about term, often used to describe a theoretical maximum global demand before a long, slow but irreversible fall in demand. Peak oil fears were largely allayed by discoveries of new reserves, and likewise peak car concerns, once expressed about the European and US car markets, were largely put aside with the end of the most recent recession and the re-emergence of car buyers into the market.

China, though, could be a very different story. While car sales bounced back firmly in Europe and the US in line with economic gains, peak car could possibly be a real thing in China, as demand for cars, and vehicle usage, seems to have become decoupled from economic growth.

Tucked away in the recent Intergovernmental Panel on Climate Change (IPCC) report are signs that – in Beijing, at least – people are driving less but earning more.

“The actual car use, different from car ownership, is reflected by per capita vehicle kilometres travelled (VKT) and modal split of daily trips by automobiles,” says the report. “Per capita, VKT has increased steadily through the beginning of the 2000s and then peaked in 2010 before sharply declining despite the continuing economic growth. It is set out showing how the decline is not caused by a decline in economic growth; on the contrary, car use has declined during a period of substantial economic growth in Beijing.”

How has this happened? Simple – the Chinese authorities have decreed it. The implementation of policies such as a lottery system for number plate assignments, which effectively caps annual vehicle sales, and the sudden and rapid expansion of Beijing’s metro rail system (largely installed for and since the 2008 Olympics) has reduced car usage and ownership, but not put even the slightest dent in economic prosperity. Unless you’re trying to sell Jaguars in China, of course.

According to the IPCC, car ownership in Beijing grew at just 3 per cent in 2011, compared to a whopping 23 per cent in the previous year.

In Europe, passenger car sales are more or less stagnant, growing by 0.1 per cent in 2018. That sub-1 per cent growth rate is expected to continue in 2019.

“Given this rather shaky growth forecast, we will need to take every effort to safeguard our industry’s competitiveness, bearing in mind some of the major challenges ahead,” stated Carlos Tavares, president of the European Automobile Manufacturers Association (ACEA), the umbrella group that represents European car makers. “These include meeting stringent car and van CO2 targets both for 2020 and the recently-agreed post-2020 targets, the looming prospect of a no-deal Brexit, and the ever-present threat of tariffs on US car imports.”

Although Tavares did not reference the Honda factory closure directly, he did point out, once again, that Brexit is a potential disaster for the European car industry. “The prospect of a no-deal Brexit still has not been ruled out. On the contrary, this scenario looks more likely than ever before,” Tavares warned. “The harsh fact, however, remains that none of this can realistically cover all the gaps left by the UK’s withdrawal from the EU on WTO terms. That is why we are urging both sides to redouble their efforts to successfully conclude a withdrawal deal in these crucial final weeks.”

According to a report by Deloitte: “Global demand for light vehicles is starting to stall. Recent forecasts expect annual growth to be limited to between 1.5 and 2.5 per cent going forward into the middle of the next decade. At the forefront of these concerns is the United States, where most analysts are predicting a cyclical downturn. A significant uptick in the level of incentives (the amount car makers pay for special offers and discounts), suggests that the market is already being artificially propped up.”

The news gets worse – at least for the traditional car makers, the ones with big factories and massive workforces. Such “legacy” car makers (a term that’s fast becoming pejorative) potentially face being squeezed out by so-called “disrupters” which range from electric car makers such as Tesla, to fleet operators such as Google, Uber, and Lyft. “We see multiple business models coalescing to form a new ecosystem, centred on technology innovators, fleet operators, services businesses, and platform providers,” says Deloitte. “Vehicle manufacturing will likely continue to be important, but value will increasingly be generated by software and consumer data.”

That’s why you see so many car makers, these days, refer to themselves as “mobility providers” rather than manufacturers. Many have seen, on the horizon, the falling margins when it comes to building big metal boxes and selling them by the hundreds of thousands. It’s why Renault’s big announcement at the Paris motor show last year wasn’t a new Clio, but a collaboration with a French media company to produce and curate streamed entertainment and infotainment for those using shared, autonomous cars.

Such groundwork is already being laid. Skoda Ireland has announced that, so keen is it to get car buyers started on using connected and online systems built into the cars, that it’s going to provide a free SIM card, pre-loaded with a month’s worth of usable data, to all new buyers. Skoda clearly hopes that, by offering people a trial of such services, they can get drivers hooked, and start offering longer contracts, earning Skoda valuable subscription fees. Cathal Kealey, PR manager with Skoda Ireland, commented: “We are delighted to be providing customers with free-of-charge SIM cards for more convenient access to Skoda Connect. This will enable and encourage our customers to use these features effortlessly without having to worry about purchasing SIM cards or setting up wifi hotspots to pair with the car. Customers can renew their subscription with Vodafone by accessing a specially developed portal; alternatively, they can choose to discontinue their data plan without obligation.”

While such digital revenue streams may well bring in some cash for car makers, when it comes to the business of making oily stuff, it’s not looking good.

Why Waterford is ‘the best Covid county in Ireland’
10