510hp Stelvio Quadrifoglio is the most pointless, but also the most fun, SUV we’ve driven 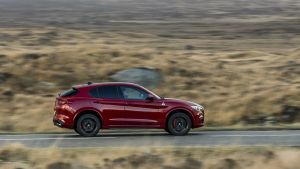 We’re leaving a scarlet streak across the wintry Kildare landscape, the glossy red paintwork of the Alfa Romeo standing in stark contrast to the muddy greens, greys, and brown of rural Ireland. We’re not hanging around long enough to leave much of an impression, other than a fleeting burst of eardrum-shattering noise. The violent coughs and gunfire sounds coming from the exhaust could make you think that the sound effects team from Dirty Harry have taken up residence in the boot. These are all familiar feelings, when driving an Alfa Romeo, it’s just that we’re sitting about a foot higher up than usual.

Okay, let’s be honest. The whole concept of a high-performance SUV is an entirely daft one. SUVs evolved from their Land Rover and Jeep progenitors, originally designed for crossing soft, muddy fields, not clipping the apices of corners on race tracks. Charles Darwin would have dashed his quill to the ground and smacked some monkey samples off the shelf at the bizarre series of unnatural selections that have led us here. Led us to Alfa Romeo cramming its 510-hp, twin-turbocharged, essentially-Ferrari-designed-and-built V6 engine into a car that should be theoretically happiest hauling a horse-box.

And yet here we are. The Stelvio Quadrifoglio. Quadrifoglio, or four-leafed clover, is a badge that dates back to the earliest days of Alfa Romeo, originally applied by Italian racer Ugo Sivocci to his 1923 RL Targa Florio racer. Sivocci did it for good luck, and it worked. Worryingly, Sivocci later died in a crash at Monza, when he did not have the lucky logo applied to his car, and Alfa Romeo has retained it as both superstitious charm and high-performance signifier ever since.

Alfa could do with some good luck right now. While the plan to rebuild Alfa Romeo sales with the Giulia saloon and the Stelvio SUV has been partially successful, the storied brand is on track to shift only around 140,000 cars, worldwide, this year. That’s not a lot, but at least the Stelvio does seem to be pulling its weight, accounting for a little less than half of those sales. It’s also been out-selling some key rivals, such as Jaguar’s F-Pace, although it remains some way behind the likes of Audi’s Q5 or the Mercedes-Benz GLC.

However, the Stelvio does have an ace up its sleeve against such vehicles, if you take the trouble to find it. It’s fun. Like, big, proper fun to drive. Not to say that such rivals aren’t impressive to drive, but outright smile-painting, fun? Nope, certainly not as much as the tall Alfa is on a twisting road. And that’s the standard diesel model. As for the Quadrifoglio...

It’s basically the Giulia Quadrifoglio saloon with a taller body, but with one crucial addition - four wheel drive. The Audi’s Q4 system at a stroke renders it more useful, in an Irish sense, than the super-saloon simply because you have 100 per cent more traction options when the road gets tricky and slippery. And our roads are nothing if not tricky and slippery.

The engine is, simply, an utter star. It’s the sort of engine that only an Italian company could make, managing to sing and bellow at the same time, and when you mash that big organ-style throttle pedal to the carpet, the sounds that it makes as it approaches, breaches, and retreats from its 6,500rpm power peak are simply marvellous.

Whatever it is, it’s not slow. With the ripple-fire effect from the upshifts of the eight-speed automatic gearbox (standard on all Stelvios) assaulting your ears, the Stelvio gives the stopwatch a good kicking too, hitting 100km/h from standstill in just 3.8secs. That’s fast enough to make mincemeat of a BMW M3 or a Mercedes- AMG C63 saloon. Bloody quick, in other words.

Thankfully though, the Stelvio isn’t all about its engine to the detriment of its chassis. You have to attune your hands and wrists to the steering, because it’s so high-geared and fast that it’s actually a touch twitchy off-centre, until you get used to it. Once you do, though, it’s wonderful - bouncing around in your palms almost in the style of old Porsche 911, constantly transmitting a stream of information about the car’s behaviour and the road’s surface to your palms. It’s far more involving than any rival that we’ve driven, up to and including Porsche’s Macan Turbo.

The handling is mostly assured and sure-footed, but even with the Q4 and the sharp steering, the Stelvio Quadrifoglio can feel a touch jittery at times. You’ll want to always drive it in Dynamic mode, to get the best throttle response, but you’ll have to have the damper button, to soften off the suspension, pushed or the setup is just too stiff for Irish roads. Advanced Economy mode is just too dead to the throttle to bother with unless the fuel warning light has come on. Which it probably will do. Alfa claims you’ll get 9.8-litres per 100km fuel economy (that’s 28.8mpg) but, yeah, good luck with that.

The interior kind of flatters to deceive. It mostly looks good, with lots of carbon-fibre splashed around the place, gorgeous high-backed bucket seats, and white and green stitching in the leather, which combines with the red paintwork (other colours are available, but come on, why would you?) to form the Italian flag. The steering wheel feels fabulous in your hands, as do the massive milled aluminium gearshift paddles, but there are issues elsewhere.

Some of the buttons and switches are super-cheap and nasty, the infotainment system is over-simple and its screen is too small, and we definitely heard some squeaks and rattles from deep down in the dashboard. And wind noise is a bit excessive around the tops of the side windows. Not great for a car that costs €127,095 as driven. And while it’s more fun than the Porsche, you’d have to be worried about how much of that cash would be left over at the end of three years, compared to the Porsche’s residual performance.

Still. Barrelling across Kildare, aiming a bright red dart between dull green hedges, ears battered by the pummelling from the exhausts, I don’t think I care about rattles, or residuals, or anything else. Darwin be damned, this is a fast, fun, SUV that deserves to be driven.