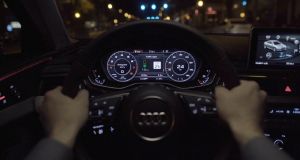 Green Light Optimized Speed Advisory (GLOSA) uses vehicle-to-infrastructure communication technology to allow the car to ‘talk’ to the traffic lights near it, and get data from them as to how long it will be before they switch from green to red or vice-versa

Audi claims that its new ‘GLOSA’ technology is designed to predict when the traffic lights ahead of you will turn green, and how fast you should drive in order to be able to catch them before they go red.

Green Light Optimized Speed Advisory (GLOSA) uses vehicle-to-infrastructure communication technology to allow the car to ‘talk’ to the traffic lights near it, and get data from them as to how long it will be before they switch from green to red or vice-versa.

Survey data from the American Automobile Associaiton Foundation for Traffic Safety shows that the average American driver spends nearly 300 hours a year behind the wheel, the equivalent to seven 40-hour weeks at the office. Audi reckons that providing drivers with info that can help them to catch a ‘green wave’ of traffic lights, can help reduce anxiety and improve a driver’s comfort during their time behind the wheel.

“Audi is committed to moving America in many ways, including through the development of industry-leading connectivity and mobility solutions,” said Mark Del Rosso, president, Audi of America. “Not only do vehicle-to-infrastructure technologies like GLOSA benefit drivers today, they’re also the critical steps needed as we continue toward an automated future.”

Right now the system is only available in the USA, and you’ll need an Audi Prime internet connection account to use it. Using it costs USD$199 for six months, or USD$499 for 18 months, and is available on the A6, A7, A8, and Q8. While that’s certainly not cheap, Audi reckons that future versions of the system will be able to intelligently re-route you to either get as clear a route as possible, or to make maximum use of the car’s stop-start system, thereby saving fuel.

The GLOSA system is a development of Audi’s existing (also US-only) Time To Green system, which ‘talks’ via the car’s 4G LTE communications setup to nearby traffic lights, and displays a countdown on the instrument panel to when the light will turn green.