No more hogging the space as technology makes ‘lane-keeping’ easier 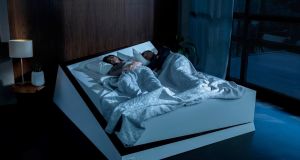 No rocking but rolling in Ford’s bed.

Ford may have recently lurched into financial crisis mode, and be cancelling the production of hatchbacks and saloons as quickly as it can ramp up the development of new SUVs and crossovers, but that doesn’t mean that the automotive giant has lost all capacity for whimsy.

For instance, Ford has now developed a high-tech ‘Lane Keeping’ bed that prevents you unconsciously encroaching on your partner’s side of the mattress, using systems derived from the lane-keeping steering technology found in its cars. No, you did not read that incorrectly.

“Lane-keeping aid in our cars can make driving easier and more comfortable. We thought that showing how similar thinking could be applied to a bed, would be a great way to highlight to drivers a technology that they might not previously have been aware of,” said Anthony Ireson, director, marketing communications, Ford of Europe.

According to sleep experts, we naturally, and without ourselves realising it, make 15-20 “major positional changes” every night, and not surprisingly some of those movements cause our sleeping partners also top move, and often that means that one person is getting shoved out to the edge of the bed.

Ford has dressed this up as a serious concern for a motoring company, saying that: “Sleep loss increases the risk of injury and accidents at home, work and on the road.” To help combat this (supposed) problem, it’s developed a bed with a rolling mattress, and built-in pressure sensors. When those sensors detect that one person has taken up more than their fair share of the bed space, the mattress rolls to one side or the other, evening up the space again, and making sure that the innocent slumbering party isn’t left with only inches of bed left in which to sleep.

“When sleeping together, many couples each have less space than a small child has in a single bed,” said Dr Neil Stanley, an independent sleep expert and author of How to Sleep Well. “Humans are most vulnerable when sleeping, so we’re programmed to wake when something or someone touches us unexpectedly. If someone moves onto your side of the bed this defence mechanism will kick in and you’ll have a broken night, often while they continue to sleep soundly. I’ve seen it ruin relationships.”

1 Who are Ireland’s 17 billionaires?
2 Ireland has fifth-largest number of billionaires per capita in the world, says Oxfam
3 Ireland ranked second in Europe for data breach notifications
4 Tullow Oil expects write-offs of $1.5bn
5 Ireland has an ‘accommodation crisis’, not a housing crisis
6 The Irish economy is thriving but if you’re not feeling it – here’s why
7 Markets flat as investors await signing of US-China trade deal
8 Report claims liquid natural gas plant not needed in Republic – Wallace
9 How to . . . enable the Windows 10 dark theme – and why
10 Expensive housing, long commutes, poor services making Ireland ‘less attractive’
Real news has value SUBSCRIBE