DS 7: Stylish French model made for the catwalk not Irish roads 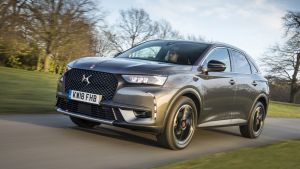 First impressions are lasting, but second impressions stick. That’s as true about cars as it is about people. For a relatively new entrant into the premium car market such as DS, making the right impression really matters.

Several years ago, in a backroom off the Citroën stand at the Geneva Motor show, the then-recently appointed boss of DS outlined the strategic plan. While it was an admirably detailed and well-researched business plan, it boiled down to a French take on Toyota’s playbook for creating Lexus. The timeline of 10 years to become a serious player was even similar to that of the Japanese premium brand when it started out. And Citroën had an extra arrow in its quiver: heritage. DS means something to motorheads. It was the model name of one of the most famous – and innovative – cars to come out of France. It is as French as De Gaulle, Gitanes and Edith Piaf. It represents a time when French design and innovation was on a par with the world leaders.

Success, although certainly not overnight, seemed to be mapped out for the Citroën sub-brand. Needless to say, issues outside their control played havoc with the plan – the global recession to name but one – so the wheels have sort of come off. Anecdotally, public awareness of the brand is pretty limited, not helped by the lack of a dealer network on the ground.

So in many ways this is a second run-out for the brand, pitching to a car-buying audience who missed the show when it last came to town.

Nevertheless, the pitch behind DS is intriguing. Why shouldn’t the French be able to deliver a premium French brand? After all, if you listen to the average barstool sage, all cars are virtually the same these days anyways, so it’s just about the looks and the interior plastics. And who has a better chance of making money on the back of fancy styling than the French designers?

Certainly in styling terms the DS 7 Crossback delivers. On the right set of alloys this is a real head-turner. And it’s targeting the most popular format right now. At a price that comes in below similarly-sized rivals from the German trio, it catches the attention. It starts at an enticing €36,000 for the 1.6-litre petrol and €38,300 for the 2-litre diesel. Upgrade to the Performance line of our test car and for under €50,000 you are getting a car with a suede-covered dash and centre console. The last car we drove that was draped in this much suede was the new Aston Martin Vanquish.

Throw in an impressive touchscreen display that’s surprisingly responsive (for a French car brand) and you start to see why traditional BMW and Mercedes owners are rightly impressed by the car and its price. There’s a lovely attention to detail throughout the styling as well, with the DS diamond format carried through from the front grille into the car itself, influencing the styling of the dials and even the window switches.

So the barstool sage seems to be right and the French have done all they need to beat the Germans at their own game.

The problem is that all cars aren’t virtually the same these days. This DS delivers on style and the interior definitely wows, but where the DS7 Crossback comes a cropper is on your typical Irish road.

The car boasts a multilink rear suspension that means greater responsiveness and poise, or at least it should do. However, with adaptive suspension settings, even in comfort mode there is too much intrusion from the road surface, up through the floorpan and even in the steering wheel.

Those 20-inch alloys on the Performance line trim are all-important for the car’s styling, but they’re like stilettos in a cross-country race when it comes to cushioning the cabin on bumpy roads.

There’s an unfortunate irony in the rough ride of the DS 7 – which is a complaint levelled at most of the earlier models from the new premium brand as well – because travelling in the original 1960s model that gives the brand its name was a magic carpet ride. In terms of suspension and comfort, it was a motoring marvel.

What’s even more surprising is that the ride is so lumpy when you consider these are the same underpinnings of the award-winning Peugeot 3008 and 5008 and the equally impressive Citroën C5 Aircross. Sadly, whatever the engineers have done to give the set-up a DS DNA doesn’t suit the driving characteristics of Irish roads. Even with the wonderfully cosseted seats, the ride feels choppy.

Power is provided by a decent range of engines. On our test car it was the range-topping 2-litre 180bhp diesel engine and impressive eight-speed auto transmission, but you can opt for a 130bhp version or a 1.6-litre petrol developed in association with BMW. Performance is restricted by the fact this car weighs in at 1.5 tonnes. PSA’s plug-in hybrid technology will arrive in the DS 7 Crossback in Ireland in the coming months, offering an official full electric range of 60km before resorting to petrol-electric hybrid mode. It can’t come a moment too soon, for the brand needs a hook in the engine department to get customers talking.

A new generation of buyers are open to the idea of looking outside the established brands. But the French engineers need to reconsider what they’re delivering in terms of driving dynamics on the road. Whatever their recipe, it’s not to my taste.

DS has the DNA to deliver a proper premium rival to the Germans. This, sadly, is not the car that will do it – though it comes so close.

Verdict: DS delivers on style and price, but disappoints with a choppy ride on Irish roads