Hybrid power is taking off, in sales terms, but is it about to be swamped by battery power? 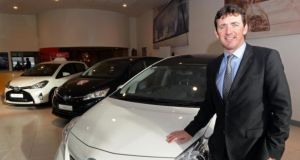 Toyota’s hybrid system, as the chief executive of Toyota Ireland puts it, “is an overnight success that’s taken 20 years”.

Certainly, there seems to be a sense that, after two decades of patiently pushing hybrid power, Toyota is finally seeing the fruits of its original investment. Irish buyers are waking up to the potential of hybrid, as diesel diminishes in popularity and hefty EU fines for exceeding Co2 emissions limits roll over the horizon.

Is it all too late already, though? Hybrid sales may at last be growing, but electric car sales are growing at a far faster rate (albeit from a far lower base). So has hybrid effectively already had its day? Many of the world’s carmakers seem to think so, and are planning to skip over closed-loop hybrid systems in favour of investments in plug-in hybrid and battery electric cars. Toyota, though, is sticking to its guns.

“Especially at this moment, from a viewpoint of usage, and real life, and how our customers actually use their cars, hybrid still has an advantage over battery electric cars,” Yasushi Ueda, the chief engineer for the new Toyota Corolla, told The Irish Times. “Of course, in the coming future, at some stage, there will be pure battery electric on top of hybrid. But at this moment, for Corolla, as a popular car, we’d like to ask many customers to enjoy their driving, and this means we have to give them something practical to drive. So there is still and advantage, in the coming years, for hybrid. Not just in performance, but in accessibility and price point, and infrastructure, this is what we believe.”

That’s a view echoed by Toyota Ireland’s Steve Tormey. “You don’t need to go full electric just yet,” he said. “We can meet our 2021 emissions figures, that 95g/km average, easily with hybrid power.” There’s certainly more than a suggestion that, for other carmakers, the need to skip closed-loop (or self-charging, as Toyota would have it) hybrids is because they failed to make the necessary mental leap, and the investment, two decades ago. “That’s the way they think in Toyota,” says Tormey.

“They saw this day coming all those years ago. They just think longer term, and I would say they think more about what’s the right thing to do. When everyone was talking about ‘clean diesel’ Toyota was working on hybrids, because we knew that, if you go to the US or Japan, there is no diesel. So if we were going to reduce our emissions, reduce our Co2 levels, that there had to be a better way. I remember, back in 1999, going to a Toyota presentation about hybrid, and back then the engineers were putting up charts about nitrogen oxide emissions, and particulate matter, and how we would have to reduce those. No one else was talking about that until ‘dieselgate’ hit.”

When dieselgate did hit, Toyota pounced, and its Lexus luxury division swiftly launched a “Diesel is Dead” advertising campaign that ruffled more than a few feathers in the Irish motor trade, and beyond. Toyota’s defence of the campaign is to point out that for Lexus, as a brand, diesel was dead – it was moving over entirely to hybrid power – but this defence is delivered with a gentle smile and an admission that “we knew what we were doing”.

More recently, the publicising of Toyota’s hybrid line-up as “self-charging” has seen feathers being ruffled again, this time the feathers of the electric carmakers who claim that such a phrase muddies the waters of the battery power and charging debate. Tormey says that, actually, it’s about educating the consumer, not confusing them. “We would have had people coming in to look at cars in dealerships, and when the word ‘hybrid’ was mentioned they immediately put their hands up and would say ‘I don’t want to be messing about with plugs or anything like that’ and they just wouldn’t discuss it further. So the ‘self-charging’ thing is about trying to communicate one of the core benefits of the hybrid powertrain, not to try and confuse people, nor put them off electric cars.”

Recent advertising by some electric car dealers, bemoaning the “high running costs of hybrids” are dismissed with a chuckle.

Eventually, of course, that discourse will have to change. Eventually, of course, there will have to be a Corolla, and other Toyota models, powered exclusively by batteries, but Ueda says that’s not going to happen for a while. “We are investigating several ways to power our cars for the coming future, but this is broader than just Corolla, it’s about the whole country. As for a battery Corolla, I cannot say simply because I don’t know,” Ueda said.

He is determined to make hybrid power more and more appealing to customers, though, not least by making the latest generation of Corolla actually fun to drive. “When it comes to the sharper driving dynamics of the new Corolla, yes I think the average Corolla customer is ready for that. So making the new Corolla fun to drive was part of the very beginning of its development. I started on the project in 2015, and we had already set ourselves a big target that a Corolla should be more fun to drive, and should have more dynamic styling, and that these would be the key pillars of the car. It was already a much more important thing for Europe, but it has become more important in other territories such as the US and Japan.”

Beyond Geneva, there is a major question mark hanging over the Corolla, hybrid or otherwise, and that’s Brexit. The Corolla five-door hatchback and Touring Sports estate are built at the company’s vast factory in Burnaston, in Derbyshire.

“From our perspective, from the perspective of investment into the facility in the UK, nothing has changed. We are committed to continuing to produce the Corolla hatchback and Touring Sports estate in the UK, and that will not change,” Toyota’s head of PR in Europe, Rob Tickner, told The Irish Times.

“Quite how we manage that, it’s difficult to say at this point. Even though there are only around 40 days to go to the end of March, it’s still not really clear what’s going to happen and there are many things to consider. Those may include logistical elements if there are some sorts of tariffs or if we go to a WTO arrangement. The other is financial. In this kind of segment, we’re operating on quite slim margins, and things work on a knife-edge, but we’ll have to find a way to cope with that. We certainly have no intention to pull out of the UK.”

As far as Ireland is concerned, the direct effect of a border between us and the Burnaston factory would be less of an immediate concern. The bulk of Corolla sales here will be made up by the saloon variant, which is built in Turkey, and Toyota insiders have confirmed to The Irish Times that, in the event of a worst-case Brexit scenario, the factory would likely move away from the current “just-in-time” manufacturing system, and revert to a more old-fashioned stockpiling system, both for parts coming in and cars going out. The recent trade agreement between the European Union and Japan will likely see, over time, reductions in the cost of importing Japanese-built cars.