Seat launches the Tarraco seven-seater, while Toyota updates the Prius 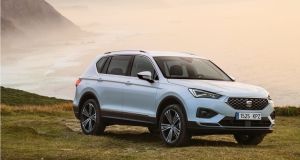 Seat's new Tarraco joins the battle of the seven-seat SUVs

The craze for seven-seat SUVs gets another entrant from this week as Seat has officially introduced the Tarraco, its seven-seat SUV, based on the same mechanical package as the Skoda Kodiaq and the Volkswagen Tiguan Allspace.

Sales kick off with a choice of two 150hp engines - either a 1.5 TSI petrol or a 2.0-litre TDI diesel. The most affordable model is a 1.5 TSI SE five-seat version, which starts at €34,700. Want a diesel? You’ll have to spend €37,250 for the five-seat 2.0 TDI SE. Want seven seats? Somewhat oddly, when rivals such as Peugeot chuck in the extra row for free, you’ll have to add an extra €1,000 to either of those prices. VW Group, across all three of its seven-seat SUV models, seems to think that some buyers want to pay less and have a bigger boot.

Niall Phillips, Brand Director at Seat Ireland said: “We are very excited to welcome the Tarraco to Ireland in 2019. There has never been a greater demand in the Irish market for SUV vehicles and Seat has been satisfying this demand over the past couple of years through its existing SUV range comprised of the Seat Ateca and Arona, models which have enjoyed remarkable success. The introduction of the Tarraco now allows Seat to target a different customer segment again and we are extremely confident that it will resonate with Irish motorists. Its introduction is another key milestone in the overall evolution of Seat. It’s great to be able to continue to offer motorists an even greater variety of high quality vehicles.”

Meanwhile, Toyota has updated the Prius hybrid, but you’ll be needing to break out the magnifying glasses to spot the differences between this one and the outgoing model. The the front, the car retains its slightly ‘fishy’ styling, but there are new, and subtly reshaped, headlights, with ‘Bi-Beam’ LED units, while the bumper has been reshaped. At the back there are also new lights, and new bumpers, while the cabin gets some upgraded fabric trim, some changes the buttons and controls on the centre console, and a new, larger, wireless charging tray to cope with the latest big-screen mobile phones.

There are also two new colour options for the Prius - Pearl Red and Aqua Breeze - as well as a new 17-inch alloy wheel design and a new contrast dark grey finish for the 15-inch wheelcaps. Prices for the Prius are going up, though. Both models - the €32,250 base version, and the €34,950 ‘Luxury’ model - are now €800 more expensive than before.

Commenting on the pricing announcement, Steve Tormey, chief executive of Toyota Ireland said: “Since the first ever Prius was launched to market in 1997, Toyota has proven time and time again that we are an innovative company, constantly evolving, and pioneering new technology to make our self-charging hybrids even more efficient. With even better styling and improved levels of comfort the Prius remains our iconic self-charging hybrid and we look forward to showing our Irish customers the latest model when it arrives in Ireland shortly.”