BMW 8 Series: A big, beautiful coupe you’ll never want to get out of

The huge BMW is supercomfortable, but Porsche’s 911 is still the performance benchmark 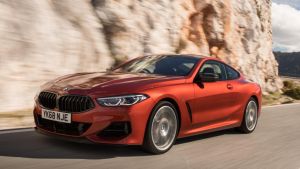 Striking: The BMW 8 Series is a seriously good-looking coupe

A hilarious meme – well, hilarious if you’re a motorsports nut – went around at the time of last year’s Le Mans 24hrs. It was a series of photos, suitably doctored, that showed the GT category cars of Aston Martin, Corvette, Porsche, Ferrari, and Ford mixing it with the new BMW M8 LM GTE race car. Except that the BMW had been altered in the image to appear about four-times the size of its rival cars.

To be honest, watching the race in real time, sometimes it felt as if the racing Eights were really that elephantine compared to their rivals. Racing cars are supposed to be slim of hip and minimal of mass, yet here was the M8 GTE looking as if someone had driven a limousine to the track, stuck some stickers on it, and gone racing. The last laugh was on the meme-makers, of course. Big it may be, but the M8 is a fast racing car, and capable of mixing it with the lightest and best of the opposition.

Parked on the street outside my house, my first thought of the 8 Series was to wonder just how they get it down to racing weight. It’s a seriously large car, breaking the measuring tape at 4.8 long, low metres, with a beam of 1.9m. It looks even bigger than that, subjectively, with that aggressive, snarling snout (featuring the slimmest headlights of any BMW production model, apparently) tapering back to an elongated tail. I have to admit that, from photos, I had thought the 8 Series was not half handsome enough. Here in front of me, in the flesh as it were, I’ve revised that opinion. Especially in the Barcelona Blue paint job of our test car, it’s seriously good-looking.

The 8 Series sits halfway along a sports GT continuum that has the Mercedes-Benz S-Class Coupe (comfy, comfy) at one end and the Porsche 911 (pointy, pointy) at the other

Seriously heavy, though. This is an 840d, so there’s a big six-cylinder diesel donkey doing driving duties up there in the nose, and combined with four-wheel xDrive and an eight-speed automatic gearbox, that makes for a chunky kerb weight of about 1,900kg (and that’s in spite of BMW lavishing it with lightweight carbon-fibre construction techniques). Sit me in it, and we’re over the two-tonne mark. That’s a lot for a supposed sports car.

Then again, is the 8 Series really a sports car? In spite of its racing prowess, it’s more of a comfy GT, albeit one that can be cornered with some enthusiasm. In that sense, philosophically speaking, it sits roughly halfway along a sports GT continuum that has the Mercedes-Benz S-Class Coupe (comfy, comfy) at one end and the Porsche 911 (pointy, pointy) at the other. The 8 Series tries to combine the comfort of the Merc with the agility of the Porsche but doesn’t quite pull it off.

It really majors on long-distance comfort. It’s long way down into those brown leather armchairs in the front of the cabin, but once you’ve made the drop, their sumptuous comfort just envelops you. You sit low and stretched out in front of a dashboard of dazzling quality. Yes, you can have the new all-digital instrument pack, and the big central screen (with its seventh-generation iDrive software) in lesser, more affordable BMWs, but the 8 Series still has some fairy-dust cabin magic. Quality levels exceed any scale you could use for measurement, and the tactile qualities of the switches and buttons – which even extends to a knurled aluminium finish for the iDrive click-and-twist controller – are just delightful.

Thumb the starter button and the big-six diesel awakes. BMW plays some canny tricks with noise cancelling and feeding (convincing) fake engine noises through the Harmon-Kardon stereo, so refinement and smoothness can be taken as given. The 3.0-litre engine gets twin sequential turbos (one for low rpm response, one for high rpm power) and develops 320hp with 680Nm of torque. Which doesn’t sound like quite enough, given the weight issue, but at low-to-middling speeds, the 840d responds like a racehorse given a hefty kick up the bum.

The combination of big torque and four-wheel-drive traction means that you can burn through to 100km/h in less than five seconds, and the speed and power just seem to keep piling on as you keep your foot pinned. It’s a bit of a torque-fed illusion, though. As the speeds rise, so the diesel’s urge diminishes, and even accelerating to Irish motorway speeds reveals that the big engine doesn’t have a heart quite big enough to match the 8’s aggressive styling. Even with all that tech, it just runs out of puff eventually.

Still, you can carry big speed through corners should you choose. The 840d gets lightweight, aluminium double-wishbone front suspension, and complex five-link gubbins at the back, and as well as the xDrive all-wheel drive, there are big 20-inch wheels wrapped in Michelin tyres to transmit power to tarmac, and to keep the 8 stuck to the same. And yet, there’s a tinge of disappointment here too. The 840d is fast, and sure footed, but you can really feel the suspension struggling, at times, to manage the mass in your direction of choosing. The 840d’s sheer weight can only be partially compensated for by clever suspension. Or, to put it in a more Star Trekky manner; you cannae change the laws of physics, captain.

Within the confines of a small rock jutting out of the north Atlantic, there’s just never enough road to put in front of the 840d

Relax a little, put the engine, gearbox, and suspension into Adaptive mode, and the 840d is a car out of which you’d never want to get (and nor will you need too – it easily averages better than 40mpg). It’s so comfortable, refined, effortless. Within the confines of a small rock jutting out of the north Atlantic, there’s just never enough road to put in front of the 840d. You just want to find farther-flung locations to which to drive.

It’s just not a big ball of fun, is the only problem. I reckon that a future variant, one with the lighter 40i six-cylinder petrol engine, and weight-saving rear-wheel drive, may yet prove to be the sweet spot of the 8 Series range. For now, though, the lighter, more agile, more engaging Porsche 911 remains the benchmark here, no matter how big the 8 Series looms in its mirrors.