Saloon will top new Corolla Hybrid sales, but you should buy the estate

The estate is quieter, more conservative, less threatening. Traditional Corolla buyers will love it, and that’s probably the point 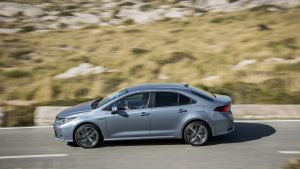 The Irish car market is a very different beast from once it was. Our top-two selling cars right now are both pricey SUVs, not the more affordable hatchbacks nor saloons which once populated our driveways and roadways. Electric power, albeit still a minority interest, is on the rise. We’ve swung towards and back away from diesel like a chimp on a rope. Some things do not change, and you can delete or append happily so as you please – the four-door Corolla saloon will be the best-selling version of Toyota’s new line-up in Ireland.

Should that come as a surprise? It comes, perhaps, as a slight disappointment. Toyota has seriously pushed the boat out when it comes to the styling of the new Corolla hatchback – it’s given the car an aggressive, narrow-headlight, ground-hugging stance that looks surprisingly mean and moody when one looms up in your rear-view mirror.

The four-door, officially a saloon in Toyota parlance, looks far, far quieter. There has been a trend, of late, that four-door versions of five-door hatchbacks have been the better looking cars, but the Corolla stops that dead in its tracks. It’s sure not ugly, but the subtle alterations to the lights, grille, bumpers and that big steamer-trunk of a boot slung out the back throw a restrictive line over the prow of that pushed-out boat. It’s quieter, more conservative, less threatening. Traditional Corolla buyers will love it, and that’s probably the point.

In fact, so traditional is the Corolla saloon that you will actually be able to buy one with a naturally-aspirated 1.6-litre petrol engine. A car for the true technophobe, Toyota perhaps not surprisingly didn’t supply us with one of those to drive, not least because the big news is that the Corolla saloon now comes with hybrid power.

It’s the same 1.8-litre engine, running on the fuel-saving Atkinson combustion cycle, as you’ll find in the Prius and the C-HR crossover. Same technically conservative nickel batteries under the back seat, instead of more faddish lithium-ion. Same CVT automatic transmission, which is as efficient as ever, and slightly less maddening than before – Toyota’s attention to quelling engine noise has worked well, and so the high-rev bellow of the engine intrudes less on your sanity when you’re accelerating hard.

The biggest change of all is that you might actually want to accelerate hard, as the new Corolla is actually – wait for it – engaging to drive. I’m not sure I’d describe it as out-and-out sporty, but this relatively humble four-door saloon took to the twisting roads of Majorca like an aquatic fowl to a lake.

The steering feels similar to that of the C-HR; well-weighted and rewarding, while the expensive double wishbone rear suspension (not standard on rivals like the Focus, Golf, i30 et al) means that the Corolla displays genuine poise as you twist and turn between the hedges and the Armco barriers. It’s actually fun.

Economy is decent too. In spite of our cornering enthusiasm, our test Corolla averaged 5.2 litres per 100km, which is 54mpg, which is better than good, and you would probably do better if you drove a little more gently than we did. WLTP-compliant emissions of 100g/km look pretty future-proofed too.

It’s a touch noisy – too much tyre roar on motorways – and a little bit small in the back. Even though the saloon sits on a longer (2,700mm) wheelbase compared to the hatchback, rear accommodation is a touch tight, especially for headroom, so those trading out of a now-defunct Avensis might be a little disappointed. The 471-litre boot makes it 110 litres more practical than the hatchback Corolla, though, and the interior has the same neat, logical, pleasing layout; the same big touchscreen; the same exceptionally comfortable seats, which aid and abet the smooth ride quality.

For all those strengths, you should buy the estate. It retains the hatchback’s more aggressive styling at the front, while from behind, it looks closer to a Lexus in styling terms – all narrow lamps and carefully sculpted surfaces. The boot, at 598 litres, is more useful even than that of a RAV4’s, it has the same cabin, and the same athletic responses built into the steering and the chassis. It’s a very, very accomplished car. Which none of you will buy. But which you really should do.

Verdict: You’ll all buy a saloon, but the estate is the best of the bunch.