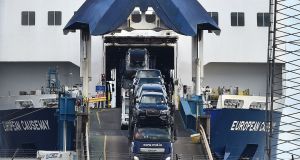 The ‘rule of origin’ provision in the new post-Brexit deal means that if 60 per cent of a car’s value originates in the UK, you can import it without paying the customs duty. Photograph: Getty Images

Somewhat against the run of play, the number of used cars being imported in January of this year actually increased. It was only a small rise – just 3.1 per cent, or an extra 202 vehicles – but as all but a handful of imported used cars come from the UK, it was a surprise.

Pandemic aside, the final cutting of the UK’s umbilical cord from the EU means there are now extra charges to pay when importing a car into Ireland. There is 10 per cent customs duty now, although that does not apply to all vehicles. The “rule of origin” provision in the new post-Brexit deal means that if 60 per cent of a car’s value originates in the UK, you can import it without paying the customs duty, but figuring out which car qualifies and which does not is byzantine at best.

The biggest charge, though, is the 21 per cent VAT that now must be paid, regardless of the age and mileage of the car being imported. Previously, VAT was only levied on new, or at least nearly new, imported cars.

That extra charge, combined with Ireland’s January 1st changeover to assessing a car’s CO2 emissions (and therefore its liability for vehicle registration tax, or VRT) to the tougher WLTP official emissions test, should have meant that imports would have been flatter than week-old cola. Yet here we have a 3.1 per cent increase. Why?

“We think it’s a blip, a backlog from cars that were imported in December, plus a few that have been brought in by dealers who want to test the new system,” Tom Cullen, the director-general of the Society of the Irish Motor Industry, or Simi, told The Irish Times. “We had seen a lot of dealers buying in a lot of used stock from abroad through December, and you’re seeing that coming through in registrations now. Some are almost buying cars from the UK as a learning exercise, to get their heads around the new system.”

Cullen thinks that we’ll see a marked decline in imports during the course of the full year, falling from a high of 113,000 imported used cars in 2019. Even with Covid-19 ravaging car sales last year, and the introduction in January 2020 of the levy tax on NOx emissions (which effectively made it uneconomical to import older diesel models), imports held up at 79,000 cars in 2020, and had been increasing again towards the end of the year.

According to Cullen, the combination of the new costs associated with Brexit, and the slight hardening in value of sterling against the euro, will put buyers off this year. “Anything over four years old is just not going to be economical to import,” says Cullen. “Maybe some premium vehicles will be, though – cars that cost in and around €60,000 to €70,000.”

To an extent, that tracks with what cars were actually imported in January. BMW, Audi and Mercedes-Benz models made up a significant proportion of imported cars. Then again, the list was topped by the Ford Focus, narrowly ahead of the Volkswagen Golf, so clearly some “regular” car buyers continue to see better value, better choice, or both in the UK market.

Of course, many Irish car dealers rely on the UK market for second-hand stock, especially given the overall falls in new car sales in Ireland in the past five years. Where will these dealers now find cars? And will the increased costs associated with imports drive up used-car prices here, just as cheap UK imports have been driving them down since 2016?

“There has already been a hardening of used values during 2020, and our outlook is that this will continue in 2021 and beyond,” Michael Rochford, managing director of the vehicle-history experts Motorcheck, told The Irish Times.

“There have not been many outlets for the spending of disposable income over the past 12 months. However, it is expected that local restrictions will begin to loosen slowly in the second quarter of this year. Therefore we expect there to be both an increase in demand and the release of a certain amount of pent-up demand in the new and used car market. However, with the supply of used stock from the UK being curtailed, this will lead to an excess of demand over supply and a hardening of used prices.

“In addition to the increase in VRT costs on the 1st of January, there is still a lot of confusion about import duties and VAT on the importation of a used car from the UK and the difference in rules between Northern Ireland and Great Britain. This confusion even extends to the motor trade, so it is to be expected that these changes will put the brakes on the rate of used imports for the time being,” says Rochford.

Ah yes, Northern Ireland. In theory, as things stand, if you import a used car from the North, you will not pay the 10 per cent import duty, and you’ll only pay VAT if the car is less than six months old or has less than 6,000km on its odometer.

There has not, yet, been a flood of imports from the North, and the thinking within the motor trade in the Republic is that this is because the bigger dealers are holding off and waiting for clarity on the regulations, not to mention the easing of Covid-19 restrictions. However, The Irish Times did speak on background to one UK import specialist, based in London, who said that they would be interested in setting up an office in Belfast specialising in dealing with customers south of the Border.

In the meantime, Northern Irish dealers are preparing for an influx of customers from “down south” once the current restrictions are relaxed. “We’re seeing an increase of about 10 to 15 per cent in terms of online inquiries from customers in the Republic of Ireland,” Jeff McCartney, group operations director for Charles Hurst, tells The Irish Times.

“Now, obviously, that has not yet translated into sales, but once the restrictions are relaxed, we expect to see a significant increase in sales. We’ve been told by some of our regular customers who cannot travel up to buy from us right now that as soon as they can do they will do.”

On concerns that Revenue might attempt to levy VAT on used cars coming across the border, if they suspect that the car has been only temporarily brought to the North, McCartney said that the wording of the regulation is clear – that the vehicle has to be registered to an individual or business in Northern Ireland, or sold by a motor dealer with an address in Northern Ireland.

Another issue is parts, as many of those will now have to cross the Irish Sea border. So far, two of Ireland’s biggest car operations, Toyota Ireland and Ford Ireland, have reported no issues.

Toyota says that it does not source spare or replacement parts from the UK so is unaffected. Ford said that some initial delays were experienced but it expects to be back to next-day delivery for parts very soon.

While prices for parts have not yet increased, Ford says that it is monitoring prices carefully, as “there could be some down the line”. Simi has suggested that bonded warehouses could be utilised in cases where parts would attract excessive taxes for crossing the UK border.