Some gripes remain, but the Model 3 is a strong EV all-rounder that is well ahead of it rivals

The Model 3 has few peers with regard to electric motor performance and range, where other manufacturers are still playing catch-up. The interior is neat and tidy, with many functions accessed through a large touch-screen. Video: Neil Briscoe 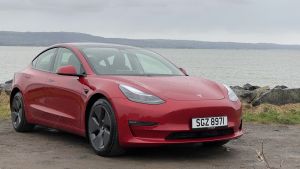 Tesla Model 3 Long Range: some quality concerns remain, but this is right at the sharp end of electric motoring

Road testing cars gets a touch monotonous in lockdown, especially when you’re trying to figure out if a Tesla Model 3 Long Range, just updated with a heat pump to warm the cabin, and with an extra 20km of range on the WLTP test, lives up to its battery billing.

Shall I skip to the end? Okay, so. The Tesla Model 3 Long Range’s 78kWh battery remains a paragon of electric motoring, and even if 10km mysteriously disappeared from my “distance remaining” readout during my laps of the block, then I could possibly put that down to excessive use of the heated seat as it was cold out. I can tell you that on this close-to-zero, and abidingly wet, day the cabin heater sprang mercifully, briskly into life, so that new heat pump is clearly doing its job.

What’s also doing its job is the way the Tesla manages its battery use. While the Californian start-up may still have a way to go when it comes to build quality, and its boss’s habit of promising things he can’t deliver (we still aren’t on Mars, are we Elon?) the fact is that Tesla’s batteries and motors are ahead of the game.

Just as it seemed that rivals from the likes of Volkswagen, BMW and Audi were catching up, Tesla goes and adds that extra 20km of range to the Model 3, giving it a WLTP-rated one-charge range of 580km. Based on my use, you’d get a realistic 510km, even using some motorway and mountain road. That’s not just best in class, that’s a class of its own. Most other carmakers struggle to get past the 500km mark on the WLTP test.

I know – there’s a theory, and a solid theory at that, which says that you don’t need all that range, and that most people only drive for short bursts of about 15km on each journey.

But that’s not the point. The point is that the Model 3 makes electric motoring painless. I am one of the 36 per cent estimated by the Sustainable Energy Authority of Ireland to have no off-street parking, and therefore no ability to charge an electric car at home, overnight. That is, according to all the experts, the best way to use your electric car.

Well, I can’t. If I need juice, I have to tramp to one of the precious handful of 50kWh “fast” chargers in my area, which usually means (a) spending time in a rancid retail park while I charge, and (b) that time being 10 or 11 o’clock at night, because that’s the only time the charger is free.

With the Model 3, I haven’t had to do that. Thanks to a combination of lockdown-restricted mileage and the sheer depth of range, I haven’t actually needed to charge at all. I did give it a short boost from a slow AC charger at one point, just for safety, but I needed have bothered.

A bit like Ferrari when it was still run by Ferrari, there’s a general feeling that when you buy a Tesla, you pay for the engine (or in this case the batteries and motors), and the rest of the car comes free. That’s a feeling underlined by Tesla’s generally poor performance in reliability surveys, by Musk’s appearance on YouTube this week to, essentially, say “don’t buy one of my cars until we’ve worked the bugs out”, and by a current recall for touchscreens that go dark, unexpectedly.

All I can say is that this Model 3 felt better built than the last one I drove, about 18 months ago. This time the panel gaps were a little neater. The paint could be better, but the cabin quality, odd-feeling steering wheel aside, is decent. The giant screen in the centre looks cool, but I have concerns about what happens if it goes on the blink – the only thing it doesn’t control are the wipers, indicators, and gear selection, and Musk seems intent, with the latest update for the Model X and Model S, to get rid of even those simple, reliable, mechanical controls. Not sure how that’s going to work out.

The rest is good. The seats have improved, the strip of wood behind the screen and wheel brightens and warms the cabin, and space is good. I also love the “frunk” boot under the nose, if nothing else than for the looks from passers-by when they see you opening your bonnet to stash a bag of shopping.

To drive? Well, it’s fine. Decent, even. Certainly, the Model 3 feels far better balanced, and has more natural poise than Tesla’s larger cars. The two-motor layout, with four-wheel drive, makes mincemeat of the streaming wet conditions most of our test took place in, and performance is truly exceptional.

This is not the full-on Performance model, but a 0-100km/h of 4.4 seconds is still hugely impressive, and the instant-on torque from standstill is strong enough to actually make you feel a little queasy.

Problems? The steering feel is inconsistent and rubbery, and the ride is too firm. It also lacks the fluency and engagement of a BMW 3 Series or Mercedes C-Class, but perhaps by not quite so broad a margin as you might expect.

There is a niggling worry, though. According to current figures, Tesla is the most valuable carmaker in the world, and indeed one of the most valuable companies full stop. Yet rival Volkswagen, at current income levels, makes $537,964 (€443,335) per minute, compared to Tesla’s €82,000 (with thanks to the automotive journalist Michael Taylor for digging that figure up).

For now, though, the Model 3 remains at the cutting edge of both the cultural zeitgeist and electric motoring. It’s deeply impressive in so many ways, mildly worrying in a few, but still (still!) without a single direct, head-on rival two years from launch, and still one of the cars that make the switch to electric so much easier. Musk may be divisive, but his cars are increasingly less so.