GR Yaris: Toyota’s pocket-rocket rally car is a star in the making

€50,000 price tag may seem steep, but it’s not outlandish given what the car delivers 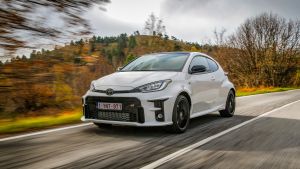 It’s the sort of question that could be asked of politicians to test their grip on reality before holding positions of power. How much is a litre of milk? Or a loaf of bread? How much should you reasonably spend on a Yaris?

And yet with the Toyota question at least, the answer may not be clearcut.

In general it’s insane to spend €50,000 on a supermini. Who cares that it has lightweight forged alloys and four-wheel drive? And it might have a few “GR” badges, but they mean nothing to the masses: the moniker that matters is Toyota Yaris and if the neighbours find out what you spent on this car they’ll be forwarding you emails from exiled Nigerian princes and suggesting you invest in their cousin’s holiday timeshare scheme in Myanmar.

Yet, clearly this is not ordinary Yaris.

When Akio Toyoda announced a shift in ethos at his family’s car brand – “no more boring cars” – we all took it to mean there was a coupe on the way. Sure enough the GT86 arrived. But there’s a cavernous gap between boring and brilliant. The GT as more hmm than holy God. Then the Supra arrived and that seemed to be the epitome of what he meant, even if it wasn’t quite the sensation some had hoped.

Few of us thought the real finale to Akio’s new approach would come in the form of a supermini. And one that, when put in the context of the rally-derived cars in whose tracks it follows, is relatively good value: even at €50,000.

The secret to this incredible car is homologation. No, it has nothing to do with Louis Pasteur, but rather the requirements laid down decades ago by the grand poobahs of rallying. There demanded that any car firm wishing to compete needed to build a set number of road cars bearing agreed similarities to the one they were going to enter in the race. What those similarities were changed with time, but the principle remained the same.

The rules were changed in the mid-1990s to get more brands to compete in rallying. Cars only had to bear some resemblance to the road-going models. Yet that in itself has proved tricky for some. And when Toyota decided the new Yaris was going to be a spacious five-door family supermini, it seemed to rule out any attempt to shoehorn the model into the motorsport.

This is where Akio’s message proves to have more depth than just marketing spin. In a move that would have been hard to make in any car company unless you are a scion of the founding family, he signed off on the project.

To match its planned World Rally Championship entrant with a road-going model meant a new bodyshell sitting on a unique platform.

So the GR gets its own three-door format with a lower, tapering roofline. Indeed the roof itself is forged carbon composite, while the GR boasts aluminium body panels. All with the aim of reducing weight. The platform is a combination of the latest Yaris underpinning, but combined with a rear section adapted from the larger platform that forms the basis for the Corolla and C-HR.

Unsurprisingly, the engine is all new as well, claiming to be the world’s most powerful three-cylinder and also the smallest and lightest 1.6-litre turbo out there. Most important of all, it meets the WRC technical regulations.

As you can see, the GR Yaris and the hybrid superminis in Toyota showrooms for €20,000 are not exactly identical twins. Cousins at best.

This GR Yaris delivers 257bhp from its 1.6-litre three-cylinder engine. That figure might not sound astounding these days, but you need to consider the power to kg delivery on this car. Weighing in at a total of 1,280kg, that means a ratio of 4.9kg per horsepower.

The decision to stop at 257bhp was one made by the engineers not the engine’s limitations. Aftermarket operations claim to have delivered 475bhp from the same engine by upgrading the turbo and a few other modifications. But it’s not needed, for what you look for in a car like this is not simply raw power: it’s about balance. In this regard, knowing when to stop is as important as being able to load on more power.

The beauty here is that this car dances on the line of lunacy, yet leaves the driver in control. Unlike the older road-going offshoots of the homologation rules, which were beasts to use as everyday cars, you can live with this Yaris, comfortably creeping along in traffic. At the same time, it’s a little monster off the starting line, hitting 100km/h in just 5.5 seconds.

Here again, kudos goes to the engineers: they didn’t overload it with software tech to achieve this. There’s no launch control here, no combination of pedal pushing and touchscreen taps to get the most out of this car. Simply point it in the right direction, start dancing on the clutch and accelerator and hold on.

The addition of its all-new four-wheel drive is a masterstroke. It conducts the torque-like Toscanini. Kick down and power is delivered without drama or wheelspin; just the whirr and wheeze of the turbo combined with the surprising growl of that three-cylinder engine. Again Akio’s backing meant there were no barriers to ambition: The new GR-FOUR system (what it calls the electronically controlled four-wheel-drive) is the first original sports all-wheel drive system Toyota has created in 20 years.

Three driving modes are offered, with different gear ratios for each, allowing different power distribution between front and rear: from 60:40 in normal default mode, 50:50 in track mode; and 30:70 in sport mode. Opt for the Circuit Pack and you get front and rear Torsen limited slip diffs for even sharper cornering and grip, along with retuned suspension, stiffer springs and anti-roll bars and adapted shock absorbers.

What all that ultimately means is a car that not only delivers straight line pace, but incredible cornering ability. On a wintery Sunday and mud-strewn back roads, this GR Yaris never put wheel out of step. The more corners rounded, the more confident it makes you feel about its ability to keep its pace through the bends.

And the beauty of these pocket rally rockets is that you feel all the more connected to the car, as if you could reach out and drag any of its wayward corners around the bend with you. Bikers talk about this sense of the bike becoming exoskeleton suit. At times the GR Yaris gets close to that.

You can’t ignore that price tag though. It’s a lot of cash for the three-door city car, regardless of its rally pedigree. And yet in the context of what it delivers, it’s actually not that outlandish.

Take a look at the prices being fetched by some past homologated models. Many fetch six-figure sums at auction 30 years after their rally equivalents last graced a muddy racetrack.

In this context the GR Yaris might even seem like a sound buy to a dedicated petrolhead. They might even be prepared to stomach the €600 annual motor tax.

For Toyota there has been Covid-sized sting in the tale of Toyota’s WRC plan, with the pandemic calling into question whether the rally car this road-going version was meant to homologate will ever race. The new car will not race in 2021 and next year WRC is set to go hybrid.

Perhaps then, that makes the GR Yaris even more storied. While many of the earlier cars were produced in extremely limited numbers compared to the 25,000 GR Yaris due to be built, it’s not beyond the bounds of possibility that this car will hold its value well if given some tender loving care along the way.

As we advance to the electric age, engineers are eager to offer up a last hurrah to mark the era when precisely-timed fossil-fuelled explosions pushed pistons that turned crankshafts in order to hurl a tonne of metal at the horizon. Cars like the GR Yaris are relatively affordable examples of what was achieved.