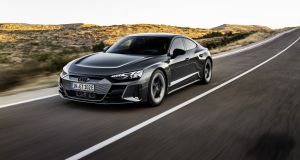 After what seems like a decade of teasing (actually it’s only been a few months, but everything feels like decades right now, doesn’t it?) Audi has fully revealed its riposte to the Tesla Model S. This is the e-Tron GT, and it’s the first time we’ve had a chance to see Audi’s 646hp electric car without camouflage.

Without that camo, it’s an incredibly aggressive-looking machine. The overall silhouette is very mush a mid-point between the A5 Sportback and the A7 Sportback, but the detailing is far more overtly sporting than you’d find on those cars.

In fact, if you squint a bit, the e-Tron GT looks more like a cross between an A7 and a TT coupe. It’s a wide car (1.96m across) which helps to make it look a little lower, and essentially uses the same chassis, battery, and electric motors as the Porsche Taycan. Audi claims that it has a lower centre of gravity than the mid-engined R8 supercar. Audi’s chief of design Marc Lichte calls it, “The most beautiful car I’ve ever drawn.”

In power terms, the e-Tron GT splits the difference between the two four-wheel-drive Porsche models. The Taycan 4S develops 523hp, while the mighty Taycan Turbo hits a ridiculous 751hp. The RS version of Audi’s e-Tron GT develops a “mere” 646hp, which is still enough to make it the most powerful road car Audi has yet produced. With RS power, it will sprint to 100km/h in 3.3 seconds.

There’s also a “regular” e-Tron GT model, which makes do with a Taycan 4S-matching 530hp. That will hit 100km/h in 4.1 seconds. Audi claims that both models “have high repeatability” for their acceleration times, which basically means that you can do lots of fast sprint times without the battery crying for help, although eventually heat build-up means that the car’s software will cut in to rein you back a little.

Both models get an 85kWh battery pack, which makes up the lower section of the car’s structure. Audi says is the first time it’s used a chassis or platform with a totally flat underside, to the benefit of aerodynamics. There’s a host of other aero tricks, including “air curtains” at the front – big vents in the bumper that deflect airflow outward and down the sides of the car – and aero-optimised wheels of up to 21-inch diameter.

Audi claims a WLTP range of 488km for the standard e-Tron GT, and 472km for the RS model. Both are well short of what you get from a Tesla Model S. Or, for that matter, a much cheaper Tesla Model 3 Long Range. That said, real-world experience with Porsche’s Taycan suggests that the actual range might be a fraction closer to 500km and Audi might be hedging its bets slightly with the claimed figures.

It should be fast to charge, too. There’s an 11kW on-board charging system, which will make the most of “slow” on-street AC chargers and home wallboxes, while the e-Tron GT can handle a maximum DC fast-charging speed of 270kW. Connect it to a fast enough charger (such as one of IONITY’s 350kW units) and Audi says that you can get it from five to 80 per cent charge in less than 25-minutes, or add 100km for every five minutes connected to the charger.

Audi also wants the e-Tron GT to be one of the first electric cars truly known and recognised for its driver involvement. With an electric motor at each end, the car’s power can be more or less infinitely varied from axle to axle, while there’s also “torque-vectoring” – the ability to juggle power between individual rear wheels, which adds to the car’s agility.

On top of that, there’s three-chamber air suspension, adaptive dampers, and a four-wheel steering system. Audi’s really throwing the handling and involvement kitchen sink at this car, and to underline the point, the e-Tron GT was shown pulling sideways drifts and “doughnuts” on a warehouse set for the car’s online debut. Not your normal electric car launch fare, that.

On the inside, you get the expected multiple screens and a heads-up display, but thankfully Audi has given the car actual, physical controls for the heating and air conditioning, which should make day-to-day driving rather less confusing. There’s also the option of a “vegan” leather-free interior, with seats made from material called “kaskade” which draws on recycled materials; for example polyester fibres that were made from old plastic bottles and textiles. Keep putting those milk cartons in the green bin, folks, or we’ll run out of Audi seats . . .

Irish sales will start in April, and Audi says that it’s aiming the car at “highly-demanding, performance-oriented, motoring enthusiasts”. Ones with big cheque books, presumably.

It’s worth pointing out that Tesla’s incoming Model S “Plaid +” which boasts 1,100hp and an 840km claimed range when it arrives in Ireland later this year, is currently listed with a price tag of €140,990 on Tesla’s Irish website.