DS 4 arrives to poach buyers from Mercedes and BMW 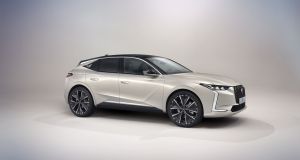 The new DS 4 car: the latest French assault on the German-dominated Matterhorn known as the premium car game

This is the new DS 4. Note, not Citroën DS 4 – DS has been a standalone brand since 2015, in spite of the fact that its greatest creation, the original 1955 DS, was very much a Citroën, and badged as such.

No, this new DS 4 is the latest French assault on the German-dominated Matterhorn known as the premium car game. In theory, everything about a French luxury car lines up. After all, France is the home of Hermés, Lancome, Chanel, Givenchy and a thousand other high-end brands, so France has the luxury end of things covered.

To those who point to German hegemony when it to comes to precision engineering, Francophones might politely point out that Germany had nothing to do with Concorde. Nor the Eiffel Tower, for that matter.

Yet, at almost every turn since the 1970s, the French automotive giants have stumbled and fallen in the face of the Troika that is BMW, Mercedes, and Audi. Which is why Citroën, and the powers-that-be at the former PSA Group (now the vast Stellantis conglomerate) decided to spin-off DS as a brand in itself. Divest itself of all those years of cheap, cheerful Citroëns, and Uncle Bryn driving a Xsara Picasso on Gavin & Stacey, went the theory, and DS will be better able to fight the Germans on equal terms.

Will it work? Well, Irish buyers won’t get a real chance to tell until the early months of 2022, which is when this new DS 4 will arrive on these shores. In the meantime, the importing of DS-branded models is shifting from the UK-owned IM Group, to the Irish-owned Gowan Group. Gowan has form in this area – it was, for many years, Ireland’s Citroën importer and with DS switching to Gowan from April of this year, it is all-but signed and delivered that Citroën will do the same, joining fellow Stellantis brands Opel and Peugeot in the Gowan fold.

Michael Dwan, Gowan Group managing director said: “We are delighted to be appointed as the DS National Importer for Ireland. Furthermore, we are well advanced in discussions with Automobiles Citroën with a view to becoming national importer for Citroën vehicles.

“Gowan Group has a rich history with Citroën in Ireland, having imported and sold the brand for 27 years in this country up to 2009. If discussions are successful and legal agreements and any relevant regulatory approvals are concluded, we will commence importation on 1st April 2021. We are committed to selling and servicing through the existing Citroën network of dealers and service providers.”

This year, the DS7 Crossback crossover will be re-launched onto the Irish market (it was first launched in 2019, until DS realised that it didn’t have any Irish dealers with the right fixtures and fittings in their premises) and the DS3 Crossback will make its belated market debut. The DS7 plays against the likes of an Audi Q5 or a BMW X3, while the DS3 is more up against the likes of a Mini Countryman.

Which means that while the DS people were very careful, at the DS 4’s socially-distant online unveiling, to avoid using the word “crossover” the DS 4 is just that, albeit it manages to successfully disguise its SUV aspirations with a body that looks much more like a posh hatch. A rather handsome one, at that, with crisp lines, bright LED light details, and from some angles, faint hints of Jaguar’s E-Pace.

Inside, there are multiple screens, of course – a big one for the instruments, another big one for the infotainment system, and a dinky little five-inch one on the console between the seats that acts as a multi-touch controller. Not sure how distracting that will be in use, but benefit of the doubt and all that…

The luxury brief seems to have been nailed rather well, with chunky leather seats that mimic the designs of high-end watch straps (such as, perhaps, Mont Blanc – another great French luxury brand) and flashes of chrome meant to evoke the sabres once wielded by French cavalry. There’s also a 690-Watt Focal Electra sound system, and an air purification system that actively protects the cockpit with sensors for PM2.5 particles.

In powertrain terms, though, the DS 4 already feels a step behind. It’s going to launch with a choice of petrol and diesel engines, and a 225hp plugin-hybrid with an electric range of some 50km (basically the same system that’s already on sale in the Peugeot 3008 and 508).

However, in spite of the E-Tense badging (which, on the smaller DS3 Crossback denotes an all-electric version), there’s no DS 4 that’s powered purely by batteries.

There may be, eventually – DS has promised to sell only plugin-hybrids and fully-electric models by 2025, so unless it wants only one version of the DS 4 on sale by then, it’ll have to make a battery-electric version. We shall see.

“DS 4 was conceived to redefine the outline of the Premium C segment. It’s aimed at customers attracted by two body shapes: the new aspirational Coupé-SUV and the traditional compact hatchback. At every stage of its design, the idea of appealing to these two segments drove our decisions,” said Marion David, product director of DS Automobiles at the car’s launch.

In one sense, the DS 4 can do no wrong – it’s effectively replacing both the old DS 4 and the DS 5, two of the most disappointing cars made with either Citroën chevrons or DS letters since 1919. It could hardly prove to be as poor as they. Up against the might of the German luxury car market hegemony, though? The DS 4, and DS in general, has its work cut out. Let’s hope that, in historical terms, it’s more of a de Gaulle than a Daladier.