What are the top-selling houses in Ireland in 2019?

Off-market sales were the order of the year in Dublin, as country prices were revised 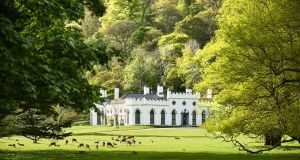 Luggala Estate, in Co Wicklow, looks to have been the top Irish property sale of 2019, changing hands for about €25 million. Photograph: Bryan O’Brien

This year saw some strong sales at the upper end of the market, although the pace of transactions could hardly be described as brisk. Here are the top residential property sales of 2019.

WHAT THE NUMBERS TELL US

In some quarters, price drops became the order of the day, as vendors realigned their expectations. This was particularly the case in Dublin 6, where Temple Road properties were forced to reevaluate, having stolen something of a march on the rest of the luxury market in previous years. It was also a year marked by quiet “off-market” sales, when opportunistic buyers – and sellers – transacted privately and emerged successful. Of the top five Dublin house sales this year, four were quietly brokered off market, with the remaining property pursuing the more usual route of sale through an estate agent.

The country homes market saw some major downward revisions in prices, particularly among premium properties that had been hanging around. Selling agents reported something of a flurry towards year end, when the big bad Brexit bogeyman was taken out of the equation – temporarily at least. Of the top country estate sales it’s worth noting that four were properties located in counties within easy commuting distance of the capital – Wicklow, Meath and Kildare. The returning expat market appears to be alive and well; less evident were the mega-rich on the lookout for sporting estates with earning potential in Europe. Here are the top sellers in more detail.

In Dublin the big surprise deal was the quiet sale of Auburn House the Malahide home of Mary McEvaddy, the former wife of aviation tycoon Ulick McEvaddy which sold to a British developer, Hollybrook, for a substantial undisclosed sum. A September entry in the residential property price register (PPR) for the estate, which sits on 11 hectares (27 acres), indicates €6 million was paid, but this figure represented the price paid only for the main house and up to an acre of land. Based on recent surrounding land sales, the full price paid for Auburn House and its remaining 26 acres could amount to around €20.7million (not including the value of the main house on an acre). Clearly Hollybrook has plans to develop the estate, but they will be required to retain the protected and architecturally significant Auburn House on substantial grounds and woodland. Under the terms of the deal, it is understood that McEvaddy entered into a licence agreement giving her an option to remain in residence at the estate for an undisclosed period of time after the sale.

The off-market sales continued when 49 Ailesbury Road changed hands in April for €6.75 million. The semi-detached period home with sprawling landscaped gardens and a tennis court was owned by the Crowe family for decades. Financier Dermot Desmond’s Celtic Trustees, an Isle of Man-based trust established for the Desmond family, acquired number 51 next door in 2015 for €5.75 million. Now it has emerged as the new owner of number 49 following a chance dinner meeting between associates of the next-door neighbours earlier this year. The acquisition makes strategic sense if money is no object because the L-shaped garden of number 49 wraps around that of number 51. Extensive work is already under way at number 51 but the rear access is poor so number 49 is proving handy for access to number 51 too.

Next up is number 46 Ellerslie, on Darty’s Temple Road, which appeared sold for €6.25 million in September. Solicitor Paul and property developer Fiona Hanby had lived there for 27 years before placing the fine Victorian for sale seeking €5.9m in 2017 and downsizing to an apartment. While the property is registered as sold, no change of ownership has been registered and the entry on the PPR may reflect a private transfer of ownership.

The fourth biggest residential sale of the year took place in Killiney, when Strawberry Hill on Vico Road sold for €5.5million. The 702sq m (7,560sq ft) coastal Victorian property was placed on the market in 2016 by its architect owner David Murphy, seeking €6.5 million, but it failed to sell and was subsequently removed from the market late last year. In late summer the deal was finally completed off-market through selling agent Vincent Finnegan to a UK-based expat buyer. The transaction has yet to appear on the PPR but it is understood the new owners have taken up residence.

Coming in at number five is the more straightforward market sale of Redwood on Avoca Avenue, which went on the market with Simon Ensor of Sherry FitzGerald in early May seeking €5.5million. Within about two months this gorgeous 530sq m (5,704 sq ft) double-fronted Victorian on an acre had sold to a Dublin-based family for €5.2million.

Additional noteworthy residential sales in Dublin include those of Howth Castle and Grey Gables in Sandymount. Both transactions appeared on the PPR in May and April for €3.5 million and €5.425 million respectively, but both are significant sites destined for substantial redevelopment. Howth Castle and demesne on 350 acres was sold in October 2018 by the Gaisford-St Lawrence family to Tetrarch Capital for an undisclosed sum. The entry in the PPR refers solely to the value of the castle on one acre. Tetrarch plans to redevelop the landmark Dublin site as a luxury destination, and to transform the golf courses.

The sale for €5.425 million of Grey Gables on Sandymount Castle Park off Gilford Road, refers to a modest detached property, Grey Gates, on a 1.26 acre site with planning permission for 25 homes that sold for around €7 million in May.

The sale of the former Guinness-owned estate on 5,000 acres in Luggala, Co Wicklow had been closely watched from the moment it was placed on the market seeking €28 million in 2017. One of Ireland’s most historic and mystical estates, it was home to the late Guinness heir and founder of Claddagh Records Garech Browne who lived there until his death in March 2018. The sale through joint agents Sotheby’s International Realty and Crawford’s prompted calls for the State to intervene and acquire at least some of the lands for recreational use.

In late October a value attaching to the house of €11.585 million appeared on the PPR, with the entire value of the transaction variously reported as somewhere between €20 million and €28 million. The final deal included a substantial portion of the house contents bringing the total sum paid along with the lands close to €25 million.

Fittingly enough the identity of Luggala’s buyer brought with it a certain mystique when it was revealed that the property was purchased by a reclusive Italian count Luca Rinaldo Contardo Padulli di Vighignolo and his American wife, Carolyn Dolgenos. Count Padulli di Vighignolo is believed to be one of Britain’s wealthiest individuals. He owns thousands of acres of land in Norfolk, England.

The next biggest country sale has not yet featured on the PPR, though contracts exchanged in November. Dollanstown Stud, a restored Georgian House on 365 acres in Kilcock, Co Meath was purchased by property developer Luke Comer, who said he paid just under the final €7.5 million asking price. Owned by a Swedish businessman since the 1980s the 8,400sq ft property with a world-class event riding and training facility, was sold through joint agents Savills and Sotheby’s International Realty. When it was placed on the market in 2018 it had originally sought €9.25 million.

A stunning coastal west Cork property quietly took third ranking when it popped up on the PPR as having sold for €5.732 million in February. Kilfinnan Castle on 25 acres in Glandore enjoys some of the finest views in the region and had been carefully restored by the late businessman Bernard McNicholas, the former owner of London-based firm McNicholas Engineering, who bought it as a dilapidated ruin. It was sold off market through agent Charles McCarthy who declined to comment on the sale but the buyer was reported at the time to be a UK businessman.

When Kilfrush Stud on 286 acres came on the market in June, the rural Co Limerick estate was hailed for its limestone enriched land and champion breeding success. When it went for auction in July through Paddy Jordan of Jordan Town & Country estate agents the guide price was set at €5.5million but failed to sell on the day. It sold soon after for an undisclosed sum to a Dubai-based buyer who plans to continue to operate Kilfrush as a stud. The price for the entire has yet to appear on the property price register, though the new owner is in situ and th sum paid is understood to be around €5million.

Fortgranite House, a Wicklow estate on 341 acres brought with it a rich 300 year history when it launched in May 2018. In the end the greatest appeal of the 17th century house with 85 acres of parkland was most likely its substantial dairy farming land. The eventual buyer turned out to be none other than property developer Luke Comer - buyer of Dollanstown Stud above - who has by now accumulated vast tracts of land around Meath, Kildare and Wicklow. It is understood Comer paid  €3 million for Fortgranite.