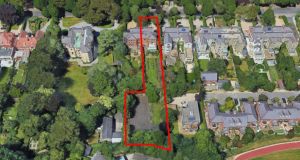 Ailesbury Road: No 49, which sold for €6.75 million, adjoins No 51, already owned by Celtic Trustees

A house on Ailesbury Road in south Dublin has quietly traded hands for €6.75 million, according to the property-price register, making it the second-biggest home sale of the year in the capital, after that of Auburn House in Malahide, in north Co Dublin.

No 49 Ailesbury Road, a substantial semidetached period home, was owned by the Crowe family for decades until its recent off-market sale to an undisclosed buyer. The Dublin 4 property features a particularly large south-facing L-shaped site of about 0.6ac, with sprawling landscaped gardens and a tennis court.

It adjoins 51 Ailesbury Road, which is owned by Dermot Desmond’s Celtic Trustees, an Isle of Man-based trust that the billionaire financier reportedly established for the benefit of his children, which has been particularly acquisitive in this expensive area in recent years.

Celtic Trustees acquired number 51 in 2015 for €5.75 million. This property is undergoing major construction works, following planning permission being granted to the trust last year to refurbish and extend it.

Now it is understood that Celtic Trustees has purchased number 49 after a chance dinner meeting between associates of the next-door neighbours earlier this year.

Although the Land Registry does not yet record details about the change in ownership of No 49, the site is a hive of activity, with builders entering and exiting the rear garden through the property’s detached garage.

The Desmond property at No 51 has restricted access, as the house occupies the entire width of the site, with a garden-level passageway providing very limited access to the rear garden. No 49 has much better access because of its large side entrance, which would facilitate structural improvements on both sites.

Aside from Ailesbury Road, the Desmond trust also spent €14.25 million in 2016 for Walford on Shrewsbury Road, where construction of a mansion intended as a home for Desmond is in full swing. The family’s long-time Irish base is Alillu, an expansive detached property standing on nearly 1ac of grounds at 89 Ailesbury Road.