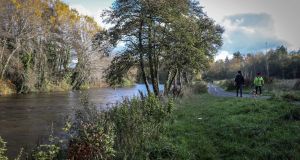 Riverside walk along the Liffey in Chapelizod. Photograph: Crispin Rodwell

Most people who live in “Chapo” come for the proximity to the city centre and Phoenix Park on the doorstep, and stay for the quietude and the inimitable community spirit. Often eclipsed by trendier spots like Stoneybatter or Kilmainham (or more bouji Castleknock at its other end), Chapelizod is genuinely deserving of its reputation as Dublin’s best-kept secret. A walkway to the Irish National War Memorial Gardens is another big advantage.

Says Gráinne Walsh, who has lived in the village for nearly 20 years: “I can never see myself leaving. It’s a combination of the people and the handy location. It’s 10 minutes into town on the bus, but it has that rural village feel that you can’t really put your finger on. There’s little in terms of anti-social behaviour – we have a Garda Clinic every so often, but hardly anyone goes. Everyone says hello walking down the street, which makes it feel really welcoming. Most of the people living here just get it.”

The main thoroughfare is where most of the action is, and there is certainly room for more amenities in the area. Locals have to travel out of the area to Castleknock or Ballyfermot for a supermarket shop (although there is a well-stocked Spar on the main drag). Traffic is another bugbear, as is a lack of parking; in rush hour, you take your life into your hands driving up Knockmaroon Hill. Commuters often get a short straw, too. By the time the buses arrive in Chapelizod from their starting points, many of them are full at peak times.

A Chapelizod apartment is a sound bargain: try this roomy two-story apartment at 59 King’s Hall (€265,000, via Berkeley & Associates). With two decent-sized bedrooms, it could use a touch of modernisation but is well positioned in the village.

New Row is a gorgeous lane of houses, and Number 9, with two bedrooms and a compact 50 square metres of living space, needs little in the way of tweaking (€315,000, via Sherry Fitzgerald). At the time of going to press 40 Martins Row is the only three-bedroomed property on the market in the area (€380,000, via City Homes), and is perfectly well-presented and waiting for someone to put their stamp on it.

Chapelizod has a particularly settled community, so good luck trying to secure one of the village’s particularly pretty houses (53 per cent of the housing stock in Chapelizod is made up of apartments, according to MyHome.ie research). Still, apartments come onto the rental market from time to time. Expect to pay anything from €1,650 to €1,900 for a two-bedroomed apartment located centrally within the village.

The Villager (31 Main Street) has long been the village’s linchpin pub, and its small outdoor area is a great spot in the summer. Similarly, Wrights Angler’s Rest, at the top of Knockmaroon Hill, feels like the middle of the countryside and is perfect when the weather is great (a turf fire inside is pretty perfect in the winter, too). The Bridge Bar & Eatery (1 St Laurence’s Road) is run by Union 8’s Padraig McLoughlin and is a very welcome addition to the village. Baa Baa (30 Main Street) has just opened this summer by the folks who run Black Sheep catering and is an adorable foodie spot that locals describe as a true godsend.

Larger/older families often outgrow Chapelizod’s apartments and small houses, and then move on to larger estates.

The Donore Harriers running club and the mix of rowing clubs by the Liffey aside, Chapelizod lacks playgrounds and social amenities for little ones. Still, there is the Phoenix Park and the War Memorial Gardens right on the doorstep; the ultimate in kid-friendly green spaces.

Alternatively, the M50 is next to the village, and if you can spare 50 minutes, it’s a scenic walk into town through the Phoenix Park.

“The defining feature of living in Chapelizod is its distinguishable sense of community. It’s a village in the truest sense and is centred around a recently refurbished Main Street. There were a number of derelict buildings that are now predominantly owner occupied, and it’s brought a renewed sense of pride to the village. It is a complete privilege to live against the Phoenix Park and to literally straddle the river Liffey. There are more young families now as well.

The great challenge of living in Chapelizod is the bus service, with huge numbers [travelling] at peak times. Car parking is also very much at a premium!” – Matt Lunson, musician

Do you live in Sallins, Co Kildare? If so, let us know what it’s like to live there. Please email homeanddesign@irishtimes.com