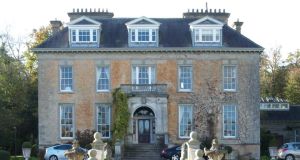 The Malahide home of Mary McEvaddy, the former wife of the aviation tycoon Ulick McEvaddy, has been sold to a British developer, Hollybrook, for a substantial undisclosed sum.

An entry in the residential property price register for Auburn House estate, which sits on 11 hectares (27 acres), indicates €6 million was paid, but this figure represents the price paid solely for the main house and up to an acre of lands. An additional undisclosed sum was paid for the remainder of the site and houses.

The final price paid for Auburn House is likely to be one of the highest value – if not the highest value – Dublin home transactions of the year, and certainly the most expensive house sold in north Dublin since the property market collapsed in 2007. The total sum, understood to be “a multiple” of the price paid for the house, reflects both the quality of the estate lands and their evident redevelopment potential.

Hollybrook, the development company owned by UK-based Mick Cox, has most likely been targeting the prized property for years and has acquired multiple adjoining sites in the meantime. In 2017, the company acquired a 1.64 hectare (4.05 acre) site on Streamstown Lane from the defunct Walsh Maguire construction empire. Last year, on the Dublin Road, it acquired a house on 2.12 hectares (5.23 acres) named Little Auburn, which was advertised for sale seeking €4.25 million (the house on an acre registered as sold for €1m). If the full asking price was achieved it values the lands at about €78,000 per acre, which when applied to 26 acres at Auburn House amounts to €20.7million (not including the value of the main house on an acre).

Planners are likely to insist that Hollybrook retains substantial grounds to protect Auburn House, its curtilage and mature surrounding woodlands, but the developer seems to have scope to redevelop parts of the lands it has assembled. Under the current development plan, a density cap of just 10 houses per hectare is being enforced on the site. Those constraints would allow it to opt for a top-end development, not dissimilar to the luxury Abington scheme nearby, or a higher density development of large executive homes.

The McEvaddys acquired the estate on the Dublin Road in Malahide for about €1.87 million in 1996. It comprises a lavish and architecturally significant mansion dating from 1779, which was restored at huge expense by the family.

In addition to the main house, the expansive estate also incorporates four large detached houses arranged around a courtyard, named Belmont, Belview, Elgin and The Lodge.

These buildings are understood to be former outhouses that were converted into luxury homes.

Under the terms of the deal to sell Auburn House, it is understood that Mary McEvaddy entered into a licence agreement immediately prior to the sale, which is likely intended to give her an option to remain in residence at the estate for an undisclosed period of time after the sale.

In all, Hollybrook’s investment vehicle Kinwest has assembled a substantial contiguous site of just under 15 hectares (37 acres) in one of Dublin’s most valuable and exclusive suburban pockets, with funding provided by the Cardinal Capital Group.

The last land deal of this scale in the area was in 1996, when Parkway Properties acquired an adjacent 16.6 hectare (41 acre) site zoned for no more than 50 houses for over €3.8 million.

The developer went on to build Abington, commonly referred to as “Millionaires’ Row” for its array of large detached houses and high-profile residents, who included business figures and celebrities alike.