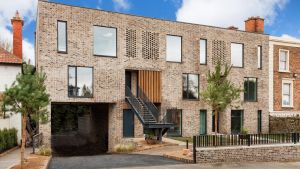 Copeland Place at 63 Howth Road in Clontarf is the latest development by Treverbyn Properties, headed by old friends Gerry Burke-Kennedy and John Desmond.

The half-acre site came to the market in 2015, when it was seeking €1.75 million. There was lapsed planning permission that had been originally granted in 2006, for a scheme of 31 apartments: 28 two-beds, and three one-bed units with basement car parking.

Instead, what was developed by Treverbyn is a scheme of nine high-end units comprising eight houses, both terraced and semi-detached, and a two-bed duplex apartment.

The first launch of the scheme, which are properties to the front of the development facing Howth Road, is now on the market through joint agents Sherry FitzGerald and Stanley Estate Agents, and comprise two four-bedroom houses extending to 170sq m (1,830sq ft) and a two-bed duplex apartment measuring 105sq m (1,130sq ft) with prices at €875,000 and €610,000 respectively.

This is the fourth project by Treverbyn, who last year completed a 14-house scheme at Sycamore Grove in Glasnevin, in addition to a five-house development in Crumlin and a Georgian conversion in Churchtown.

The exterior of these properties is deceptive, as it gives little indication to the internal space. Both houses are set over three floors, while the apartment is a duplex.

“We wanted a similar elevation to the period houses along the street, which are two-storey over basement,” says Burke-Kennedy, of the ODOS designed properties, which have contemporary steps running at the same level as the granite steps of their peers next door.

At garden level, along an entire corridor of hidden storage is the fourth-bedroom (which could equally work as a super home office) and a bright double-height kitchen that opens out to the rear garden, in addition to a hidden utility space.

It’s all very contemporary in the Minima-designed interiors, with gunmetal-grey kitchens by Kube, and the stain, heat and scratch-resistant Dekton island set on Spanish tiled flooring.

The properties have underfloor heating on all levels, run by a low-energy heat pump, giving the properties a highly efficient A3 BER rating.

On the middle floor there is a spacious living room, flanked on one side by the open space above the kitchen and a wall of triple-glazed windows – for added insulation and sound-proofing against any noise along Howth Road.

The entrance at this level is accessed via contemporary steps, which lie behind timber slats at the doorway – a signature detail of ODOS architects – and adds both privacy and interest to the Belgian brick facade.

The upper floor is incredibly bright thanks to glazed panels in the ceilings and Juliet balconies in the three double bedrooms. The principal is en suite and decked out with Porcelanosa contemporary tiling and sanitary ware.

There are two car park spaces for each house in the cobblelock courtyard to the front of the properties, and a maintenance-free rear garden with a lawn and patio dining space.

The location is popular for its seaside promenade – just a 10-minute drive from the city – and its proximity to the Dart, which is a four-minute walk.