Limerick stud where Nixon stayed and champions were bred for €5.5m 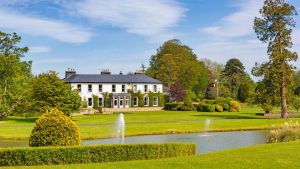 Good land is worth its weight in gold, or so they say.

At Kilfrush Stud in rural Co Limerick, the limestone enriched land is so good that horses born here seem to have that magical extra ingredient that turns a thoroughbred into a champion. Take Last Tycoon, bred here in 1983. A beautiful dark bay with a white star, he won the $1million Breeder’s Cup in the USA, at odds of 36 to 1.

Is it fair to ask horse lovers to pick a favourite?

Estate and stud manager David Ryan doesn’t hesitate, even though he has more than 80 winners of major races to choose from: “Immortal Verse,” he says, before going on to reminisce about the filly with the lovely temperament, that went on to fetch a record 4.7million guineas at auction in 2013.

It’s a figure that puts the auction guide price of €5.5million for Kilfrush (with Jordan Town & Country estate agents) into perspective.

The 286-acre estate first changed hands when Irish American businessman John A Mulcahy acquired it from original owners, the Gubbins family. They had sold it after enjoying it for more than 100 years. No small thinker, Mulcahy had heavily backed the campaign of president Richard Nixon, who repaid the favour by visiting him at Kilfrush.

Ahead of the visit, the coachyard, adjoining the 1,027sq m (11,054sq ft) original four-bed Georgian house, was converted to add an additional 1,386sq m (14,918sq ft) of space, including three huge bedroom suites and a leisure complex with swimming pool, gym, hot tub and sauna.

As all this took place in 1970, there’s now a certain retro-style to the “new” wing, which also includes a vast entrance hall, complete with large gold American eagles flanking the fireplace, and a bar for parties; but the older part of the house is classic Georgian.

The dining room, where Nixon feasted on a staggering menu of smoked salmon, oysters, scallop soup, consommé with sherry, steamed salmon with hollandaise sauce, pigeon crust pie, boiled bacon and cabbage, lamb stew and fillet of beef and baked potatoes is hung with a elaborate Waterford chandelier, included in the sale.

Henry Kissinger was, apparently, relegated to a secondary dining room, although according to local memory, he was absolutely hilarious. The bedrooms in both the original house, and the 1970s wing, are vast, so for any buyer seeking more accommodation, they can easily be divided.

The master bedroom looks out over a lake, complete with fountains, and tree house with veranda overlooking – ideally positioned for sundowners. The kitchen is fitted to catering standard, and there are also wine cellars, and staff accommodation included. Beyond this there’s also a charming four-bed manager’s house, gate lodge, stud office and two more staff houses on site.

Adding to the old world charm are 6.4km of internal walks and roads on the estate, including a pair of Ladies and Gentlemen’s walks, that wind around mature trees, eventually meeting so that the sexes can pair up to return to the house.

Ryan who, with his wife Mary, has been looking after things at Kilfrush for more than three decades, points out the shelter belts of mature trees, “how long would it take you to plant them?” he muses. “You couldn’t do it in a lifetime.”

It was Paris-based businessman Jean Pierre Binet who turned Kilfrush from a dairy farm into a stud farm, and he and, most recently, current owner, Qatari businessman Mubarak al-Naemi, have been breeding horses here ever since.

Alongside all the fine grass land up for grabs, there are 73 boxes in a main and outer yard. There are foaling boxes, complete with cameras, an isolation yard, nursery paddocks, barns, tack and feed rooms and a horse walker.

These are the facilities most likely to attract buyers to bid at the auction, scheduled for July 24th. The fact that it is located only a half an hour from Limerick, or the idea of waking up to the sight of fountains playing on the lake, or the lure of sleeping in Nixon’s room are most likely secondary considerations. But imagine the dinner party conversations. And the bragging rights.