Love all on a hidden acre on Blackrock's Avoca Avenue for €5.5m 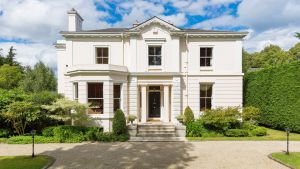 lackrock is a sprawling southside suburb with many fine roads, stretching from the sea to the N11, though arguably Avoca Avenue is the most prestigious – it’s certainly the road where multimillion euro houses have been the norm for very many years.

The road has always been a magnet for successful entrepreneurs and members of the legal and medical professions and the most sought-after houses are the substantial Victorians on sites large enough to afford a great deal of privacy.

Indeed, so private is Redwood on Avoca Avenue that the 530sq m (5,704 sq ft) two-storey over basement double-fronted house – sitting on an acre – can’t be seen from the road. And unusually, when the rear garden was landscaped to build the full-size tennis court which sits alongside a great swathe of lawn, a strip of land was left beyond the boundary walls with a perimeter of trees planted to ensure complete privacy.

It’s not too much of a leap to guess that the house took its name at some point in its existence from the magnificent pair of redwoods in the front garden. Built in the second half of the 19th century it is a solid Victorian, with its gracious interior easily imagined from its imposing exterior.

The owners bought in 1988 when the house needed upgrading and shortly after they extended, not adding, as might be expected, a large kitchen (they had already reworked some rear rooms to create a kitchen and adjoining breakfast room) but a room the family call the pavilion. That comfortable informal living room overlooks the flood-lit tennis court, much played upon by some of their children who competed to a high level.

The proportions and simple layout of the house are more typical of an earlier build than the more decorative 1860s. Off the wide hall, floored with chequerboard tiling, are the home’s grandest rooms – two interconnecting reception rooms, the decorative plasterwork on their high ceilings intact and with a bay window to the side where a grand piano sits, an indication of the scale of these rooms.

That’s in the back reception room which also features an original pair of tall and wide sash windows which reach to the floor – the bottom half raises to give access to the back garden via a flight of granite steps. It’s a lovely original feature. To the side of the house at hall level to the front, is the third reception room, a good-sized drawing room with a deep bay window decorated in muted red tones. There’s also a study on this level and a very large utility.

Upstairs are six bedrooms, three mirroring in size the reception rooms below and two with en suites, and a family bathroom. There is a basement, access is down a back stairs near the kitchen, and fitted out as a gym.

In a house where original interior features abound, it’s the exterior ones that will also have strong appeal for buyers. At the end of the garden is a beautiful Victorian greenhouse – it needs a complete restoration but is a lovely addition to the garden. And to the side of the main house are the original stables and coachhouse (100 sq m/1,075 sq ft ) and outhouses which could be converted into living accommodation. Those restoration projects may be considered optional by new owners who – at this top level of the market – are more than likely to redecorate throughout and update the bathrooms and kitchen before they move in.

They may even extend at the rear – subject to planning permission on this protected structure – to create a spacious eat-in family kitchen with better access to the large back garden.

There are electric front gates and parking for several cars on the sweeping, gravelled driveway.

In 2016, number 14 Avoca Avenue, across the road from Redwood, was the top sale of the year in Dublin, selling for €4.355 million after just a few months on the market. It has since been greatly extended and renovated.

Houses at this very top end of the Dublin market often come for sale “quietly” or “off-market” long before a “for sale” sign is affixed to their front wall. And that is the case here – while Redwood was not marketed locally it has been promoted internationally, appearing in the New York Times property supplement in late 2017 seeking $7,285,362 (about €6.5 million). Now it is on the open market through selling agent Sherry FitzGerald seeking €5.5 million.

Married to Gene Kelly: 'He didn't seem that old to me'
3