Vico Road house in Killiney sells off market for top price this year of €5.5m

Strawberry Hill House, a coastal Victorian villa in Killiney, is understood to have been purchased by a UK-based expat 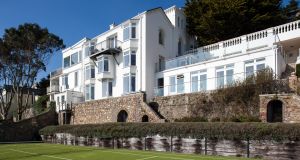 Vico Road: the property has tiered lawns, a tennis court, orchards and a gym with fantastic sea views

A Victorian villa with expansive sea views on Vico Road has quietly become the biggest residential sale of the year so far. Strawberry Hill House on 0.75 acres in Killiney, once owned by Rick Savage from Def Leppard and later by aviation tycoon Declan Ryan, sold in recent weeks for about €5.5 million.

The 702sq m (7,560sq ft) property wasn’t exactly snapped up when it was placed on the market in 2016. Architect owner David Murphy originally sought €6.5million, but, like many properties in the “prime” price bracket, it failed to sell and was removed from the market late last year. Its recent private sale is understood to have been completed off-market through selling agent Vincent Finnegan to a UK-based expat buyer. The new owner plans to use the five bed as a second home.

Situated below Vico Road on the southerly slopes of Killiney Hill, it’s an interesting house with an unassuming road entrance. It was once divided into three units, which have since been amalgamated. Murphy purchased Strawberrry Hill House from Ryan off-market in 2005 and extensively upgraded and extended the property, which has tiered lawns, a tennis court, orchards and a gym with fantastic sea views.

A number of high-end luxury homes have been on the market in the area for some time, all with multimillion euro price tags. Strawberry Hill’s strong sale – albeit at 15 per cent below its original asking – could provide a shot in the arm at the top end.