Ride out to pristine Meath sporting estate for €9.25m

A Swedish businessman transformed Dollanstown Stud on 365 acres into a world class event riding and training facility, with a fine restored main house and 11 estate dwellings 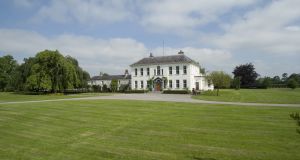 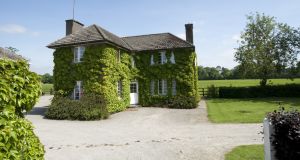 When businessman Lars Bjoerk moved to Ireland from Sweden in 1970 his love of horses was a major driving factor. An accomplished international event rider, he sought out elegant country homes with land enough to keep and train champion horses.

An entrepreneur, he and his business partner opened a manufacturing facility, Irish Cable and Wire, in Athlone, Co Westmeath. It was one of the first big employers in the town in the 1970s and later it sold to Alcatel in the 1990s. While there, Bjoerk completely refurbished and lived at Belmont House, a castellated manor house near Ferbane in Co Offaly.

Then in 1982, seeking a change of scene and closer proximity to the capital and the airport, Dollanstown Stud, outside Kilcock became available as part of the by then crumbling empire of the late Patrick Gallagher. The story goes that the controversial businessman had acquired Dollanstown in a swap with builder Joe McGowan for the Gallagher home, Hollywoodrath, near Mulhuddart, Co Dublin.

Prior to the 1980s, Dollanstown had produced a rich pedigree of racing champions including three Derby winners. Bjoerk acquired a neighbouring farm in 1992 and set about establishing an internationally renowned event course at Dollanstown that has hosted the Irish National Eventing Championships and the prestigious Future Event Horse League (FEHL) an important international series for young horses developed by Lars Bjoerk and wife Caroline (also a former international event riding champion).

As to the house, the main body of the property, dating from the 1700s, had been gutted for refurbishment at time of purchase. When Bjoerk moved in in the late 1980s he took up residence in a substantial courtyard wing of the house, which itself comprises three bedrooms and reception rooms arranged over two storeys. It can be accessed on both floors directly from the main house.

It wasn’t until 2000 that the Bjoerks refurbished the main house. The result is a tastefully completed country home with many restored original features, but with the added benefits of modern insulation and convenience including an “entertainment wing” for more informal entertaining that can also accessed from the rear courtyard.

The main hall, though grand, is more welcoming than imposing and features lovely original wood-finished cornicing and ceiling roses. The wide original staircase, once cited in an Irish Georgian Society publication as “one of the finest examples of an unpainted hand-carved wooden staircase in Ireland” has, thankfully, been retained.

Other features look to have been added including two very fine Bossi-style marble mantelpieces in the bright formal receptions, refurbished sash and case windows with original double-glazing imported from Sweden, wood panelling, timber floors and flagstones.

An impressive addition has been the dining kitchen area to the rear of the drawing room. Finished to a typical country style, it’s apparent many hours have been happily spent here taking in the south and easterly parkland views from an enormous bay window at the heart of the room.

“There are lots of happy memories here. It was always flat out preparing for events, and we often had national trainers for international events visiting and staying,” recalls son Henrik Bjoerk.

Planning is already under way for the upcoming Swedish midsummer party which Henrik says involves “a lot of vodka, strange songs and dancing like frogs”. The Bjoerks are well known locally and have loved their time at Dollanstown, but they acknowledge that the management of an estate of this size is really a full time job. They will stay in Ireland, and plan to find somewhere with a bit less work involved.

The bedroom accommodation is arranged off the fine upstairs landing, where an office space has been created to fully enjoy the elaborate cornicing, double height and natural light flooding through a tall arched window. The main bedroom suite includes a dual aspect bedroom, access to a roof terrace with views across the estate and a smartly finished dressing area cleverly concealing the laundry room. There are two further bedroom suites and two more sizeable bedrooms share a shower room.

The entertainment wing is located at ground level, and includes a very smartly finished service kitchen (from here there is direct access to the courtyard wing), dining room and drawing room. The somewhat unusual layout made sense because the property ownership has been shared between the Bjoerk’s and Lar’s German business partner, a lifelong friend. This layout will appeal to a buyer who may wish to share the property with extended family.

The stableyard is a fine example of its period with a cobblestone layout around a central water feature. It is more decorative nowadays and includes a courtyard cottage, a studio cottage and other outbuildings. There are more than ample facilities elsewhere on the estate including a picturesque four bed manager’s house and three bed farmhouse, and three gate lodges.

Dollanstown is located in the heart of stud country close to Bryanstown, Moyglare and Juddmonte studs. A working farm it also features excellent equine facilities including 70 stables, one indoor and two outdoor arenas, 11 estate properties, a covered horse walker, an event course and a number of fences. Its attraction for equine enthusiasts is apparent, equally its proximity to the capital and air links will make it attractive to an overseas buyer on the lookout for a sporting estate. Dollanstown Stud is for sale with Savills seeking €9.25 million.