One of the few surviving Georgian grand houses in the county, Browne's Hill House has a fascinating history 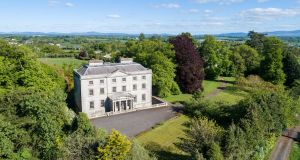 Browne’s Hill House, Co Carlow: Sits on five acres of grounds that include a large enclosed courtyard with buildings.

For most people in Carlow, the name Browne’s Hill is synonymous with the mighty dolmen that stands just outside the town. The Browne’s Hill Dolmen, which boasts one of the largest capstones in Europe, is named after a townland which, in turn, takes its name from the Brownes, the family who lived here from 1763 through until the 1950s.

As one of the few surviving Georgian mansions in Co Carlow, Browne’s Hill is a building of considerable historical value. The handsome mansion, which came on the market earlier this month – asking €990,000 – occupies the site of an ancient abbey that was granted to the Browne family from Essex in the 17th century.

The family descend from Sir William Browne of Abbas Roding, Essex, whose second son Robert came to Ireland as an officer with Oliver Cromwell’s army in the 1640s. His son, another Robert, was appointed Sovereign of Carlow by King Charles II and narrowly avoided a grizzly death during the Williamite wars.

By 1700, the Brownes were one of the most powerful dynasties in Carlow, owning property in both the town and county, as well as extensive lands in Dublin, Kildare and elsewhere.

Browne’s Hill House was built in 1763 for William Browne and originally comprised a detached six-bay, three-storey, over-basement structure, built in the Neo-Classical style with a granite ashlar façade. The house was instantly the envy and the inspiration for other gentlemen in the vicinity as the penchant for building Georgian mansions cranked up several notches.

At the time of its completion, three towers of the ancient abbey at Browne’s Hill were still standing. These were later either pulled down or fell naturally; some of the stone was reused for the park wall.

Within the house itself, generation upon generation of Brownes came and went, picking up the additional surname of Clayton along the way. They invariably served as magistrates for Carlow, frequently in the capacity of high sheriff or

deputy lieutenant. Some were churchmen but most were of a military bent.

Among the most prominent was Gen Robert Browne Clayton, who was made a Prince of the Holy Roman Empire by Pope Pius VI. His greatest legacy was the 94ft tall Corinthian column that he erected on his Carrigbyrne estate in Co Wexford. Restored by the Irish Georgian Society, the column honours his commander, Sir Ralph Abercromby, mortally wounded while leading British forces in Egypt during the Napoleonic Wars.

In 1842, another Robert succeeded to Browne’s Hill and commissioned the architect Thomas Cobden to redesign the house, with a pedimented central breakfront and a full-height canted bay to the rear. With the onset of the Great Hunger, Robert employed some 400 men to build five miles of high stone wall around the estate.

Two generations later, there was sorrow for the family when William Browne was killed in hand-to-hand fighting in Afghanistan in 1897. Prior to his death, he had become friendly with a young journalist reporting on the war by name of Winston Churchill. The future prime minister wept when he saw William Browne-Clayton’s lacerated body laid out on a stretcher.

William’s brother Robert inherited Browne’s Hill in 1907 and made his mark as a polo player in the Edwardian age. His wife Magda Weinholt was the daughter of a 300,000-acre sheep farmer from Australia.

The Carlow Sentinel reported on the “great rejoicings” at Browne’s Hill when the newlyweds came home. “On arriving at the front gate, which was beautifully and artistically decorated, the carriage was met by a large crowd of enthusiastic friends, and was drawn up the hill by many willing hands, while a fire of 21 guns . . . announced the approach of the procession.”

Magda made a robust impression as manager of the national school at nearby Benekerry, as one of the pupils recalled: “She walked in without knocking as was her right. We stood up somewhat falling over ourselves, so sudden was her entry. She made a bee-line for the teacher’s chair beside the open fire, and if the teacher happened to be sitting in it, she had to be out of it quickly, otherwise Mrs Browne-Clayton would probably have ended up on her lap. She listened to the teaching for a while, and then stood up suddenly, tall and gaunt and dark . . . and with a swish of tweeds made for the door.”

Éamon de Valera reputedly gave instruction that neither the family nor their house were to be harmed during the Civil War. Robert, who had risen to the rank of brigadier in the First World War, was also onside with Cosgrave’s government who appointed him to a special committee investigating grievances by ex-British servicemen in the Irish Free State.

He was succeeded in 1939 by his only son William, a keen huntsman, point-to-pointer and polo player. William’s wife Janet descended from James Bruce, the Scotsman who discovered the source of the Blue Nile in 1770.

William had dreamed of establishing an equestrian centre at Browne’s Hill but, under pressure from Janet, as well as bitter dispute with the local priest, he put the 700-acre estate up for sale in 1951.

William and Janet’s son Robbie, who died in 2014, was a British officer stationed in Berlin at the time the Berlin Wall was erected. He went on to be an agricultural, fisheries, food, forestry and countryside adviser to Margaret Thatcher.

Robbie’s older sister Magda is the last surviving member of the Browne family to have lived in the house. She is mother to Nic Dunlop, the photographer/author who tracked down Comrade Duch, Pol Pot’s chief executioner in Cambodia. Duch was subsequently sentenced to life imprisonment for his war crimes.

In 1953, Browne’s Hill House was purchased for in excess of £70,000 by an English syndicate headed up by Norfolk grain farmer GW Harrold, who hosted the Carlow Agricultural Show on the grounds. The syndicate also acquired the nearby 1,500-acre estate at Oak Park. There was considerable resentment by those felt that the two estates should have been acquired by the Land Commission and divided among local farmers. One morning Harrold opened a letter, bearing an Irish postmark, which contained a single bullet.

Shortly afterwards, the syndicate negotiated a deal with the Land Commission. Browne’s Hill House was put up for sale on 4½ acres with an asking price of £2,500. For several weeks, the best price offered was £1,800 from a Dublin buyer whose interest was in its salvage value after demolition. Fortunately, a number of last-minute bids were placed, and the eventual buyer was local travel agent Frank Tully and his wife Patty. They maintained Browne’s Hill as a family home through until Frank’s death in 2018. It is now on sale via REA Dawson and Sotheby's International Realty.

The entrance gates to Browne’s Hill were removed, purchased by University College Dublin and erected at the entrance to the Lyons estate, then owned by the college and later home to the late Tony Ryan of Guinness Peat Aviation / Ryanair.