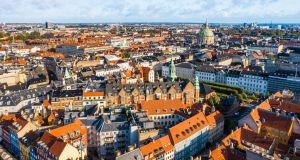 There is an assumption that an ever-higher number of apartments and houses per hectare, tellingly referred to as “units”, is a good thing. Driven by considered social strategies, that may be true. Driven by random applications by developers maximising profit, it may not.

Densification of housing in itself is no bad thing. Some of our most desirable inner suburbs have high densities. But leaving such an important issue to the vagaries of the market maximising its profit is not the most sustainable or equitable method of achieving appropriate densities.

The combination of developer-led design, ministerial directives and the short-circuiting of the decision-making process to An Bord Pleanála leads to excessive risk of fundamentally uncertain outcomes. The most likely one, in my opinion, is failure. I fear that we will end up with random pustules on the face of our cities, towns and villages.

For areas outside the core of the city, the proposed densities of recent applications of 180-400 units per hectare are patently destructive and basically wrong

But for Dublin, densities as high as Manhattan (232 homes per hectare), Singapore (240) and Beijing (260) are not appropriate for anything other than the centre of the city, where successful developments that have been built range from 100-250 homes per hectare.

For areas outside the core of the city, which currently have densities of about 25 homes per hectare, the proposed densities of recent applications of 180-400 units per hectare are patently destructive and basically wrong.

A decade ago, the Royal Institute of the Architects of Ireland produced a second book on sustainable housing, Building Better Communities, which illustrates best practice in housing. These have been very successful and have stood the test of time.

The densities cited were in the order of 130-230 homes per hectare in our inner cities; 70-100 in our inner suburbs; and 10-60 in our outer suburbs. Those sorts of levels of density have created sustainable communities in a human-built environment. The densities being proposed under the new Strategic Housing Development legislation and ministerial directives will not.

Do we really want our cities, towns and villages designed by developer-led planning and determined by unelected officials? That is what is happening now.

Before we inflict the most radical and destructive change to the character of the places we live, driven by a misplaced belief in market forces, without an overall framework or vision of what our communities will look like and how they will survive, someone must shout “Stop”.

We are about to unleash a seismographic change that, I believe, will destroy the spatial, visual and communal qualities of the places we live. We are about to build the wrong homes in the wrong places at the wrong price, at an enormous future cost.

The system of democratically based area planning through development plans has been subverted. Ministerial directives, under section 28 of the Planning Acts, have over-ruled plans prepared by local authorities, and approved by elected representatives after public consultation.

These have downgraded space standards to facilitate “build-to-rent” schemes and allowed for heights far in excess of anything permitted by local development plans.

The Strategic Housing Development Regulations of 2017 are a temporary measure to speed up the planning process. For large housing developments, planning decisions are no longer made by the local authority, but are made directly by An Bord Pleanála, and there is no right of appeal against a decision by the board.

These two factors have combined to generate an extraordinary scatter-gun approach to how Ireland’s cities and suburbs are going to develop, without reference to any overall plan for these areas. There is no longer any over-riding vision of how we want our cities, towns, suburbs and villages to look and function.

The State’s encouragement of this process is driven by a collective failure to make sufficient homes available to our citizens at an affordable cost. We have conflated the shortage of housing with creating a system that facilitates the needs of developers. This will not answer the needs of our society. Expecting private developers to provide a public service is doomed to failure.

It is not the fault of An Bord Pleanála that it has neither the resources nor the mandate to demand area plans to put these individual Strategic Housing Development applications into a physical, social and community context. I also fear an unquestioning assumption within the board that the higher the density is, the better.

Whether Covid-19 and future pandemics will have an impact on the desirable density of housing – both inside and outside – has yet to be seen. Having already dealt with the health impacts of overcrowding in the last century (at lower densities than most of the current applications), do we really want to force people into ever-closer proximity?