Take a trip down Tea Lane to hidden estate for €1.25m 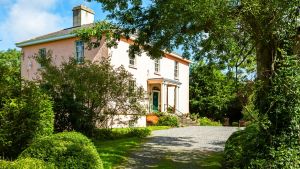 A large period house in the middle of 6.78 acres just off the main street of Celbridge, Co Kildare, is an unusual property with development potential that might also be bought as a private home.

Roseanne De Vere Hunt, head of Sherry FitzGerald Country Homes, is putting it up for sale by tender, a method preferred by developers – but wouldn’t discount the possibility that this country house hidden behind trees and high walls near the heart of Celbridge could attract a private buyer.

Celbridge Lodge, Tea Lane, Celbridge, Co Kildare, has a €1.25 million guide price and a deadline for tenders of 12 noon on Friday, September 25th. The house, a 428sq m (4,606sq ft) Georgian-style two-storey over basement four-bed built in the 1880s, is a protected structure in need of some refurbishment; it was home until his recent death of professional genealogist Harry McDowell, who lived there for 55 years.

When a property goes to tender, interested parties have to pay a refundable five per cent deposit on their offer amount by the tender deadline, and another five per cent on signing contracts.

McDowell, originally from Dundalk, and his late wife Joan bought Celbridge Lodge in 1965. Growing up there was “like living in a magical hidden world, with lawns, woods and a pond, just off the main street”, says his daughter Louise McDowell.

It’s not visible from the street or from the houses in neighbouring St Patrick’s estate, built in the 1950s. The house, built in the 1880s by local miller Giles Shaw as his home, later becoming a Church of Ireland rectory, is described in the National Inventory of Architectural Heritage as a “well-maintained middle-size gentleman’s residence in the Classical style . . . composed on a symmetrical plan of graceful proportions”.

Celbridge Lodge is rich in period detail: reception rooms have elaborate cornicing and centre roses, are painted vivid shades of red and yellow; bedrooms are wallpapered with rich patterns and a tall stained glass window at the top of front stairs sheds light into the entrance hall.

Many of the rooms are furnished with period pieces – McDowell was a member of the Irish Country Furniture Association – and it’s a sunny house, says Louise, where some reception rooms are dual aspect. It’s also home to his extensive library of Irish genealogical books, which will have to be sold.

The house is structurally in good shape, has been rewired and has a good roof says McDowell, but does need refurbishment. The kitchen needs to be replaced, as do bathrooms and the basement is likely to be completely revamped.

The one-bedroom gate lodge – which is just about habitable – is, like the main house, a protected structure, a designation which also includes the walls, gates and railings of the property.

These are all things that a developer would have to consider if buying to redevelop for housing. The 0.4-acre “very wild” walled garden which backs right onto Celbridge’s main street is the bit of the property zoned for Town Centre development.

Currently there are two access points into the property, with two more possible subject to planning permission. Roseanne DeVere Hunt says the €1.25 million guide price could attract either a developer or a private buyer – “I think it’s 50/50”.

A private buyer might be tempted by the idea of living in a house with a lot of land, in easy commuting distance of Dublin and walking distance from Celbridge town centre, she thinks.

Celbridge Lodge is at the other end of Celbridge’s main street from Castletown House, the Palladian country house built in 1722 for speaker of the Irish House of Commons, William Connolly. Famously saved from vandalism by Desmond Guinness and the Irish Georgian Society in the 1960s, the house and 120 acres of parkland are now open to the public and owned by the OPW.