Shop and bar could be converted into small business premises, leaving rest of substantial property as family home 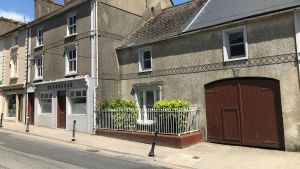 A shop frozen in time in a Co Tipperary village could be a movie set with its cobwebbed walls, rooms full of forgotten furniture and lovely old façade untouched by “improvements” of any kind.

Such is the state of Geoghegan’s – a former pub, shop and home on the main street of the village of Killenaule near Cashel in the Golden Vale.

Described by estate agent John FitzGerald of Dougan FitzGerald as “an authentic old business premises, coming to the market smack raw”, the property is on the open market for the first time in over a century asking €110,000.

The price has already attracted local businesses looking to expand but it might also appeal to city folk looking for a change of pace and a more affordable place to call home. The shop and bar (which has long lost its licence) could be converted into a small business premises, leaving the rest of the substantial property as a family home.

The premises closed for business in the 1980s, but remained home to Mary Ann Geoghegan until her death earlier this year. She had run the grocery shop and pub for many years, selling fresh milk from a small family herd as well as pints, whiskey and household essentials, some items of which are still displayed on the shelves.

The premises on main street was the family home of the Geoghegans, who lived there through most of the 20th century. Michael Geoghegan, a Limerick man who came to the area as a creamery manager – a post akin to that of bank manager – acquired the premises in the early 1900s through his first wife, a Kennedy. She ran the shop and bar until her death, and Geoghegan’s second wife, Nora Kelly, took up the running of the premises, eventually passing to on to her daughter Mary Ann.

The house was known for a time as Geoghegan’s Hotel as the family kept lodgers . As well as the shop and pub at ground floor level there is a large diningroom where the lodgers would have taken their meals.

A separate entrance from the street leads to the living quarters of the house via a long dim hallway with a quarry tiled floor and tongue-and-groove panelled walls.

At the back of the ground floor is a an old kitchen complete with Aga cooker. A scullery has access to a courtyard garden and cow byre, and beyond that is walled garden.

Up a steep flight of stairs there are two floors of bedrooms with five in all sharing a large airy bathroom complete with old cast iron bath and open fireplace. Some of the rooms have fine cornice work and striking fireplaces.

The house is furnished, and new owners may inherit a fascinating jumble of pieces. However, Geoghegan’s does need complete renovation.

“It was never mucked around with, and that is its charm,” says FitzGerald.