Live in Marlfield elegance in Wexford for €890,000 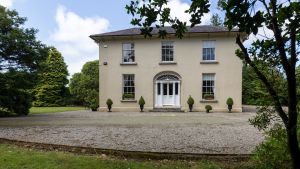 Minutes from Enniscorthy, but surrounded by idyllic countryside, Monfin House is a hidden gem. Devotees of Marlfield House, the award-winning country house hotel in Gorey, may recognise the opulent yet tasteful style, and they’d be right. Bought by Mary and Ray Bowe, the well-loved owners of Marlfield just over a decade ago, Monfin has been a retreat, a home away from hotel, so to speak. Ray died last year, and Mary is now selling to spend more time at Marlfield, says her daughter Laura.

Laura, her sister Margaret and their team have been exceptionally busy with the reopening of Marlfield, “It helps that it’s such a relaxing place, and we have so much space,” she says, when we catch up to talk about Monfin. “It was our family home,” she says of the house. “My parents moved to Monfin from Marlfield when they retired. The previous owners had been wine merchants, and it was lovely when they bought it, but still, they did a lot to it.”

That’s unsurprising, as Mary is renowned for her taste. “She redid the kitchen, and all the bathrooms – in gorgeous marble – bringing them to the standard the house would lend itself to. Everything was repainted, and there are new carpets and curtains. It’s rich, but not overdone, and there’s a lot of light everywhere.”

Laura describes the house as an ideal family home, and with five bedrooms – three en suite doubles, and two singles – there’s plenty of room for everyone. There’s also the potential for more, as the current layout gives the main bedroom suite a huge dressing room, which had originally been a separate bedroom. In all, the accommodation of the house dating from 1823, extends to 302sq m (3,250sq ft).

Downstairs, there are lovely formal dining and drawing rooms, as well as a library, study and kitchen-breakfast room. This leads to an enclosed yard, and there’s another yard beyond, with loose boxes and which opens onto a paddock. The property stands on three acres, including an old walled garden, and a potential buyer may wish to lease more land if they plan to fill the place with horses and ponies.

“It’s very quiet, the roads are really safe to ride out on,” says Laura, whose own family are equine enthusiasts. “If it was closer to home,” she says, “we wouldn’t be selling, there’d be a fight going on…” In fact, Monfin is just half an hour’s drive from Marlfield (it’s also five minutes from Monart), but so hands-on is the life of a hotelier that even half an hour can be a little too much.

Selling Monfin may be a wrench for the Bowe family, but it will give someone the opportunity to live in true country house hotel style. It’s on the market seeking €890,00 from joint agents Colliers and Warren Estates.

‘Therapy completely changed my life, once I gave it my all’
3