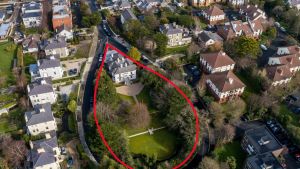 The first thing that strikes you about Innismaan on Queen’s Park in Monkstown is the site it occupies in one of the city’s more densely packed suburbs. Located in a cul-de-sac just off Monkstown Road, the perfect teardrop-shaped plot covers an area roughly equivalent in size to Belgrave Square’s residents’ park located just a block or two over on the sea side of that road.

The villa-style property dates from 1870, and it retains every bit of its original grandeur – and gardens – today. When owners Emma and Michael purchased it in 1995 for €440,000 – a princely sum at the time – all of their money went into the purchase, and with a young family they promptly moved in to the main reception room and set about refurbishing the property in phases.

While they had fallen in love with the house for its gardens, and the big reception room, the original provenance of the property had escaped them until one day a student called who was doing his thesis on the architect Alfred Gresham Jones. It was then that they discovered the eminent architect responsible for the National Concert Hall and the stunning French ambassador’s residence on Ailesbury Road had designed Innismaan – originally named Villa Carlotta – as his own home.

“Knowing this really inspired our interest to restore the house and garden to the pared-back symmetrical look of that era,” says Michael. Rose bushes were uprooted in favour of more formal lawned gardens and a rear extension running into the ‘v’ of the teardrop was removed and replaced with a small open courtyard.

Gresham Jones was also an early speculative developer and, having taken the 0.9 acre site at the heart of Queen’s Park for his own home, he completed six identical detached townhouses alongside as summer houses for the Dublin-based Victorian gentry. But he kept his best for Innismaan.

The perimeter of the property is guarded by tall trees save for the rear of the house, where the upstairs conservatory is visible from the road. Accessed via a discreet short driveway, the double-fronted two-storey property looks south across a gravelled sweep with tiered lawns cascading down behind. It’s a handsome villa with bay windows along each side drawing in light from east and west, wrought iron flowerboxes under the windows and a railed flight of curved granite steps leading up to the double front door.

From the moment you enter there is a great sense of space (3.9m high ceilings) and symmetry to the design. An arched marble hallway divides the length of the property to the rear conservatory and a glass dome overhead floods light into the heart of the house. From the front door, passing traffic is visible on Monkstown Road about 150m distant. Similarly, the view from the kitchen at the far end of the house extends out the front door to two tall cypresses flanking the central path of the formal garden.

The interconnecting drawing rooms off the main hall are a real showstopper. Beautifully proportioned with parquet floor, wide double bay windows and an elegant dividing arch between the two, it’s a space made for entertaining. Each room has an imposing fireplace at its heart and all the period flourishes of cornicing, centre roses, architraving and gleaming brass are here in abundance.

Previous owners, the Stakelums, were keen entertainers and for years after Emma and Michael moved in they would meet people who would rave about the nights they had danced away in this room.

“It’s a great room for entertaining, and can easily take a hundred people. You can sit 40 at a table, or arrange a series of smaller dining tables. It’s very much a room for enjoyment that’s part of the house as opposed to an occasional room,” says Emma.

This is helped by the fact that all the reception rooms are on this level. Across the hall is the snug family sitting room and down from it a discrete den designed as a hangout space for their three sons. Each has a fine bay window, and space has been cleverly carved out in the den to allow a cloakroom and guest toilet on either side.

The kitchen stands at the end of the hall with a central stained glass doorway leading out to the rear conservatory. The bright triple aspect room was done by architect Alfred Cochrane in 1997 to a curved design and features carved units in dark cherry with beech floor and worktops. Finished in stainless steel, it has stood the test of time remarkably well and sits comfortably with the many Art Deco references in the interiors.

On the lower level and divided by a central stairs are the property’s original four bedrooms to the front of the property, and to the rear what had been a series of games and steam rooms was reconfigured completely by the third Alfred involved in Innismaan’s design architect – Alfred Jones – who added the rear conservatory and new downstairs accommodation.

These newer rooms are a luxurious addition. A guest suite is self-contained and opens out to its own small courtyard, while the games room is ideal for a growing family to entertain friends with access from here out to a sunny west-facing terrace with a pedestrian gateway. The popular bathing spot at Seapoint is less than a 10-minute stroll.

The current owners retained the kitchen upstairs for light and proximity to the other reception rooms, but it’s possible whoever buys Innismaan will choose to reconfigure things again here, in particular if they want direct outdoor access from the main kitchen-dining hub of the house.

A lovely home study/office on this lower level was created from the old basement kitchen with a high granite hearth. With deep sill sash windows and a door out to a Victorian grotto fountain, it makes for ideal consultation rooms with a pathway from the main entrance to allow direct client access.

The gardens are simple in layout with a series of lawns bordered by planting, cornerstones, and central and surrounding pathways. A laurel hedge and two tall cypresses bound the upper tier, with lawns on two further levels below. At the end a gazebo tucked into the corner looks onto a fine space for five-a-side soccer or long summer evenings. It’s an oasis in the heart of the busy suburb.

All 5,600sq ft/520sq m at Innismaan is in walk-in condition having been replumbed, rewired, damp-proofed downstairs and every sash window restored. It’s clearly a much loved home designed for every aspect of modern family living at a remove from the bustle of daily life. The property has been placed for sale through Sherry FitzGerald seeking €4.25 million. Selling agent Rosie Mulvany says Monkstown is proving “hugely popular” because of its vibrant strip of shops and good restaurants with particular interest in the area among families returning from overseas.